This lower ground floor Victorian flat has suffered from poor refurbishment. There is a leak coming from the bathroom. 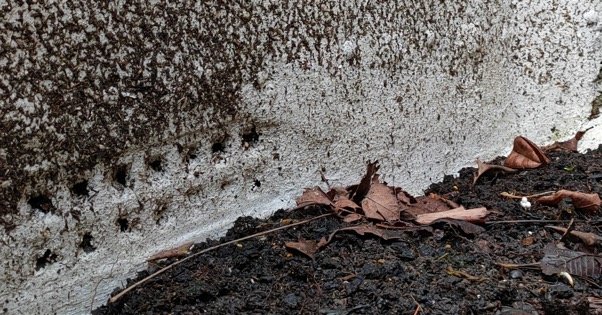 The button shapes above the line of the sub floor vent, look like a row of caps sealing chemical damp proofing.

Despite the low risk of rising damp, there appears to have been an attempt at chemical treatment against rising damp. Rising damp treatment is normally a sign of insufficient ventilation. The walls have been drilled into by about 200mm and injected with damp proofing chemicals. In theory the chemicals are absorbed into the brick pores reducing the bricks ability to absorb moisture. Walls are replaced with damp proofers slurry. This can cause problems with absorption imbalance, resulting in increased condensation on other walls or vapour becoming absorbed and trapped behind the slurry. There was evidence of surface condensation in areas probably not treated with replacement plaster but no evidence of trapped vapour. The solution is through ventilation and humidity control. 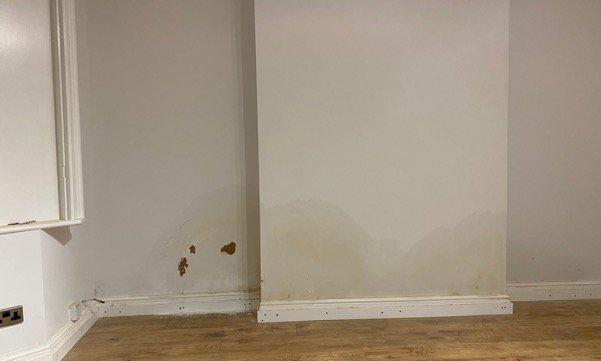 In the front room there is a light brown stain on dampness around the chimney breast.

A water stain results from moisture constantly moving through brick and timber. It is typical of a leak or penetrating damp. The damp look probably results from hygroscopic salts. These salts are often released by chimney breasts, see later. The structure of chimneys breasts means they absorb more moisture, therefore can appear worse than they are. Despite appearances, I do not think that the source of water is necessarily the chimney breast. 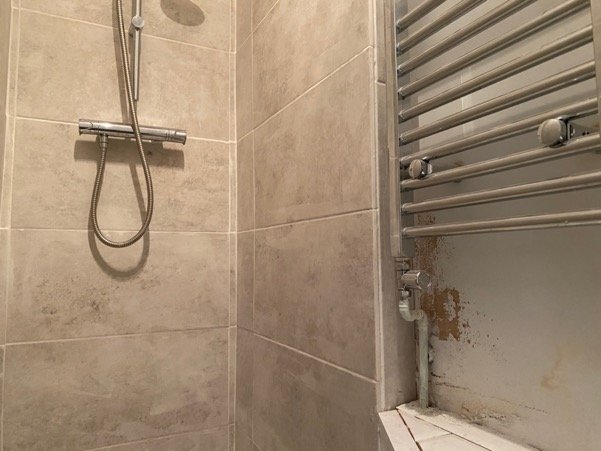 There are surface salts and staining along the right-hand wall, particularly in the bathroom.

The bathroom is similarly discoloured but doesn’t have hygroscopic salts. It therefore seems more likely that the source of water is in or near the bathroom. 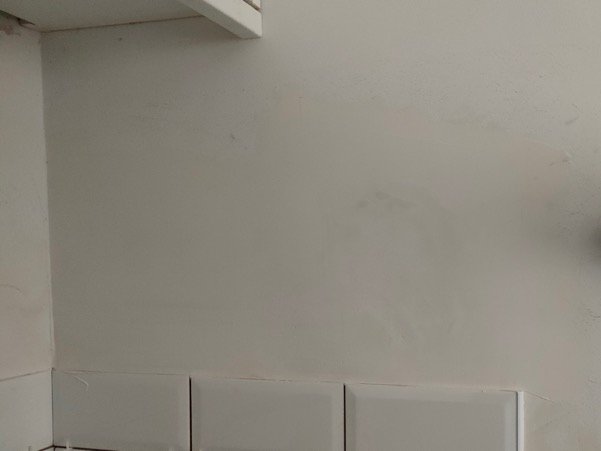 There is also a dampness high up the wall on the other side of the bathroom, in the kitchen and corridor. 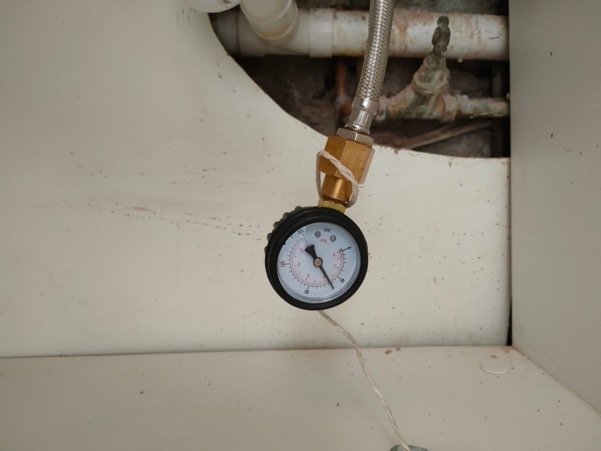 The leak is most likely to be occurring in or near the bathroom. 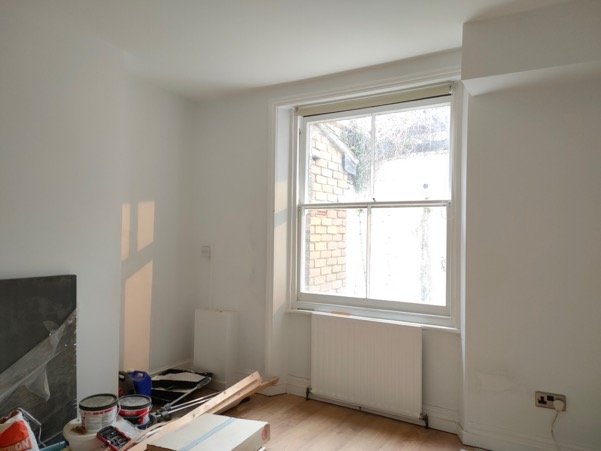 The rear room has damp spots on either side of the window. 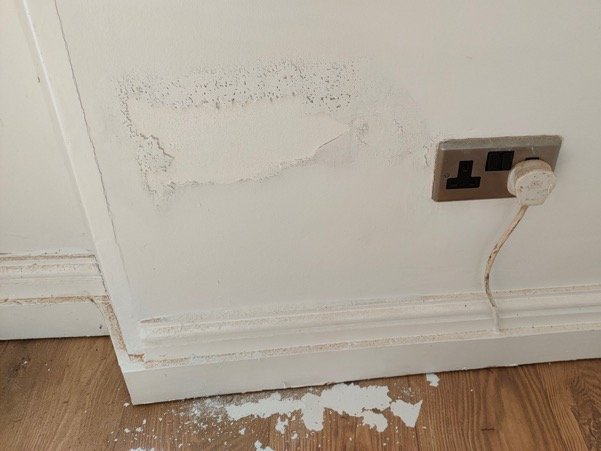 There is some colourless dampness with crystalised surface salts, this is calcium sulphate.

Calcium sulphate is a key ingredient in cement and other materials. If diluted in water salts tend to move to the surface. These can be removed with sandpaper and decorated. Calcium sulphate result from constant wetting and drying, so it is most commonly associated with condensation. 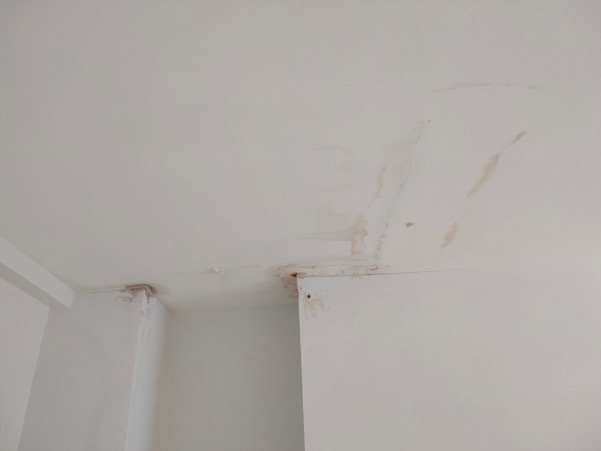 There is water damage on the rear room ceiling.

Using a damp meter in radio-frequency mode I was able to determine that the ceiling is dry despite the stain.

I could not find any high damp meter reading on or around the ceiling, suggesting that the leak, which is clearly coming from the flat above, has been repaired. You can sand away the salts and often redecorate without the need of finishing coat of plaster. It is wise to monitor the ceiling for dampness in case a leak return. 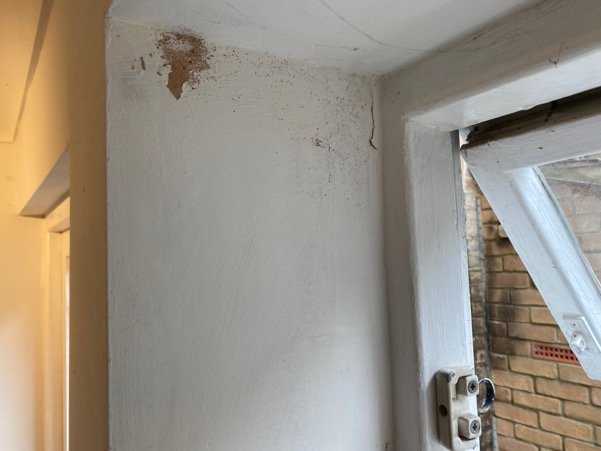 There are patches of calcium sulphate salts near window openings.

As discussed, these salts are a sign of evaporation following condensation. Window surrounds are poorly insulated and therefore at greater risk of condensation. The window was open at the time of the survey. However I suspect that it had been left closed at the time that condensation first started appearing. 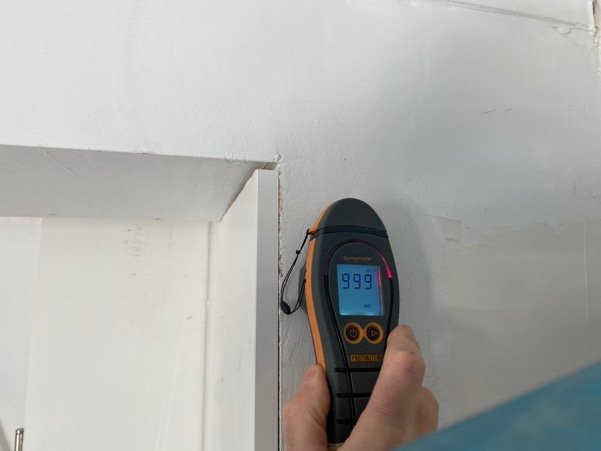 In the kitchen there are high damp meter readings around what appeared to be a steel joist (“RSJ”). 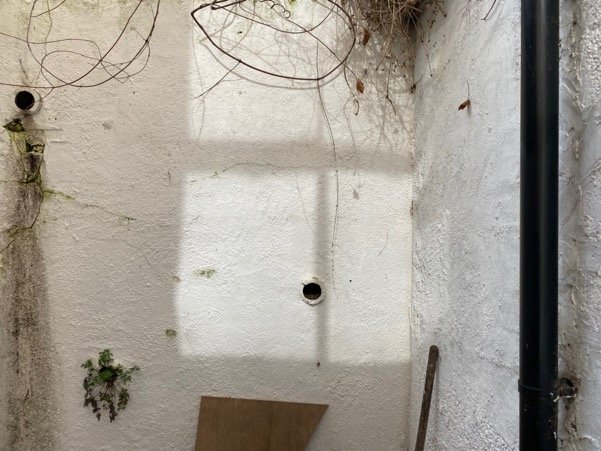 Looking outside we can see a retaining wall with weep holes, water is coming out of one.

This suggests that there is hydrostatic pressure from rainwater falling on the hill behind the property. It doesn’t appear to be coming through on the back wall of the kitchen, but be aware that there almost certainly is water behind the rear kitchen wall. 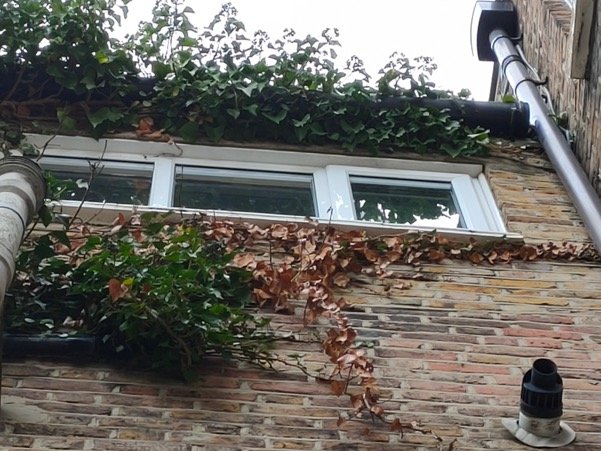 Ivy growing along guttering to the property above looks like it may cause rainwater to overflow.

Currently there is no sign that this guttering is causing dampness to your flat.

The flat is vacant and there is a window open. However, it will need much more ventilation when occupied. 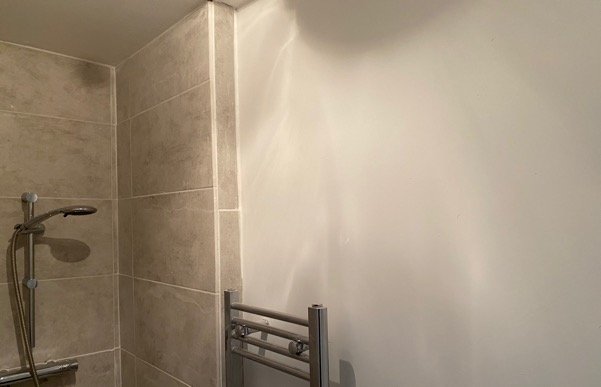 There is no ventilation in the internal bathroom. Lower ground floor flats need good ventilation. 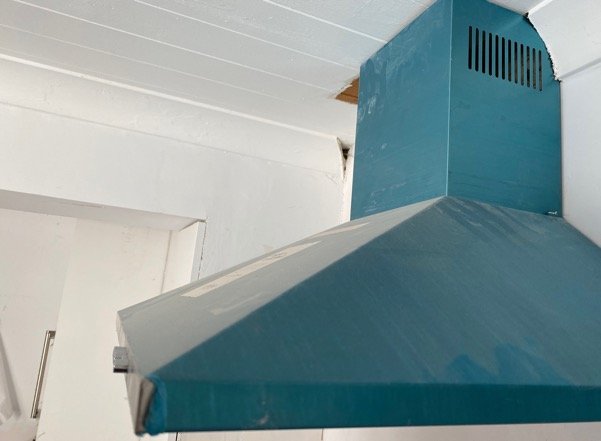 There is no external ducting to the kitchen extractor fan. 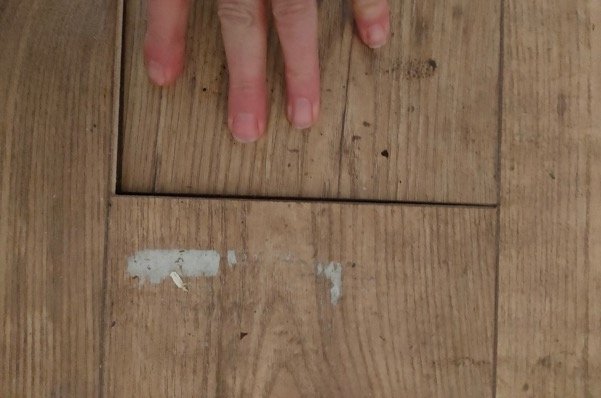 I’m concerned about the floor which had too much “give” in it.

The floor, especially in the corridor is poorly supported underneath. This either results from sub-floor rot or other forms of damage. 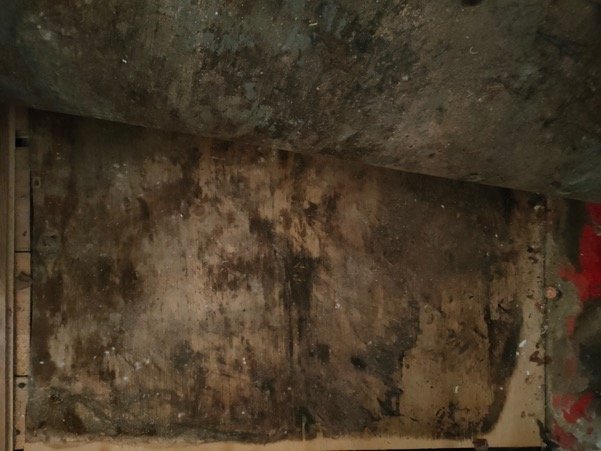 Looking under the doormat, there are stains from what looks like strands, potentially from rot.

You should assume that there is rot unless it is demonstrated otherwise and anyway the floor should be fixed so that it is fully supported throughout.

From the way the floor and dampness is behaving, I suspect that the floor is a thin timber laminate overlayed on batons (or similar), which are laid on a solid screed floor. You should ask the vendor for details. There is insufficient sub-floor ventilation for a normal suspended timber floor, this would not be a problem with a solid floor so long as there is no leak. 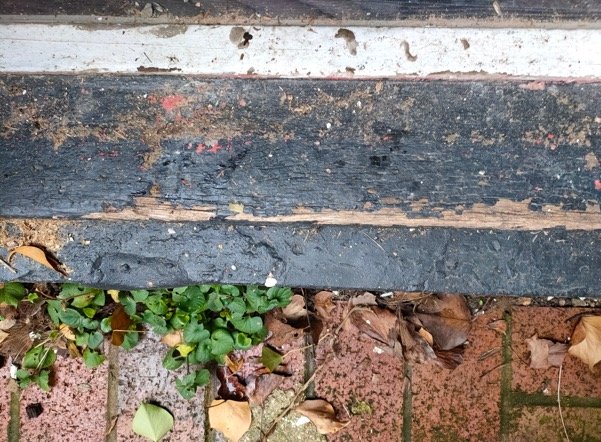 There are early signs of window rot.

Phellinus contiguus or window rot is very common in old properties, it is a slow growing white rot. None of the timbers are structurally significant. The rot can be cut out, sanded, filled and painted for protection. 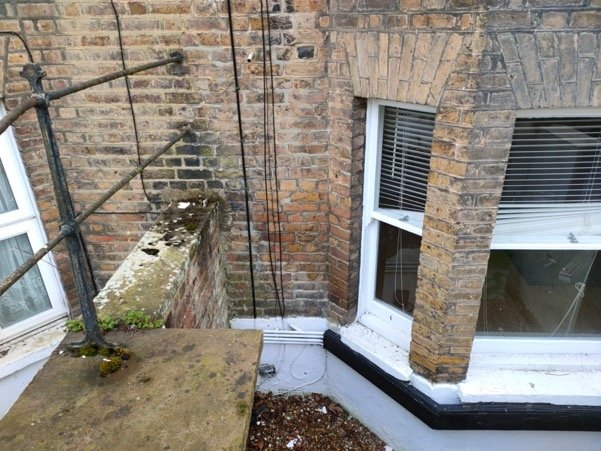 Looking externally there is a dark patch between the buildings suggesting rainwater occasionally overflows.

You should look to see what happens to rainwater goods during a rainstorm. 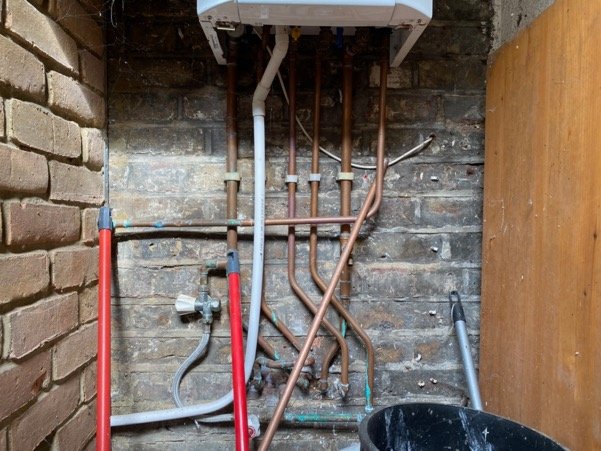 The external boiler housing is a good way of maximising internal space.

However, pipes should be insulated otherwise you’ll be wasting energy.