This large Victorian terraced house had some condensation in the kitchen, nothing major – possibly another victim of Hart v Large.

Condensation from insufficient use of kitchen ventilation, cold wall and poor airflow.

There is disruption to the base of the wall in line with the top air bricks probably from chemical damp proofing.

I tested all walls using a Protimeter damp meter. No high damp meter readings were detected in the reception.

I tested the surface on the inside at the base of all external walls every metre, chimney breasts and a sample of internal walls with a Protimeter damp meter in conductance mode. These meters measure electrical conductance of salts in water, a proxy for d Readings below 20WME are considered dry. The range is 8WME to 99WME. See surveyor.tips/dampmeter. Walls measured were largely dry on the surface except where mentioned in this report. 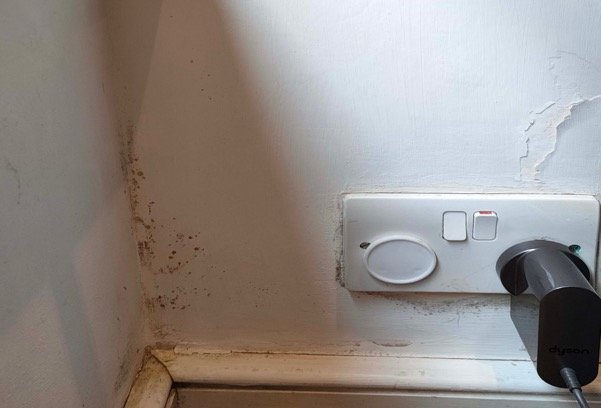 In the kitchen bay, there is mould growing on the wall and there is flacking paint above the socket.

Mould is a sign of excess humidity. Mould grows where relative humidity exceeds 85%RH for 6+ hours. See surveyor.tips/mould. Flacking paint is typically caused by condensation diluting calcium sulphate, a key ingredient in cement, moving to the surface and crystalising. Flacking paint and salts can be removed with sandpaper. Metal in wiring causes heat loss. 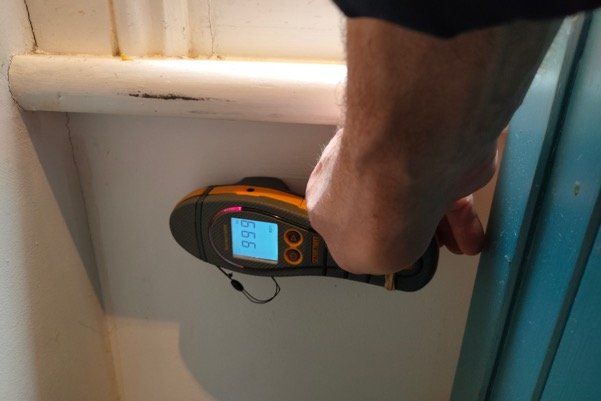 Using a radio-frequency damp meter I detected damp deep within the wall up to window level.

I also tested walls in radio frequency mode. Water reflects radio waves at a set frequency similar to mobile phone shields. Meters can’t differentiate moisture from other dense matter such as metal and concrete. They help trace damp in a normal, homogeneous wall.

Readings below 300 REL indicate that a wall is dry below the surface, 999 REL is the limit. These meters are for scanning, mapping and profiling, see surveyor.tips/profile. 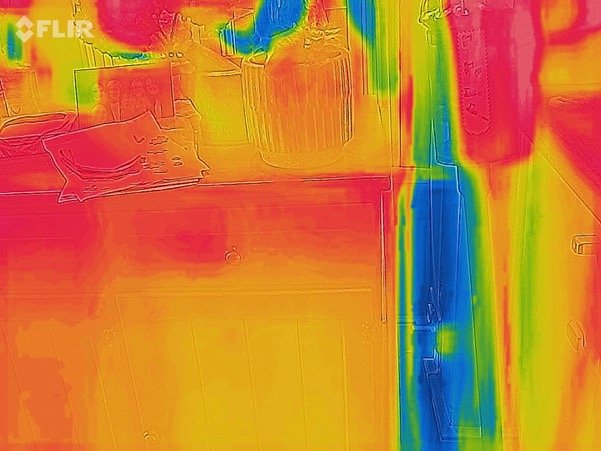 Using an infra-red lens, looking at the bay behind a chest of drawers, we see the blue of the cold bay wall. 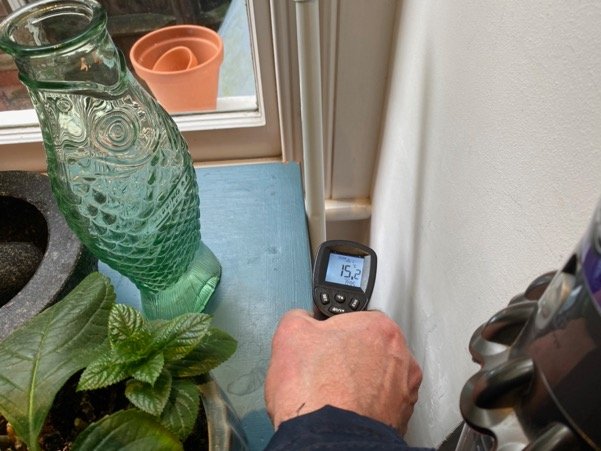 The corner of the wall measured 15.2°C compared to 18.7°C ambient temperature. 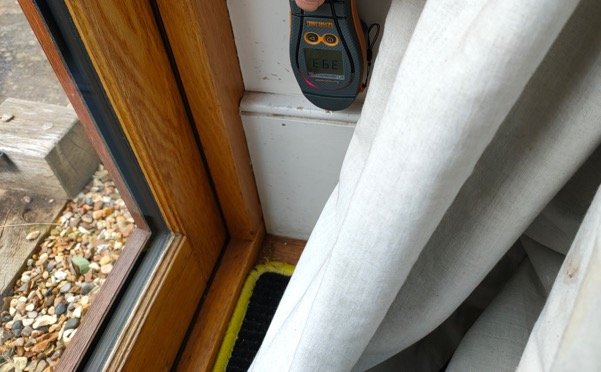 There was a marginally high damp meter reading is by the opening to the door.

Door and window openings have less insulation than a standard wall and therefore are at risk of condensation and mould.

The kitchen extractor fan is ducted up the chimney. I understand the vendors typically don’t use the extractor fan when cooking. There is nothing wrong with venting up a chimney. However, they are best run for longer to reduce risks of humid air falling back down. 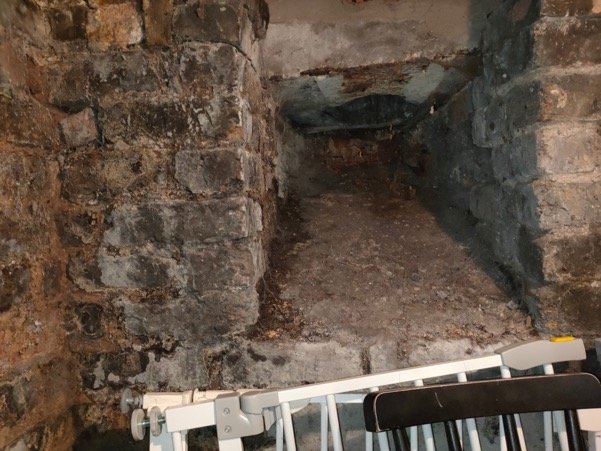 The cellar was reasonably dry, with no signs significant of rot.

Many of the bricks would dry below the damp proof course which they wouldn’t be if there was rising damp. There is some condensation forming to the front underneath the cold metal coal shoot lid. This is normal. 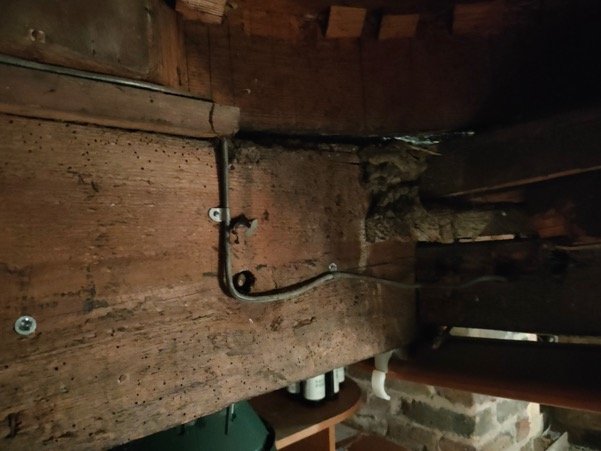 Signs of woodworm in the cellar, on a floor-board and joist. The woodworm is unlikely to be active.

Woodworm is common in old properties. It is very rarely active. If it were active, then there would be frass (larval excretion) under it. See recommendations for woodworm. 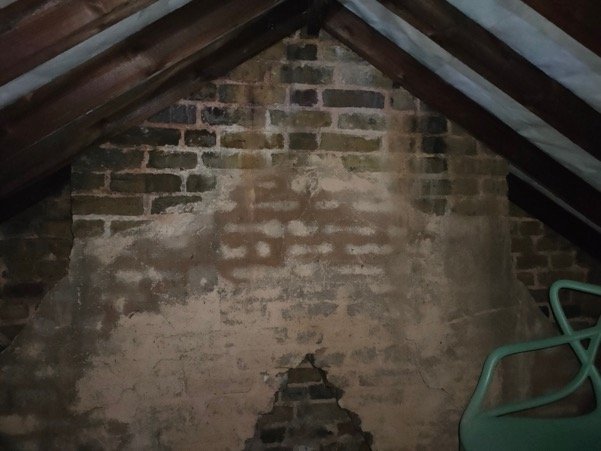 There is dampness on the chimney breast in the loft.

Dampness coming through the chimney breast will evaporate into the loft. The loft is sufficiently ventilated. There are no signs that this dampness is causing either mould in the loft or dampness to the habitable spaces below. 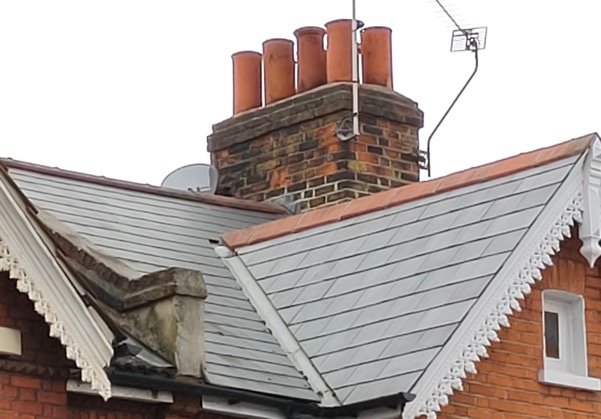 The chimneys don’t have cowls, water is falling down through chimney pots.

Fires places are not in use, therefore there is no heat flowing up the chimney breast to evaporate away water. There is no urgency but at some stage consider stalling cowls, perhaps with your neighbour. You may find the access easier and costs shared. 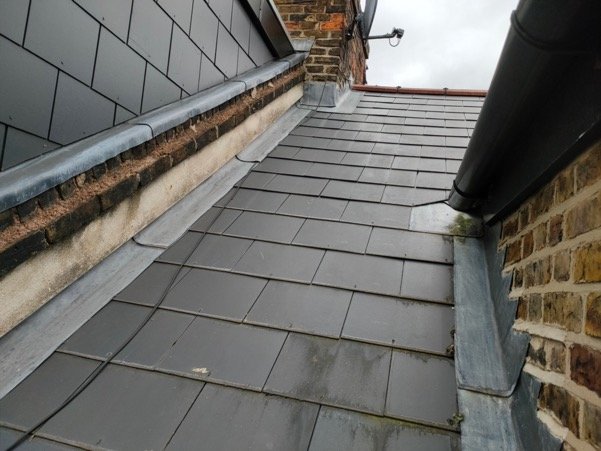 This is not a roofing survey, but generally the roof looks to be new and in relatively good order. 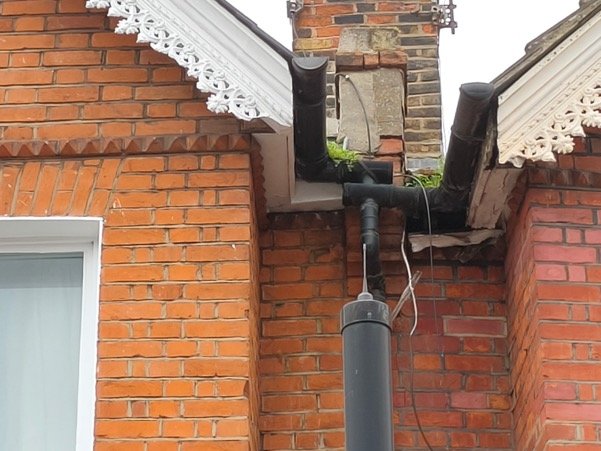 There is plant growth to your and your neighbours’ front gutter.

It looks like your neighbour’s downpipe could be blocked as the timber soffits below their gutter appear to be damaged. You should work with your neighbour to clear the gutters and downpipe. 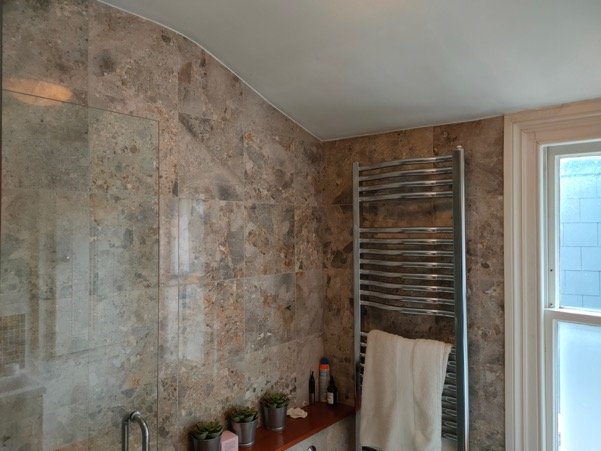 There are no bathroom extractor fans. The vendors keep the windows open. 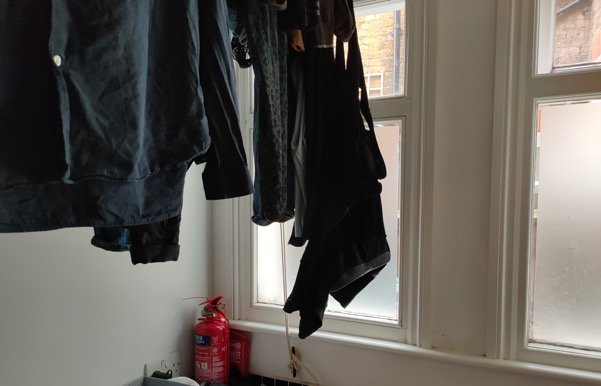 The utility room has some signs of past condensation from drying clothes.

Consider installing an extractor fan into the utility room or using an externally vented dryer. 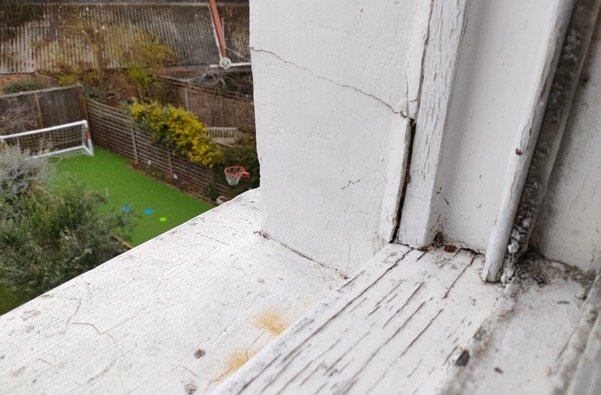 There are some early signs of timber rot around the windows.

Some timbers have been affected by Phellinus contiguus or window rot. Window rot is very common in old properties, it is a slow growing white rot. None of the timbers are structurally significant. The rot can be cut out, sanded, filled and painted for protection.

Note also that there is a crack in the render. 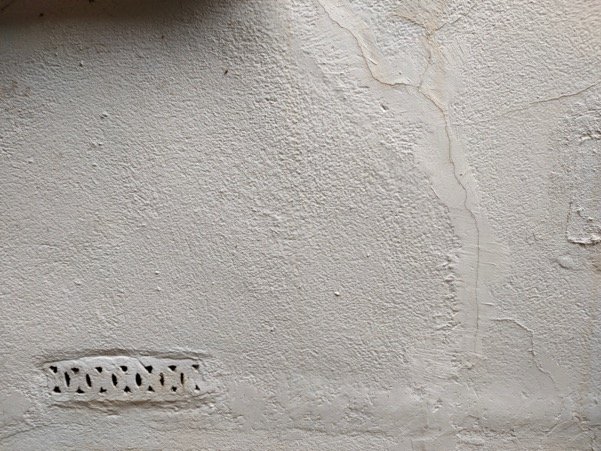 There are cracks in the render which have been filled in the past but cracks have returned.

Render cracks can cause ingress. Horizontal cracks are worse than vertical cracks. It is difficult to completely seal a render cracks once it appears. External acrylic caulk and masonry paint works well for small cracks and a cement based mortar for larger cracks. 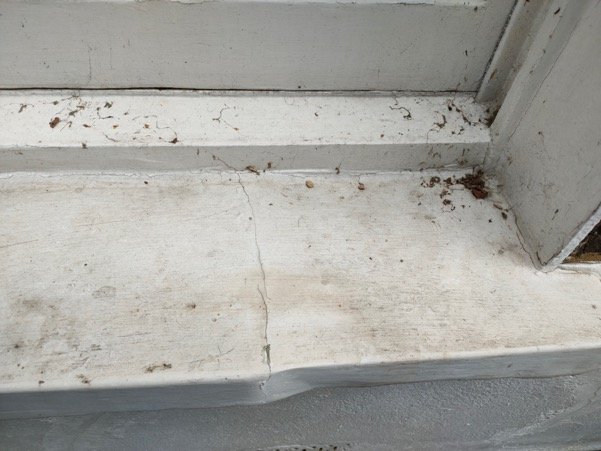 There is a crack in the windowsill outside the rear bay. It looks too small to cause ingress.

You should keep the crtack sealed with external acrylic caulk and masonry paint. 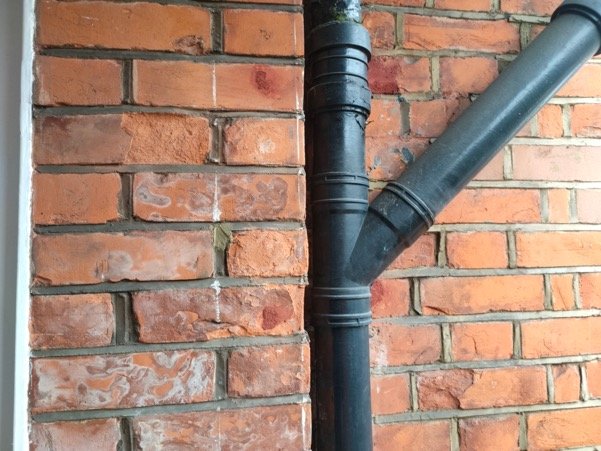 There is spalling of bricks to the front, a sign that rainwater goods have failed in the past.

The rainwater goods appear to be working well but you should check during a rainstorm.