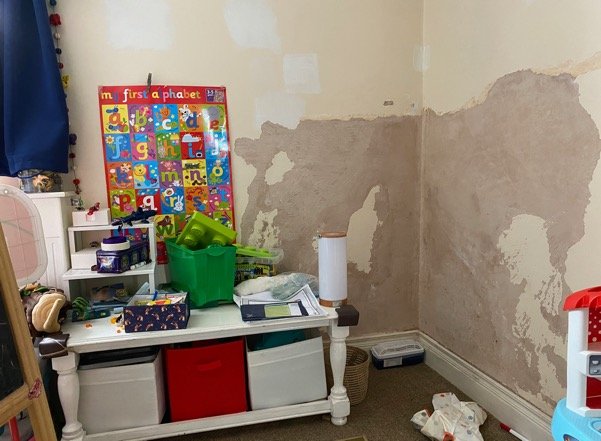 The property is suffering from condensation made worse by damp proofing treatment.

It is perhaps easiest to understand the dampness in the rear bedroom, where the line of damp proofers slurry can be seen about 1 – 1.3M off the ground in the lower section of wall in the corner. The interface between the old absorbent plaster and impermeable slurry causes absorption imbalance, where moisture becomes trapped behind the impermeable layer. Note also the mould at the base of the wall. 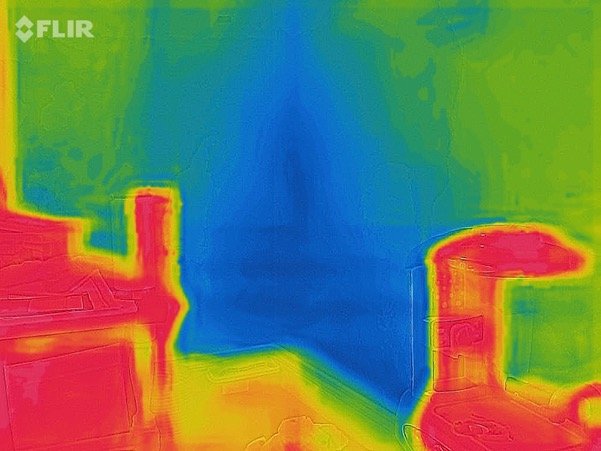 Looking through a thermal imaging lens where blue is cold, low in the corner is colder than elsewhere. 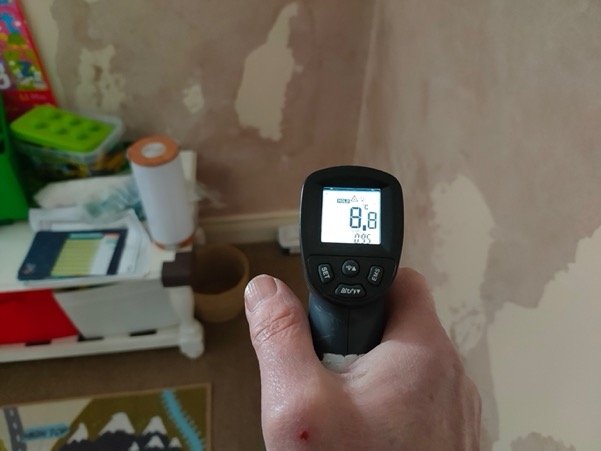 The wall temperature was about 4°C colder than the front room, increasing humidity from 61%RH to 80%RH. 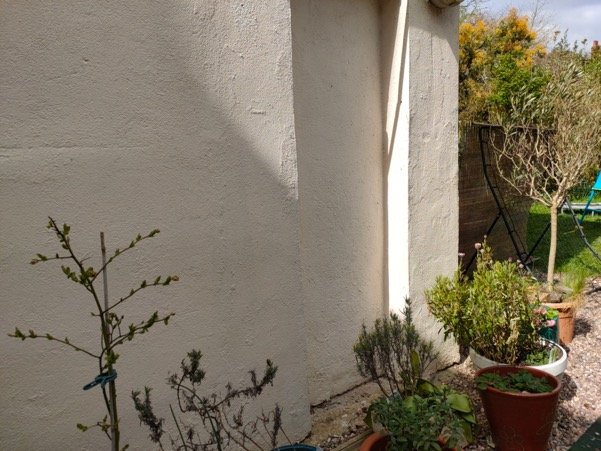 Looking outside we can see that a door has been filled in, creating a thermal bridge or zone of heat loss.

Every property has an area of heat loss, making that area more vulnerable to condensation and mould. Insulation helps. However, most issues result from insufficient ventilation. 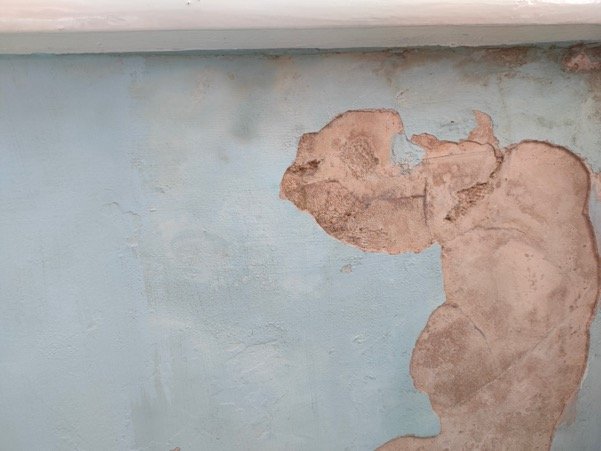 There is damage to the front wall, with signs of surface salts and mould.

The surface salts are made of calcium sulphate. Calcium sulphate is a key ingredient in cement and other building materials. If diluted in water salts tend to move to the surface. These can be removed with sandpaper and decorated. 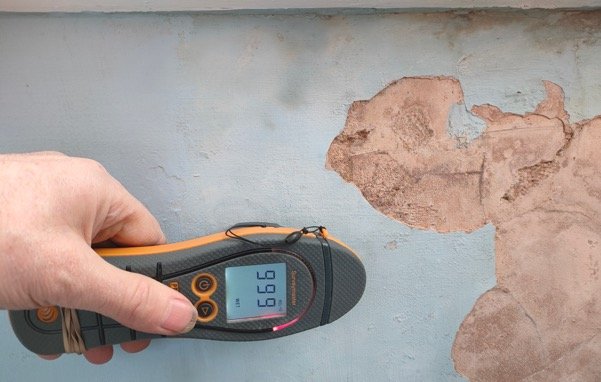 Using a Protimeter in radio frequency mode I was able to detect damp deep within the wall.

I also tested walls in radio frequency mode. Water reflects radio waves at a set frequency similar to mobile phone shields. Meters can’t differentiate moisture from other dense matter such as metal and concrete. They help trace damp in a normal, homogeneous wall.

Readings below 300 REL indicate that a wall is dry below the surface. These meters are for rapid scanning, mapping and profiling, see https://surveyor.tips/profiling. 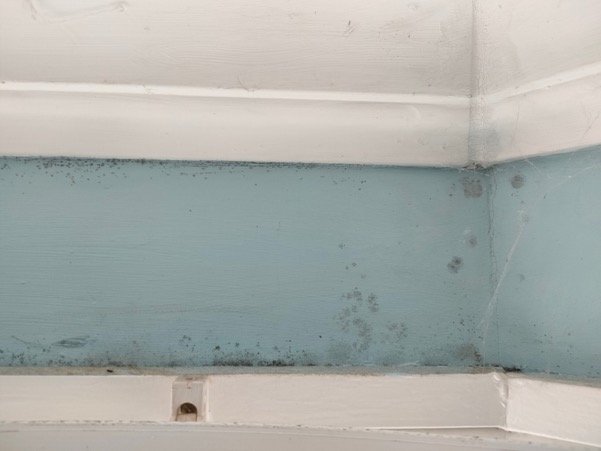 In the front bedroom there is mould growing above the bay window.

The front bedroom is near to the bathroom. I understand that condensation is often seen on the windows in the morning. 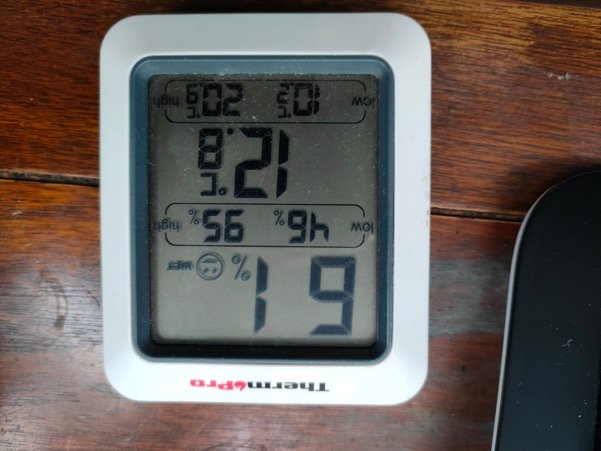 You have a humidity meter. Note the high humidity of 95% and low temperature of 10.2°C.

It can be difficult to get a thermostat into the coldest corners or close to a wall. Using a laser thermometer you will be able to measure the temperature difference between the meter and coldest part of wall. 1°C represents an increase in relative humidity of about 5%RH. 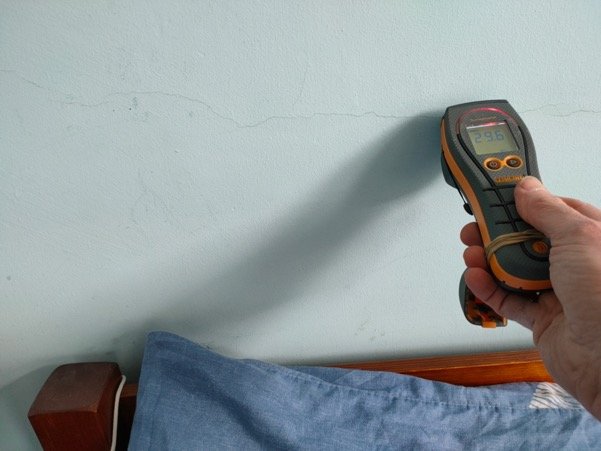 The wall was damp on the surface in a horizontal band to ~100mm above the crack, i.e. top of the slurry.

I used a standard damp meter, called a conductance or capacitance meter, for measuring the surface. These meters measures electrical conductance of salts in water, a proxy for dampness. Readings below 20WME are considered dry. The range is 8WME to 99WME. See https://surveyor.tips/dampmeter. 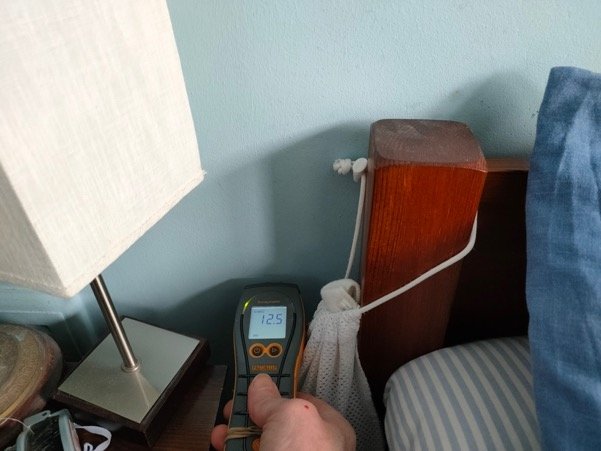 The slurry is hiding the damp, the surface here is dry.

I filmed the change in damp meter readings. There is a band of damp along the top of the damp proofers slurry. 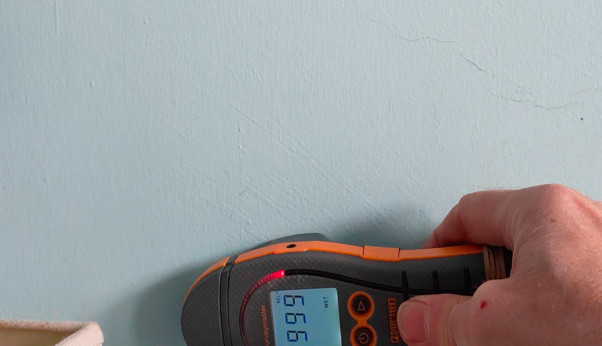 The band of damp is about 100mm from the top of the damp proofers line of slurry. 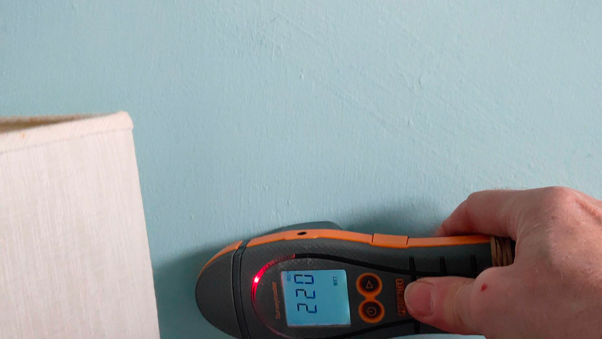 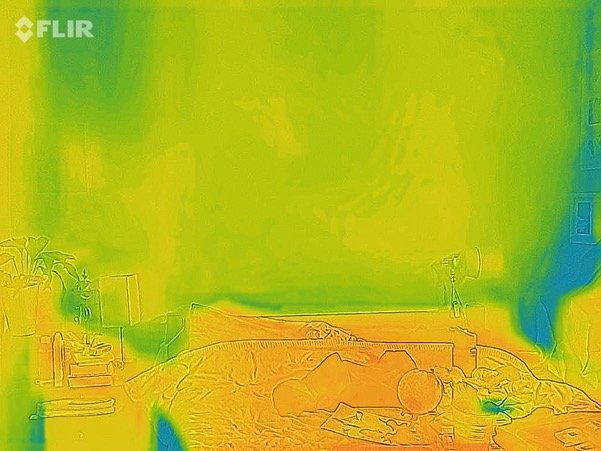 Looking at a thermal image of the wall, we see no major thermal bridges or areas of heat loss. 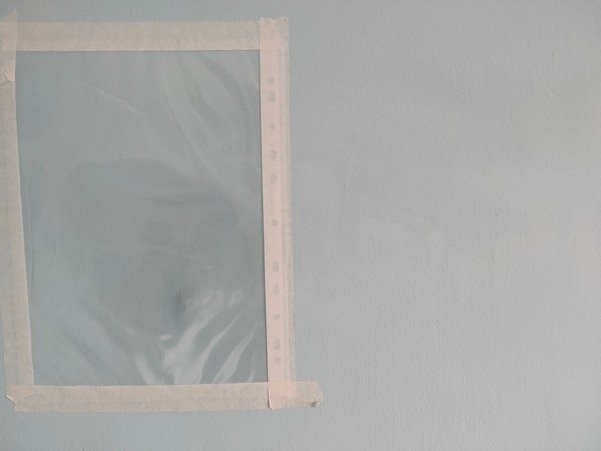 You sectioned off a damp spot on the wall. This remained damp despite not being unduly influenced by vapour.

This area of dampness is caused by hygroscopic salts, probably calcium nitrate released from when the chimney breast was removed. Hygroscopic means water loving. It causes vapour to condense. The critical relative humidity of calcium nitrate is 46.7%RH at 30 ̊C, calcium sulphate is not hygroscopic, but common salt, sodium chloride is @ 75%RH.

The bathroom ventilation was not working well, running at 4.5 l/s with a 5 minute overrun. 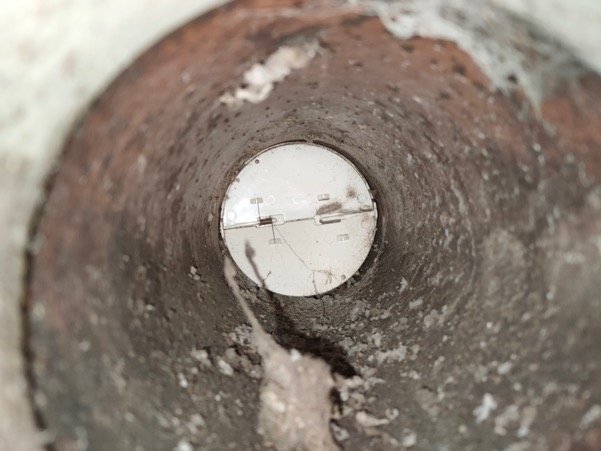 The vent has a backflow draught shutter which was incorrectly installed (horizontal, it should be vertical). 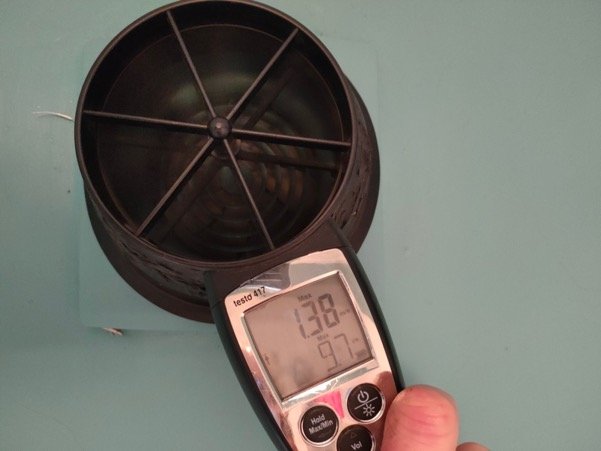 I removed the back flow shutter which doubled the speed to 9.7 l/s

I recommend replacing the fan with a continuous flow, such as the Ela Mori (which I use in my own property). It provides very background ventilation of about 5 l/s and a boost function when humidity increases or a bathroom light is switched on. 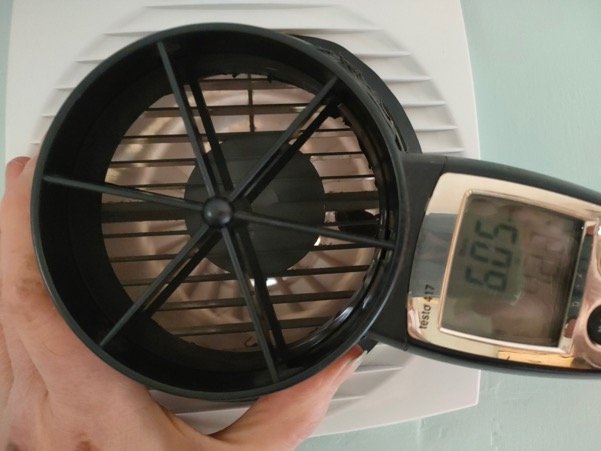 The kitchen extraction fan runs ~ 2/3rd of building regulation requirements, which should be OK if used.

I encourage homeowners with property showing signs of damp or mould to monitor the relative humidity. The data can be used to improve ventilation, increase heat balance, insulation and improve airflow through reduced clutter to see the benefits. 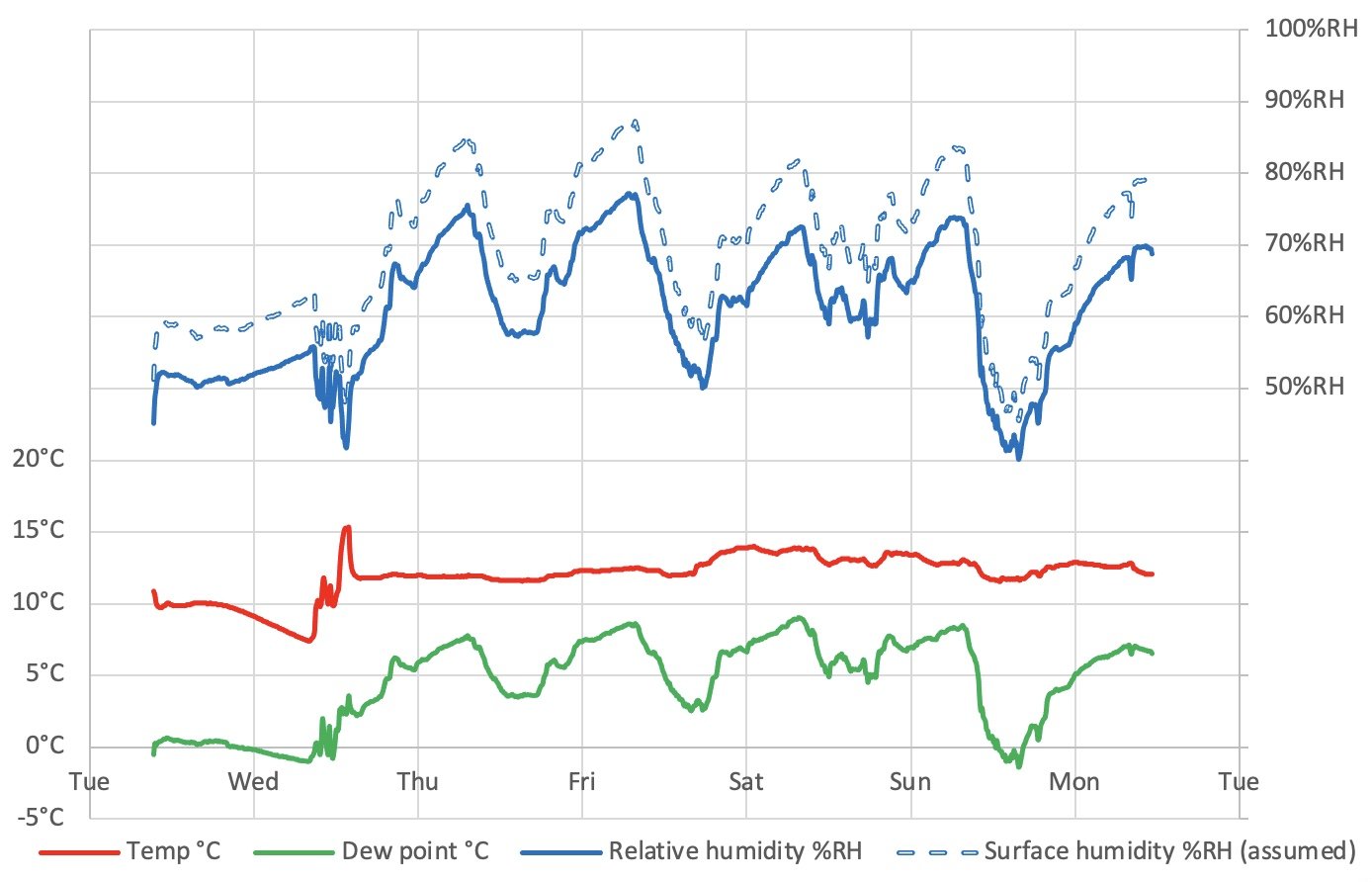 Looking at your data, there is constant heat, but steady increase humidity overnight. This suggests insufficient background ventilation. The simplest solution is to use a continuous flow extractor fan. Consider also using a PIV if you need filtered air, see surveyor.tips/piv.