The dots are from past damp proofing treatment, which typically requires replacement of the original absorbent plaster with impermeable plaster, known as slurry. This increases condensation risk. 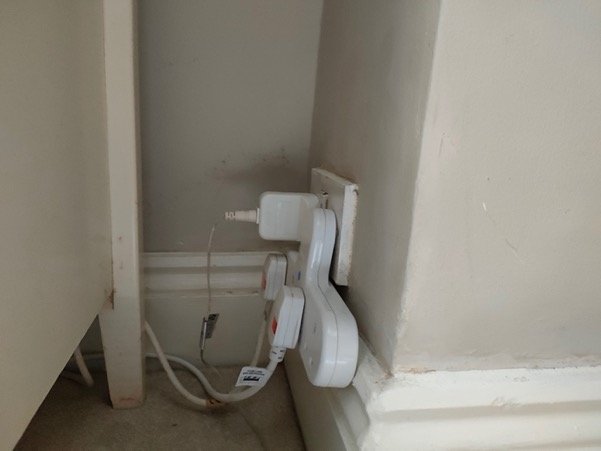 The first two damp concern were in the bedroom.

There is a damp patch on the left-hand side of the chimney breast. 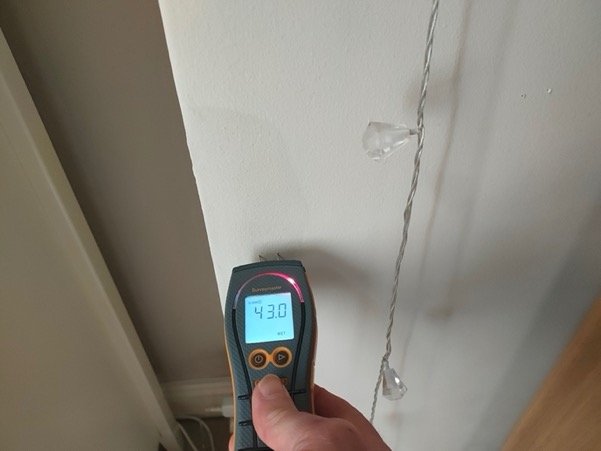 This damp patch is discreet with a colourless wet look. This profile of damp is consistent with hygroscopic salts.

The damp meter shows high damp meter reading is within the damp patch, but low elsewhere, again this is consistent with hygroscopic salts, see surveyor.tips/hygroscopic. 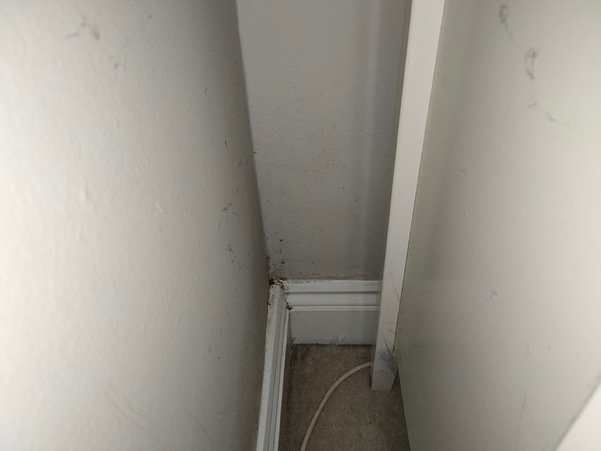 There was damp and mould in the rear corner, this of damp results from insufficient ventilation. 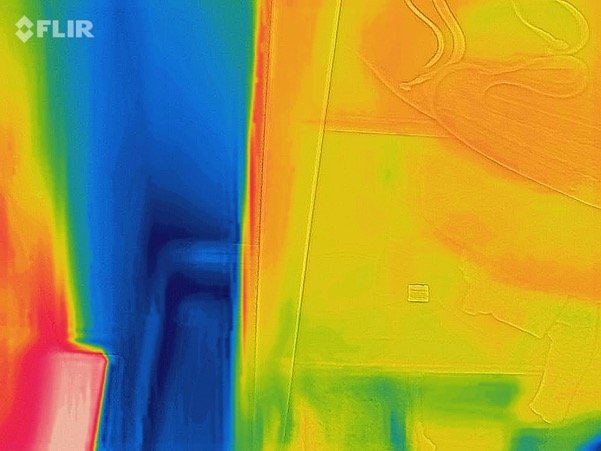 Poor airflow behind the cupboard results in a low temperature, here blue is about 5°C colder than orange. 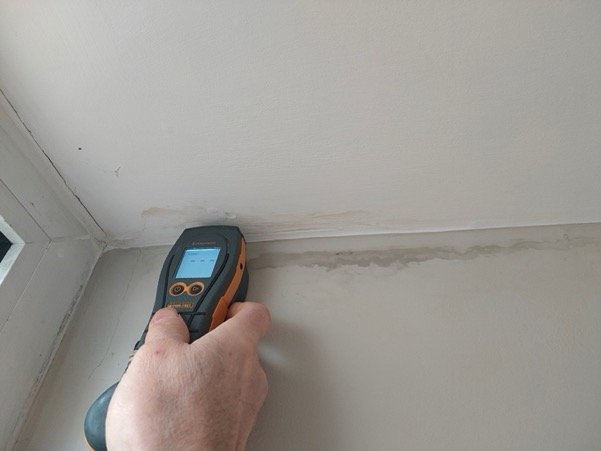 There was a damp stain between the kitchen and bathroom.

Brown stains like this result from water passing through building material. At the time of the survey the ceiling was dry. 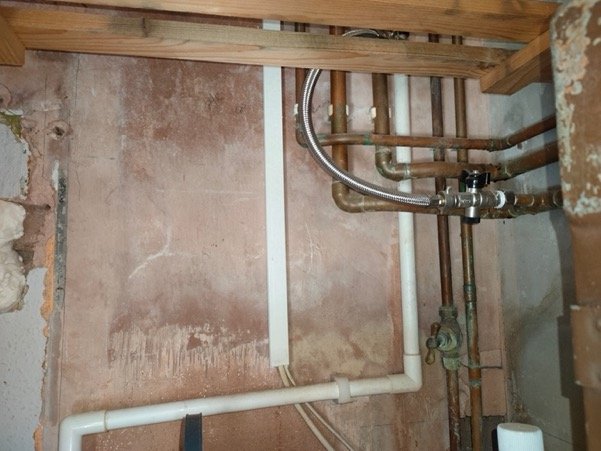 Looking in the rented flat in the area immediately upstairs, we see the boiler and overflow pipe.

It looks like a valve has been changed recently, suggesting repair. However, you should confirm this with the owner. It is possible that the overflow pipe has a leak in it. 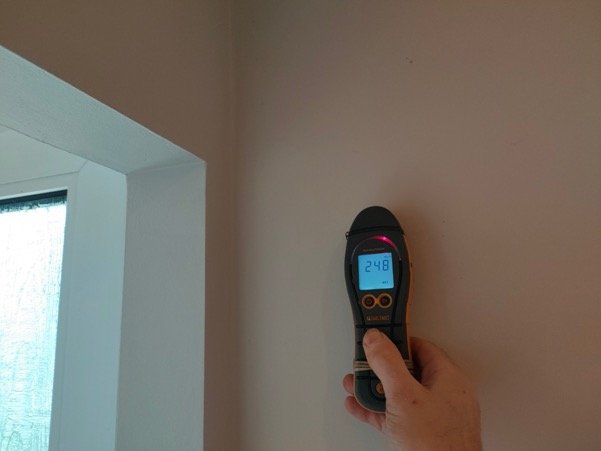 Another area of damp was reported in the kitchen. There was no visible dampness at the time of the survey.

The radio frequency meter tests for potential dampness deep within a wall, below 300REL is considered dry. The meter reading is low, i.e. dry. 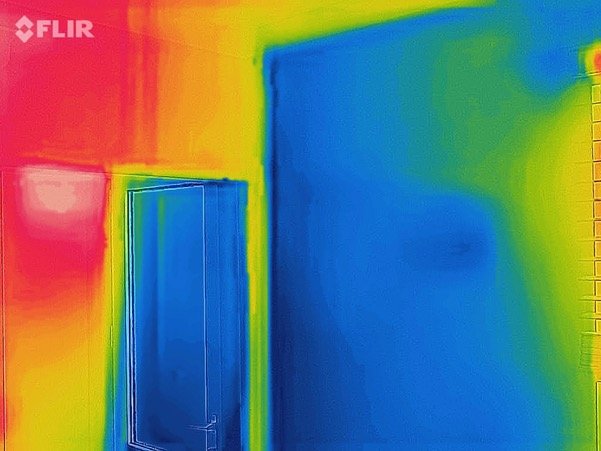 Looking at the thermal image we see an area of heat loss that doesn’t quite line up with the reported damp spot. 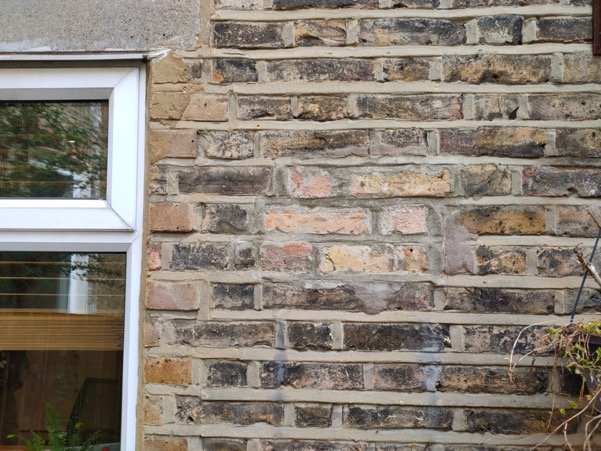 Looking outside we see an old event that has been blocked up, which lines up with the thermal image.

The new bricks are creating a slight thermal bridge increasing the risk of condensation. To the right there is a plant pot and at one stage that was the metal light fitting both of these could be the source of moisture however given there is no ongoing dampness you should simply monitor this patch. 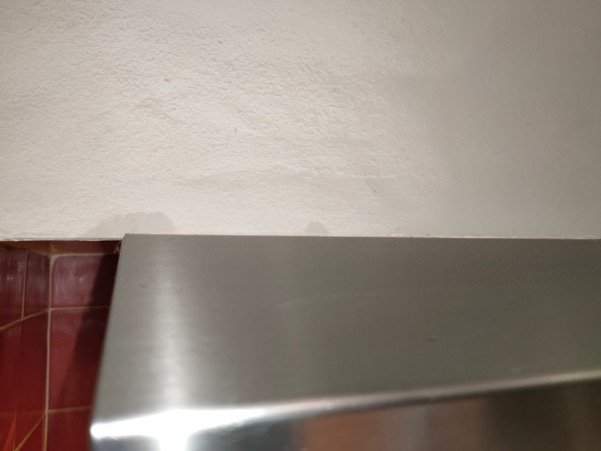 These apparent patches are grease stains. Note the hood recycles air rather than extracts it. 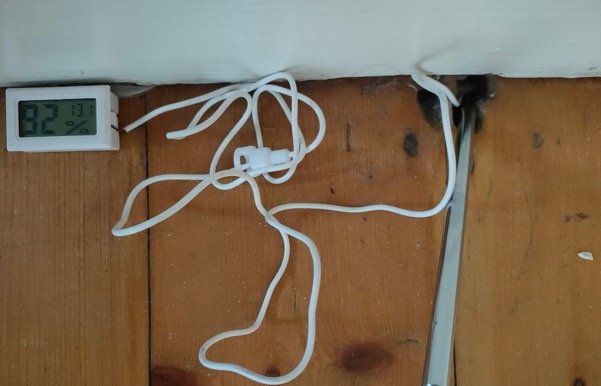 I measured high relative humidity in the subfloor .

high relative humidity in the subfloor suggest either high groundwater levels, the source of water causing rising damp, a leak from the mains water or waste water or a drainage leak from the rain water system. I tested the mains pressure, there was no apparent leak there. 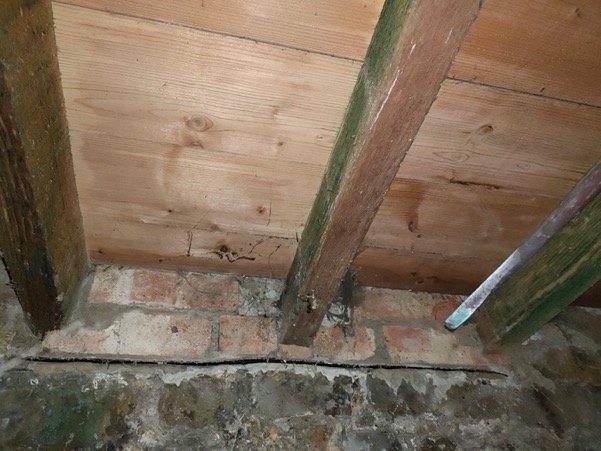 Timber in the subfloor has been replaced. The green tinge is from tantalisation, using a fungicide.

This tells me that there have been problems in the subfloor in the past. Often contractors don’t fix the root cause, which may be the rainwater goods. Note some of the air bricks have been bricked up. Ideally ventilation should be promoted in the subfloor, especially if it is wet. 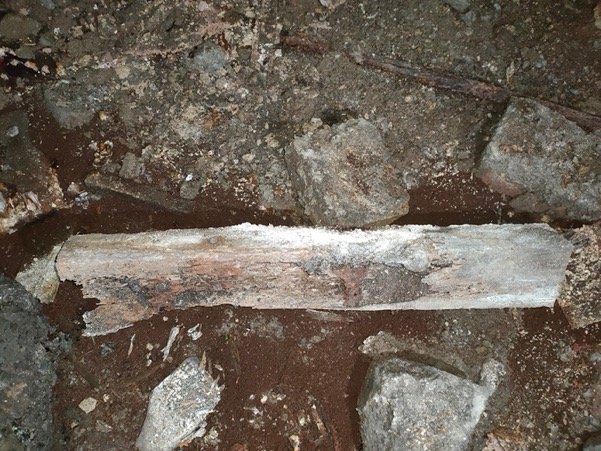 There is discarded timber in the subfloor. The timber is rotten with woodworm.

The rot is Coniophora puteana, or cellar rot, a brown wet fungus, and wood weevil, see surveyor.tips/rot. Rot requires water to grow. Wood weevil requires rot. Remove the water and both will stop destroying timber. There is no evidence of rot to the remaining timber. However, it would be wise to remove this discarded timber. 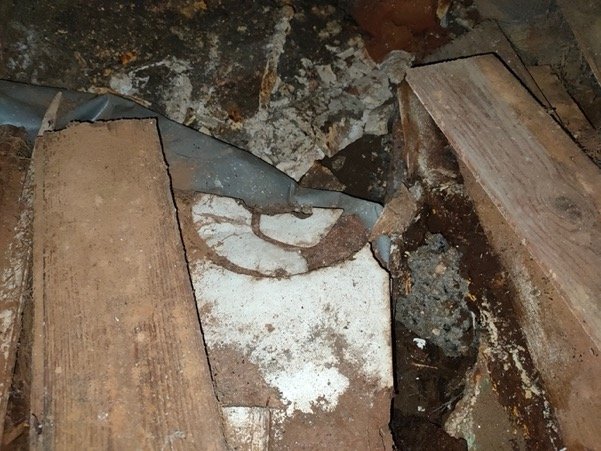 There was an area of timber that was particularly damp. It looked like timber from old kitchen units.

There is evidence of vapour condensating on cold-water pipes. 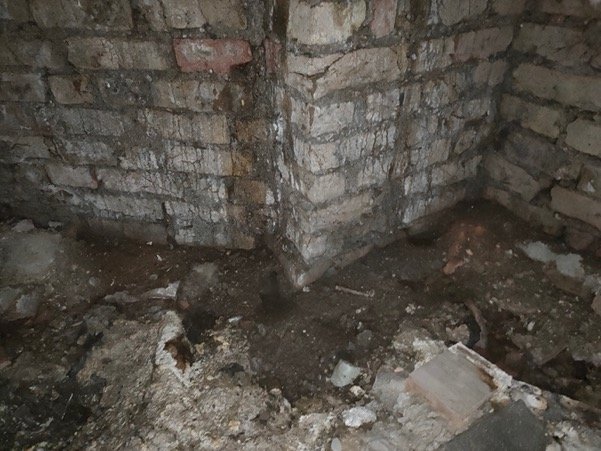 There is dampness coming through the wall underneath your front left-hand rainwater drain.

This suggest that the drain is damage under the soil. You could simply attach a horizontal pipe to drain water safely away from the house, but it is liable to be knocked. I recommend having a CCTV drain inspection and repair if required. 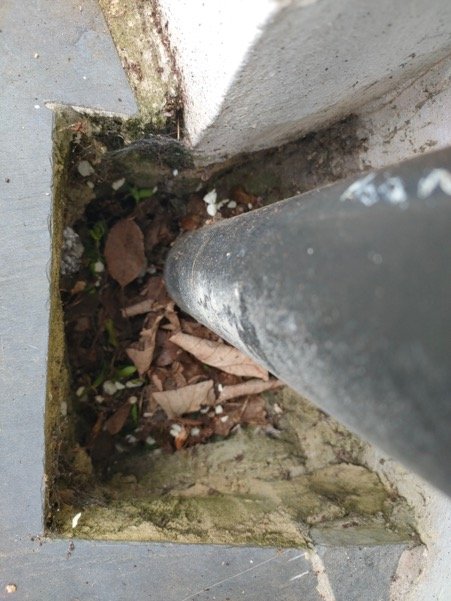 I tested the drain externally. It appeared to be draining effectively, but I suspect a crack in the pipework. 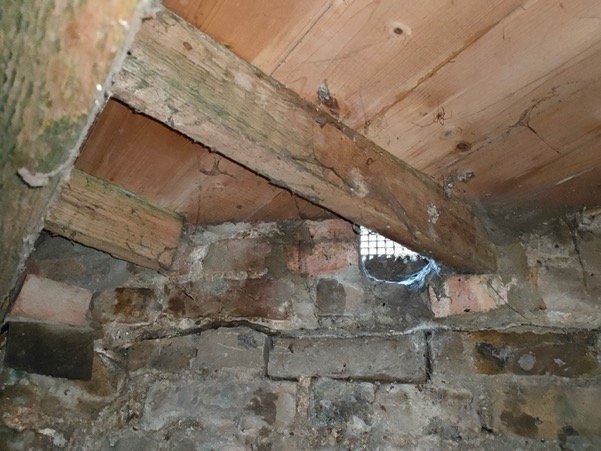 This is looking to the front right-hand bay from within the subfloor.

Note the visible damp proof course under the airbrick, which looks reasonably free. Also note the height of the sub-floor, about 1.4M, higher than water will rise. However, some of the subfloor airbricks had been removed and the decking to the rear is blocking airflow. The result is evaporation from the water under the rainwater drain may be condensing on damp-proof course. This can cause a rising-damp like profile in the flat. 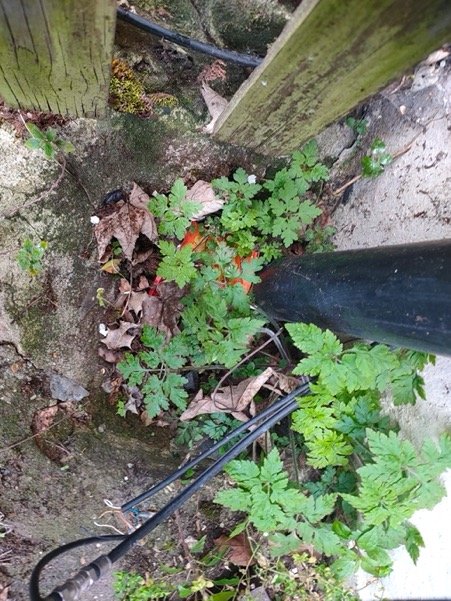 The neighbours drain was partially blocked. Again it was slightly damp underneath it, but not as visible. 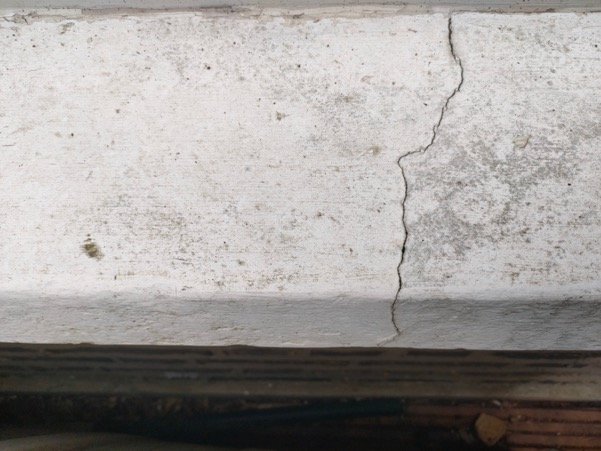 As a general comment, you should rake out and fill all cracks such as here to the windowsill.