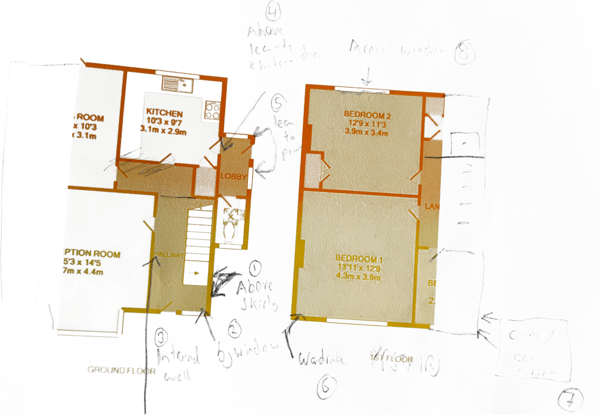 You had 8 different damp issues you wanted me to look at and identify the root cause for. 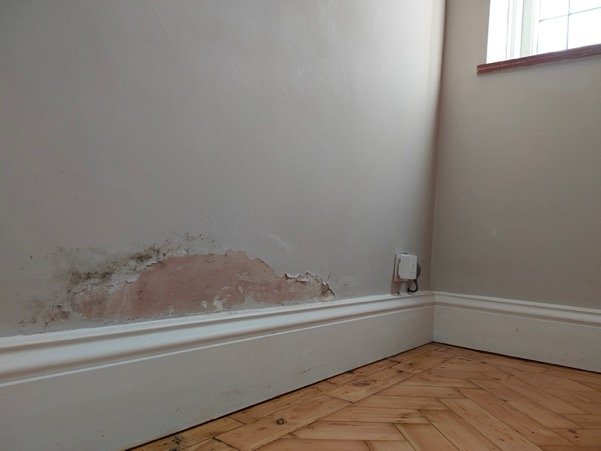 1) Damp and mould by the front door, behind the shoe rack.

Wherever there is mould, there is a ventilation issue. Mould grows where relative humidity exceeds 85%RH for 6+ hours. Excessive humidity results from insufficient ventilation, poor air circulation and a cold surface. See surveyor.tips/mould. 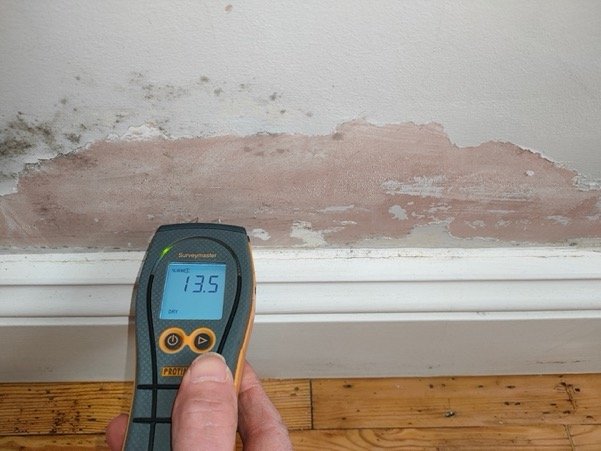 The wall was dry on the surface during the survey, although white salts suggest that it has been damp. 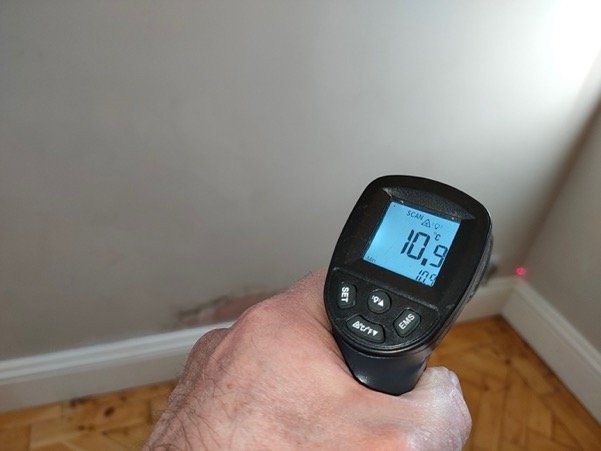 The wall by the front is cold. 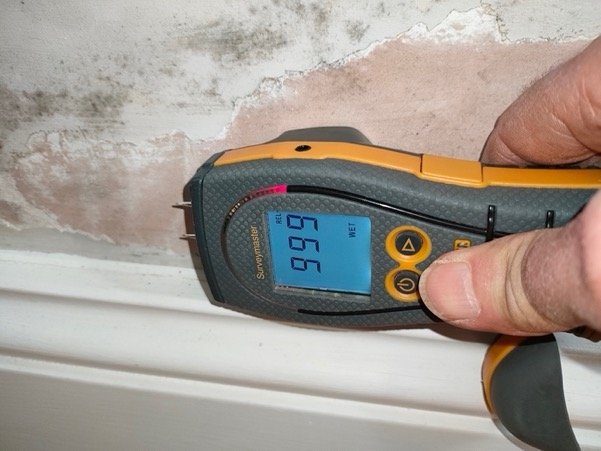 Using a radio frequency meter, I was able to detect moisture deep inside the wall in the centre of the patch. 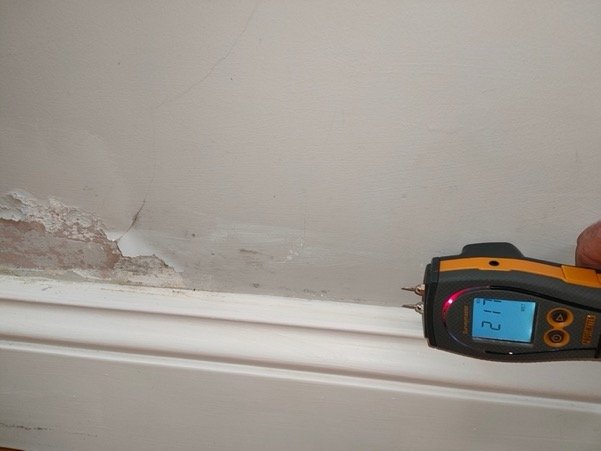 However, a short distance away the wall is dry, which it would not be if there was rising damp.

The house is on a hill, therefore groundwater, the source of water in rising damp will tend to be drawn away from the property making rising damp virtually impossible. 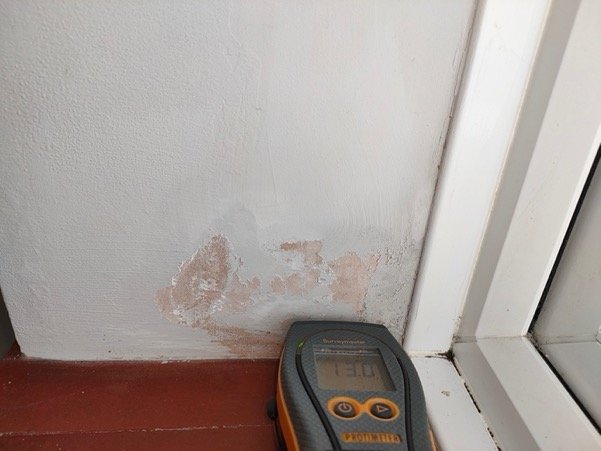 2) There was dampness in the corner of the wall by the window, an area called a window “reveal”.

Reveals are prone to condensation as there is very little insulation. 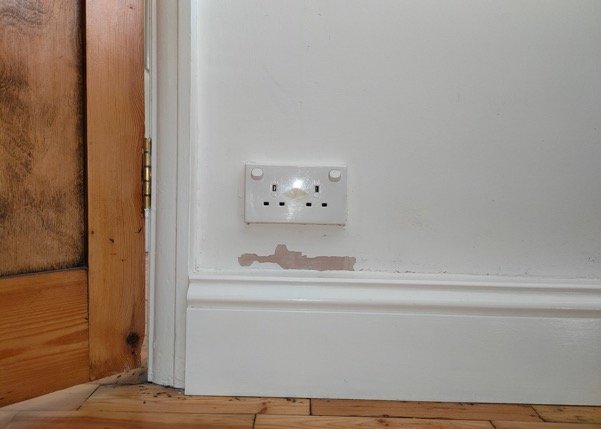 3) There is dampness deep behind an electrical socket to the front reception above a solid floor.

This is perhaps more complicated to explain. It could be a leak from the radiator. However, there is no discolouration which it typically would have from a radiator leak.

This damp patch could be caused by the electrician wire being run through the floor, losing heat. Two alternatives; 1) follow recommendation for dropping humidity and test the wall for damp, 2) have the heating system pressure tested for a leak and repair accordingly. 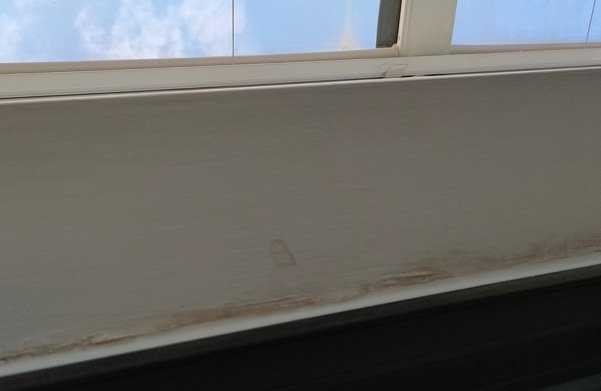 4) There is damp on the wall either side of the conservatory.

The damp is accompanied by a slightly brown damp stain. This is a sign of water passing through building material, either a leak or rainwater, but in this case rainwater. 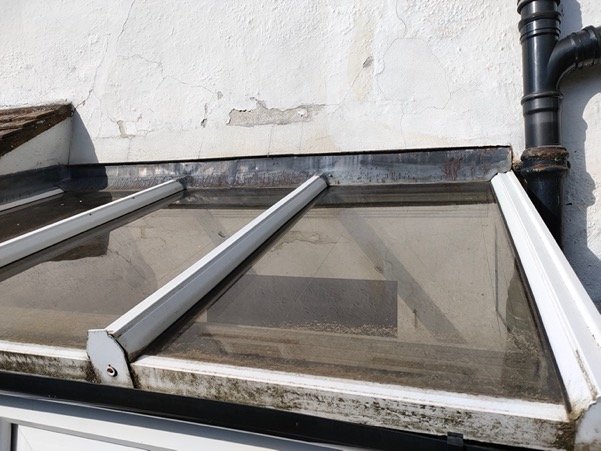 Looking outside we can see render cracks that need filling and the wall generally needs repainting.

Water becomes drawn in through cracks in render. Impermeable render stops water from evaporating out, so it continues inside where moisture can evaporate. 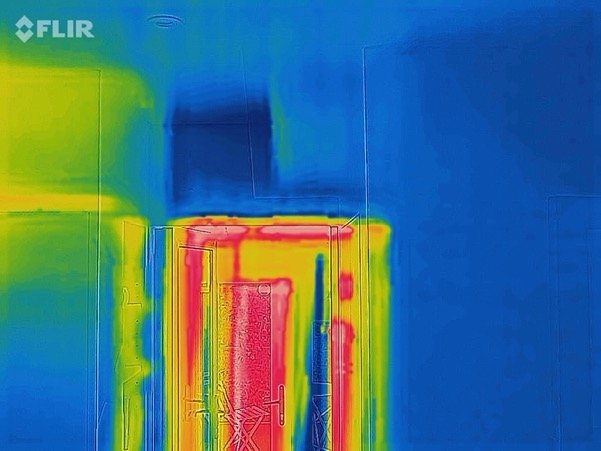 Looking through a thermal lens where blue is ~5˚C colder than yellow, we see heat loss.

The effects of penetrating damp can be increased by heat loss and condensation. 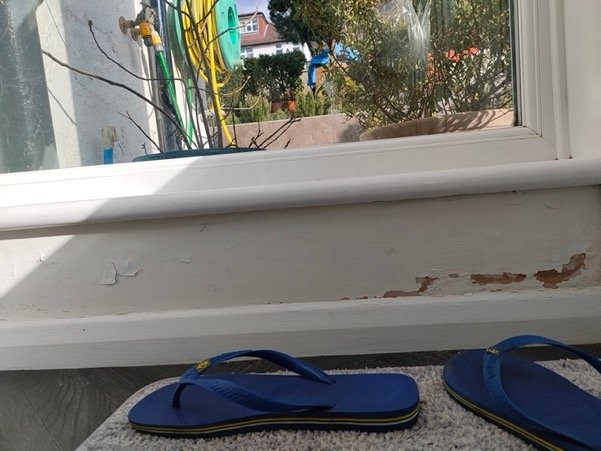 5) Damp in the lean-to. These unheated, unvented attachments are always vulnerable to condensation. 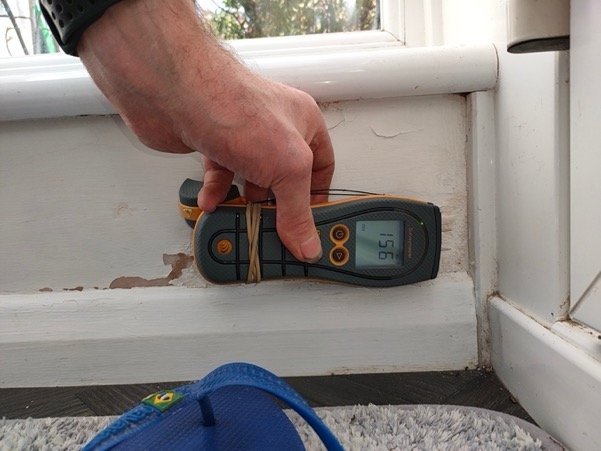 The walls were dry at the time of the survey. 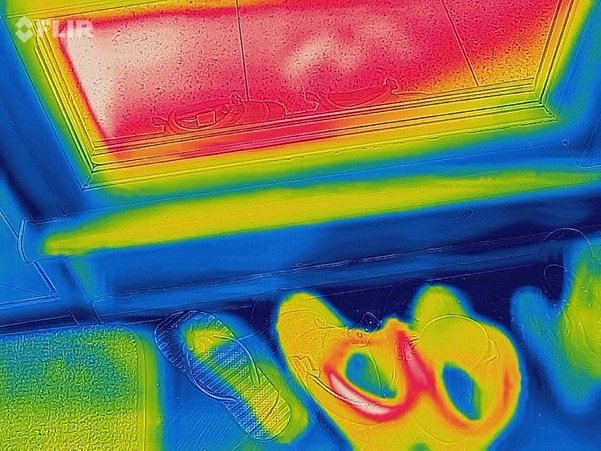 But they will always be vulnerable.

Consider heating, installing insulation or ventilation, using a dehumidifier or anti-condensation paint, they will all help. 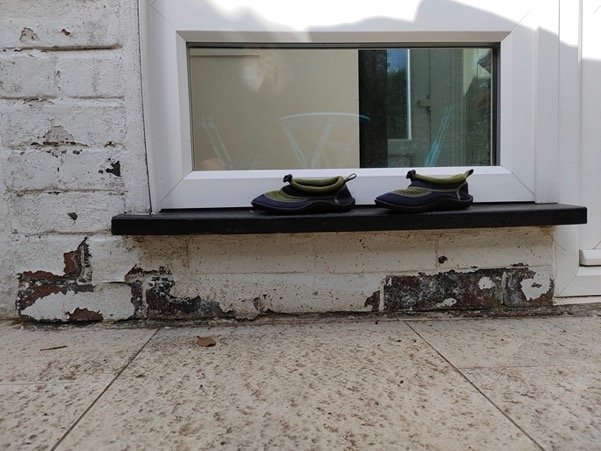 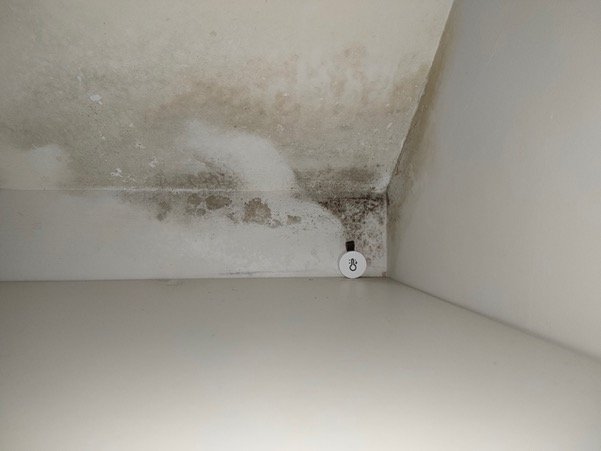 6) Mould results from the cold cupboard trapping humidity from the bathroom.

Relative humidity is a measure of how much vapour is in the air compared to air’s capacity to hold vapour. It is a function of vapour pressure (quality of vapour) and temperature. You should be able to bring the humidity down, see recommendations, consider adding insulation to the wall. Any form of insulation works, however, it is better if it is either air permeable, absorbent, or sealed so that not air can get in between the insulation and wall. 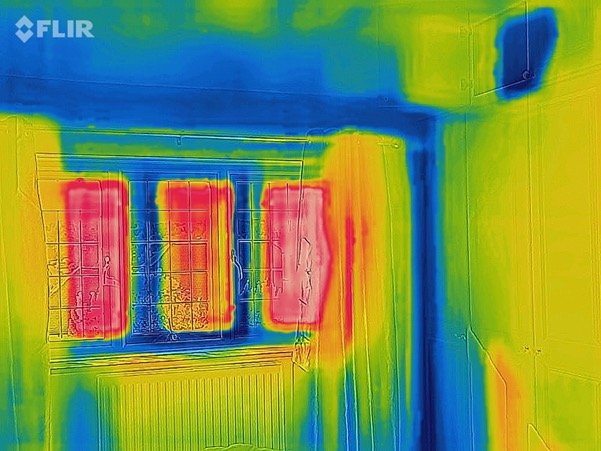 As temperature rises, air can hold more vapour. Conversely as temperature drops, air holds less vapour until it meets the dew point at 100%RH, when dew or condensation forms. 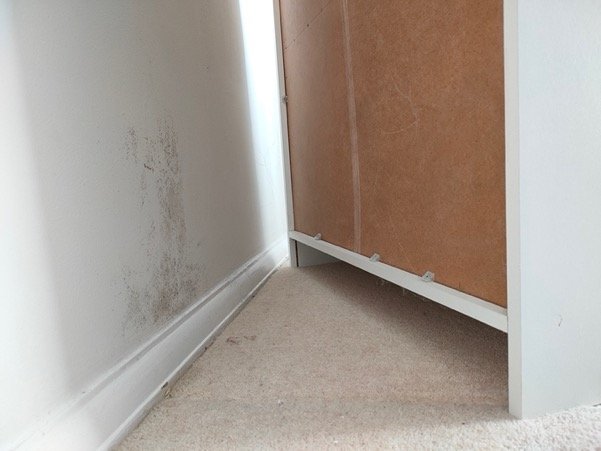 7) The effect is the same behind the wardrobe, where warm humid air is becoming trapped. 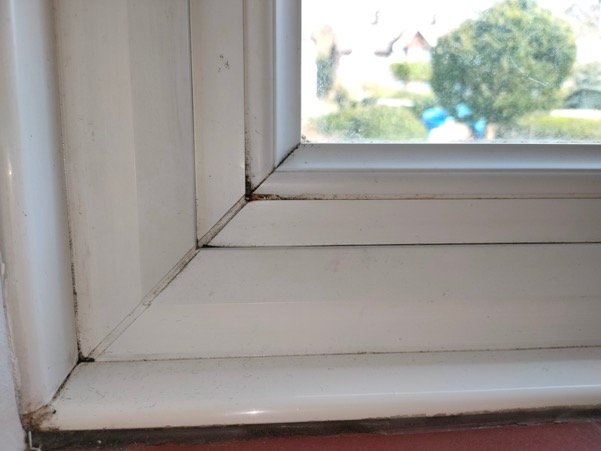 8) Mould is growing around the window; relative humidity is highest around areas of heat loss. 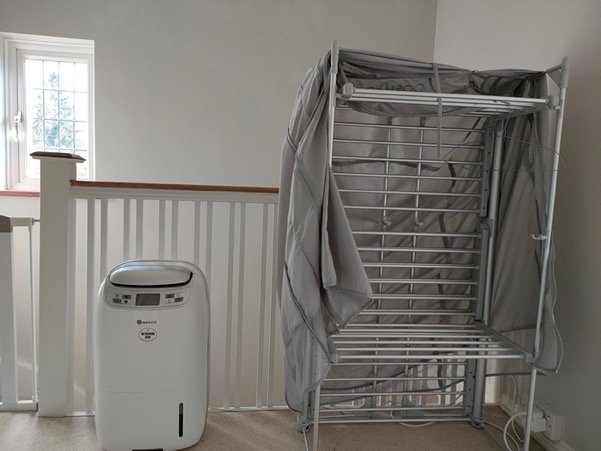 The root cause of most of your damp is probably the electrical dryer and possibly the bathroom.

Consider using an externally vented dryer, which I recall you already have. 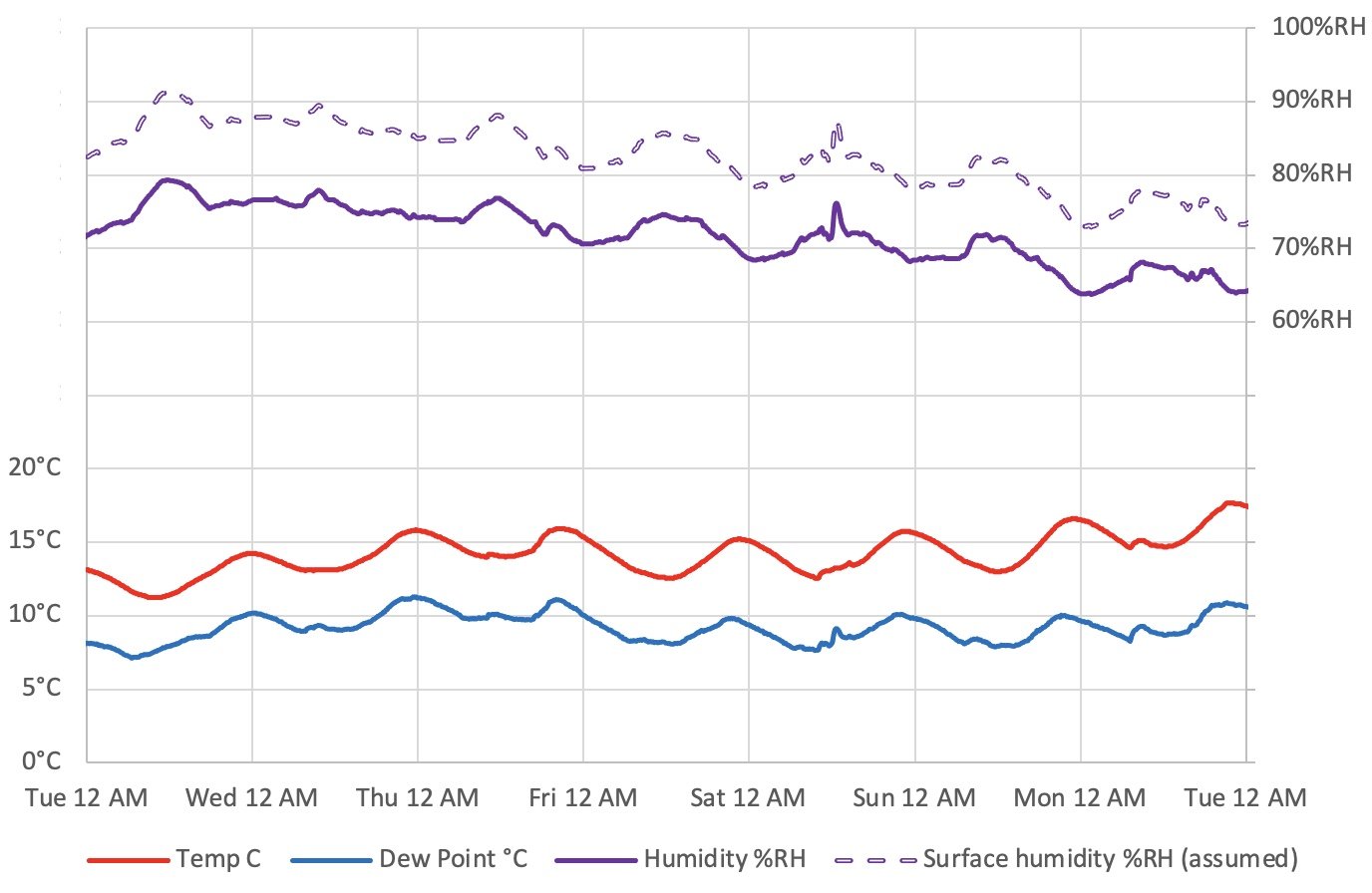 The interesting thing with your data is how consistently the dew point follows temperature, more than relative humidity. Dew point is a proxy for vapour quantity. It increases with vapour production and evaporation and decreases with ventilation and condensation.

It suggests that vapour being absorbed into walls and released, a form of buffering. The trend to reduce humidity overall, you have reduced relative humidity from an average of 88%RH to 75%RH, the clearest change in an increase in temperature not a reduction in vapour (i.e. dew point reduction). Assumed surface RH is based on the wall temperature.