This modern apartment has a PIV unit yet condensation is forming and mould is growing across many surfaces.

Excess humidity and insufficient heat (when the heater stopped working). 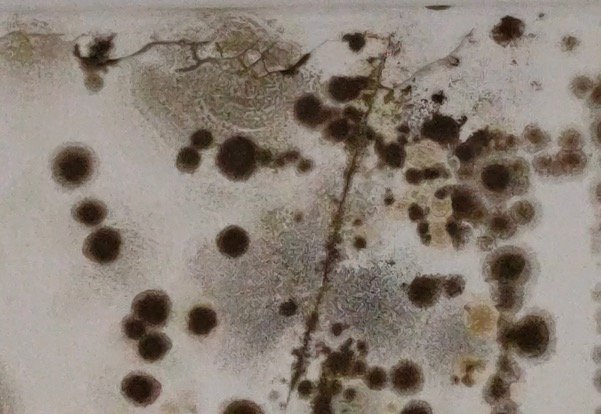 This is one of the worst cases of mould and condensation that I have seen for a long time.

Mould grows where relative humidity exceeds 85%RH for 6+ hours. Excess humidity results from insufficient ventilation. A secondary cause is poor air circulation and a cold surface.

The tenant tells me the mould formed in a week, just after the heating stopped in February. 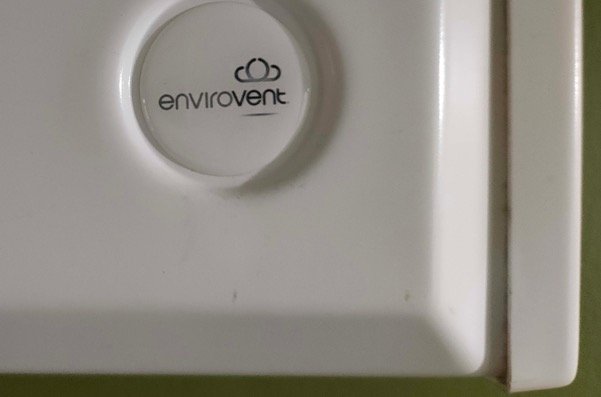 A lot of money has been spent on installing a PIV and continuous flow ventilation, yet problems persist, why?

As far as I can see, the Positive Input Ventilation (“PIV”) unit has been installed in line with Environment, the supplier’s guidelines (“ATMOS® for Flats & Apartments”) and building regulations. It deviates from the property care association guidelines by installing the inflow next to the outflow. In my opinion the problem is: 1) The PIV is leaking, probably because of pollution blocked filters, 2) the bedroom and reception trickle vents are closed, making a ventilation short circuit inevitable and 3) clothes are being dried in an unvented room.

As it is commonly the problem the PIV unit is short-circuiting internally. It is also short circuiting externally.

Rooms in this flat with closed trickle vents are either mouldy or damp from condensation. This is because air moves through currents, finding the fastest, least encumbered route out. PIV systems are designed so; “fresh filtered supply air simply dilutes, and displaces the existing air, improving indoor air quality and managing moisture levels within the home.” This clearly is not happening. 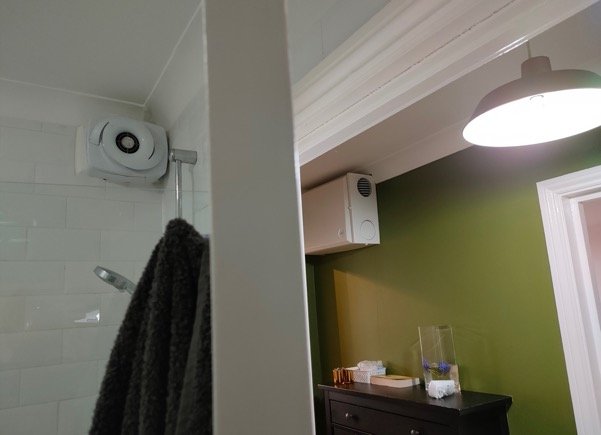 Here the PIV unit is just next to continuous flow fan for the bathroom creating a partial short circuit.

The PIV unit is set up with a 17 L/s inflow, which is suitable for three occupants. The bathroom has a continuous flow extractor fan that is running at about 5 L/s. So about a third of inflow from the PIV is going directly to the bathroom, the other 2/3 appears to be leaking through the side of the unit. 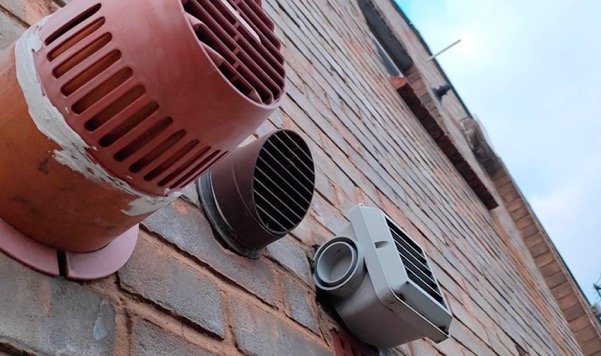 There is also a short circuit created externally where is the bathroom outflow its next to the PIV inflow.

There is no mention in Envirovent currently downloadable installation guide recommending a suitable distance between inflow and outflow. This is despite Envirovent contributing to the PCA guide that recommends at least 1M gap. I also note that there is a heat recovery unit into the mouldy room, that has been disconnected presumably because it wasn’t solving the problem before the PIV unit was installed.

I measured the inflow into the PIV unit. Only 7l/s is flowing in from outside, the remainder is leaking through the sides of the unit, you can feel the leak with your hand or paper. 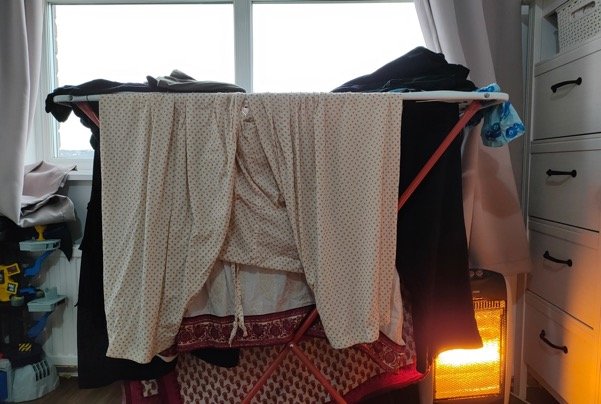 Understandably the occupiers are drying clothes in the reception, here using heat to speed up the process.

No mention is made in the building regulations, PCA guidance or Envirovents guides on how best to dry clothes. As best practice, landlords should provide some form of drying facilities. The downside of washer dryers is tenants rarely use them. In my opinion the safest solution where space is a premium, is to provide a drying rack in a bathroom with a continuously flowing fan and to monitor humidity levels. 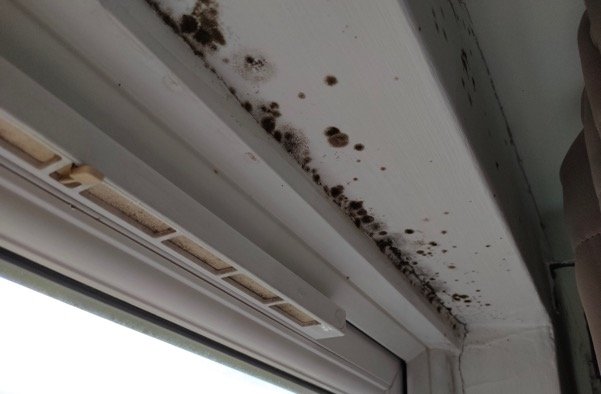 The key problem is lack of ventilation from the bedroom and reception. 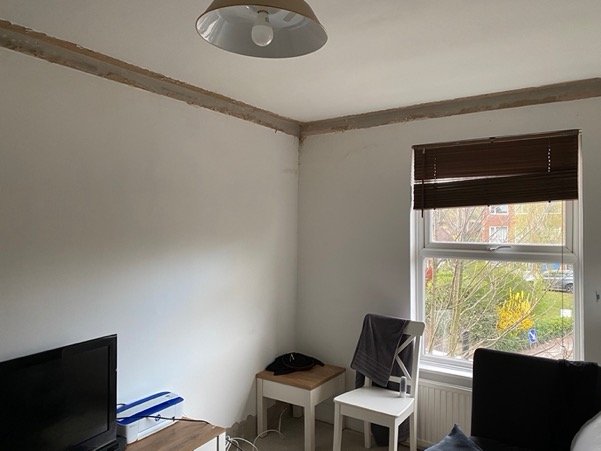 There are condensation marks along the top of the wall.

I understand from speaking to the tenant that the floor has had to be removed because of condensation damage. 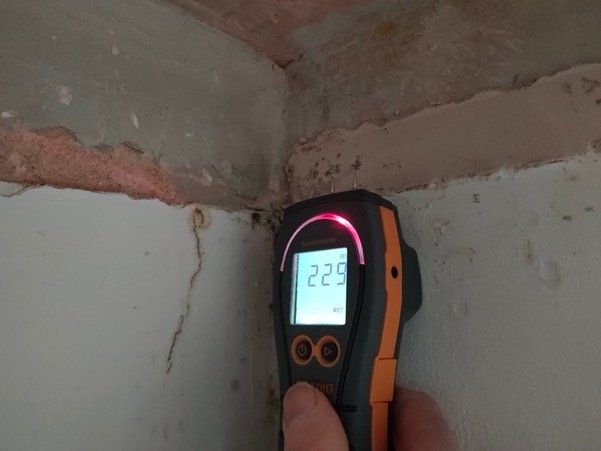 I measured with a damp meter, where below 300REL is considered dry.

The wall was dry at the time of the survey however there are signs of mould and condensation on the master bedroom wall. 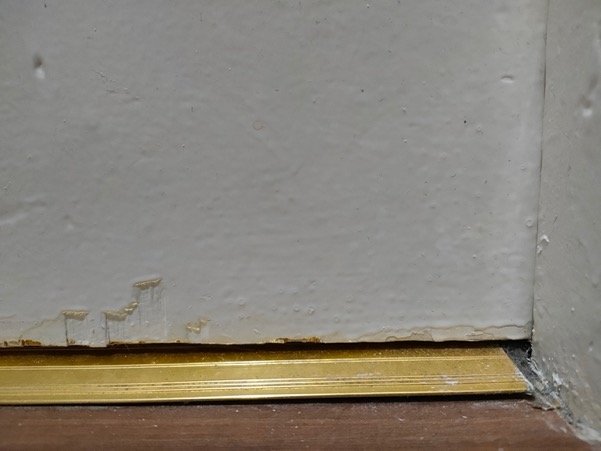 The undercut that is the gap under the door is about 3mm, less than building regulation requirements of 10mm.

There is a conflict between building regulation part F and fire regulations part L. However, from a firesafe perspective, smoke containment needs a gap of 3mm or less. 3mm should be sufficient for PIV units, although ideally the undercut should be equal across the property. 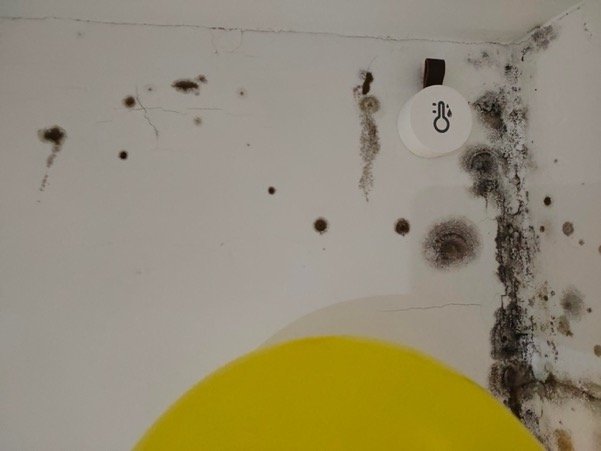 I left three dataloggers in the property and have data from external hygrometers for comparison. 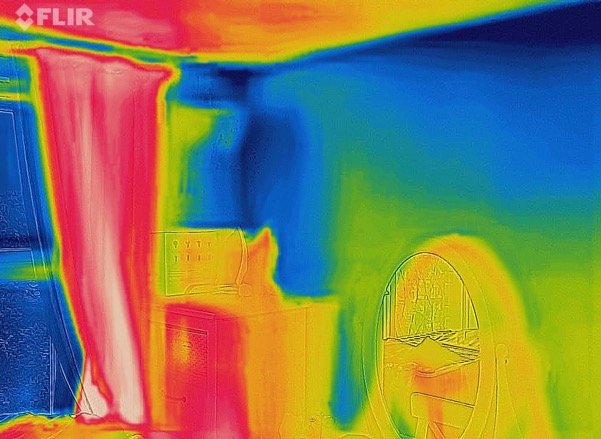 Thermal images show heat loss, where blue is about 5˚C colder than orange.

The mould and condensation is unusual in that it is a long a band along the wall about 600mm from the ceiling. 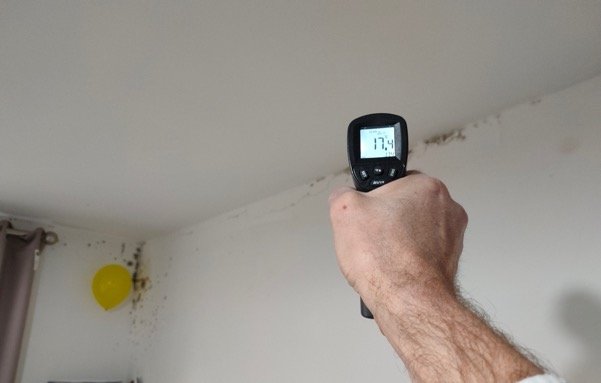 The temperature of the top of the room is 17.4°C, about 3°C below the ambient temperature.

Mould forms at 85%RH see mouldpoint.co.uk for a surface calculator and daily forecasts. 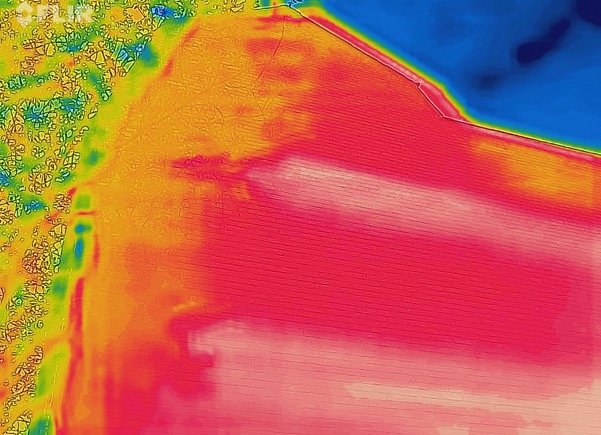 It is worth considering insulating the wall. However in my opinion the primary cause of mould in this property is insufficient ventilation in the Master bedroom and reception made worse by drying clothes in a non-vented room and possibly no night-time heating. 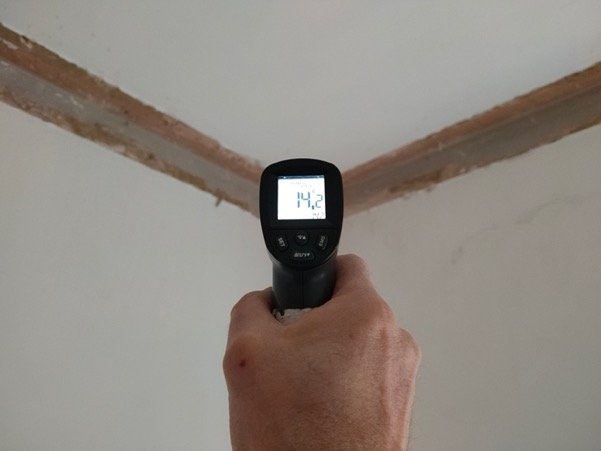 The coldest section of wall is where condensation formed in the master bedroom.

It is possible that the master bedroom is not being used at the moment while the condensation damaged floor is being replaced. 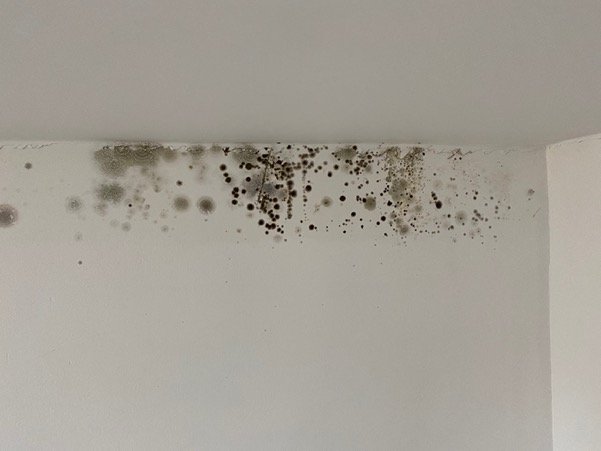 The banding of the mould illustrates the effect of temperature on relative humidity. 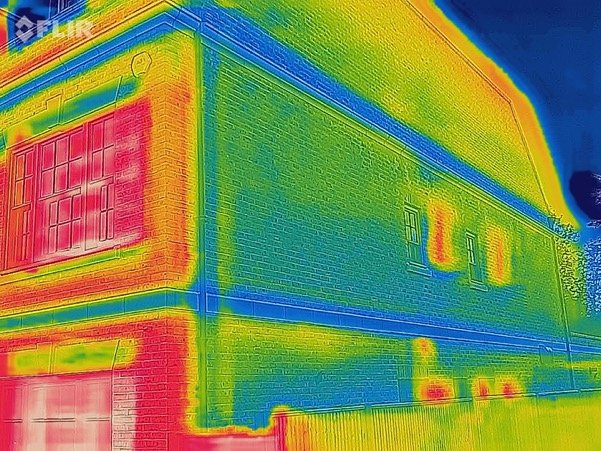 I took this thermal image of empty new build property to show you that this band of heat loss is not unusual. 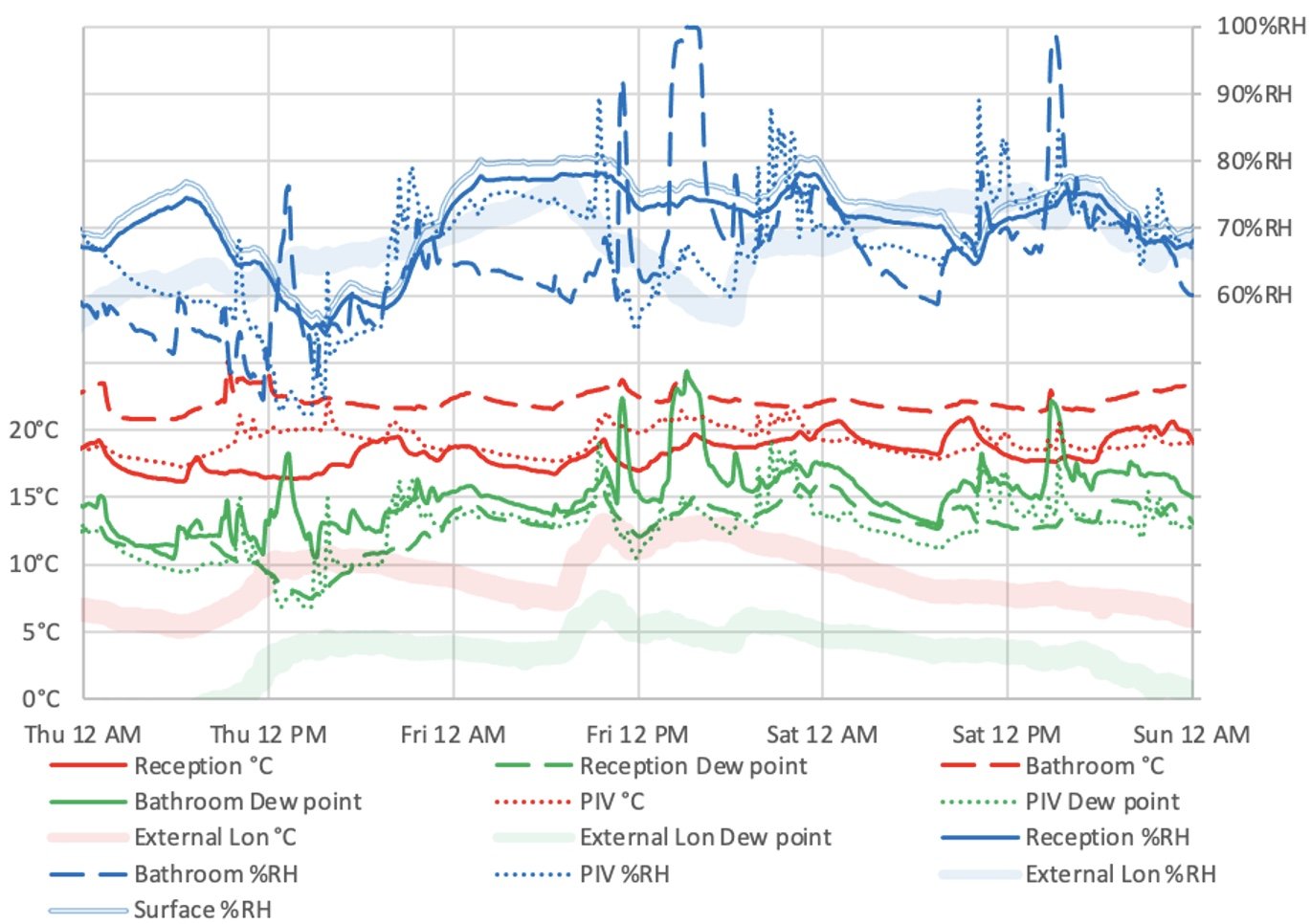 Data from your property

Relative humidity is a measure of how much vapour is in the air compared to air’s capacity to hold vapour. It is a function of vapour pressure (quality of vapour) and temperature. As temperature rises, air can hold more vapour. Conversely as temperature drops, air holds

Dew point is the temperature where condensation takes place. It is also a proxy the vapour pressure. Comparing the dew point of one area to another makes it possible to see where vapour is being generated or conversely removed (normally through ventilation).

In conclusion from the dataloggers

During the 4 days under observation the relative humidity in the reception was below 85%RH, often below 70%RH, considered too low for mould to grow. The data coming back from the PIV unit looks odd in that the temperature and relative humidity is similar to the internal conditions and very different to external atmospheric conditions. The dew point on the PIV unit should be very similar to the external Lon dew point (London).

I checked and found only about 1/3 of the air coming into the property is coming from the outside and this could be being recycled from the bathroom. I found air was leaking in through the sides.

I spoke to the chairman of the Property Care Association, who is a leading manufacturer of PIV units. In his opinion the most likely issue is the filter is blocked. Apparently, it is easy to open the unit and simple to use a vacuum cleaner to refresh the filter – check manufacturer details and or ask the installer to unblocked the filter and then check the incoming flow rate.

As a passing thought, I noticed a dehumidifier next to the front door.
Condensation and mould would not be as evident if the dehumidifier had been used in the bedroom and reception. Dehumidifiers should not be relied upon as they cannot remove airborne pollutants. However, dehumidifiers can compensate for drying clothes in unvented rooms.