This early twentieth century house appeared to have rising damp. However, evidence demonstrates that it was condensation, with some heat loss from penetrating damp.

The row of holes in these bricks shows that the property has been chemically damp proofed against rising damp. 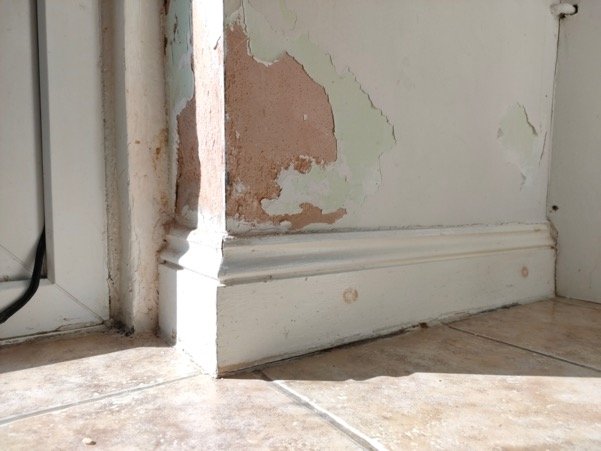 The primary concern is dampness at the base of the external kitchen wall.

There are three issues here, one is the unvented kitchen, the second is the cold external wall and the third is the impermeable solid floor which amplifies any dampness on the floor. 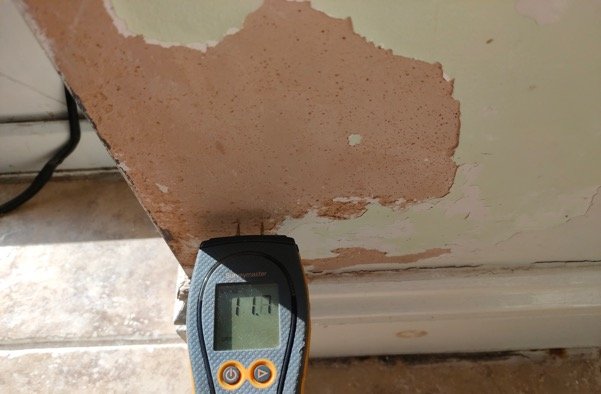 The wall was dry at the time of the survey. Note the plasterers metal beading, which causes heat loss.

I tested the surface of internal walls with a Protimeter damp meter in conductance mode. These meters measure electrical conductance of salts in water, a proxy for damp. Readings below 20WME are considered dry. The range is 8 to 99WME. See surveyor.tips/dampmeter. 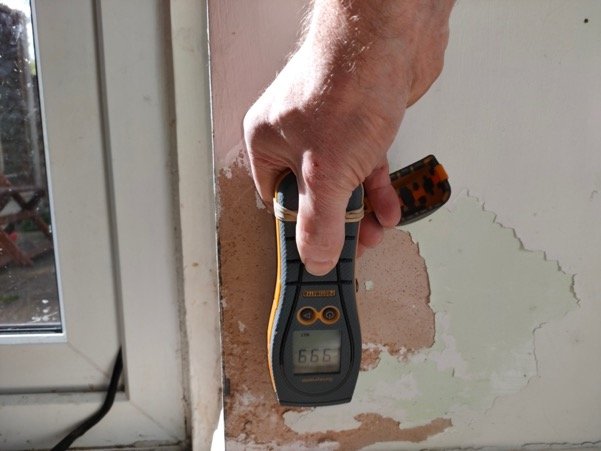 I use a radio frequency meter to measure deep within a wall. The wall is damp deep within it.

Water reflects radio waves at a set frequency similar to mobile phone shields. Meters can’t differentiate moisture from other dense matter such as metal and concrete. They help trace damp in a normal, homogeneous wall. Readings below 300 REL indicate that a wall is dry below the surface, 999 REL is the limit. These meters are for scanning, mapping and profiling, see surveyor.tips/profile. There are calcium sulphate salts on the surface. Calcium sulphate is a key ingredient in cement and other building materials. If diluted in water salts tend to move to the surface. These can be removed with sandpaper and decorated. 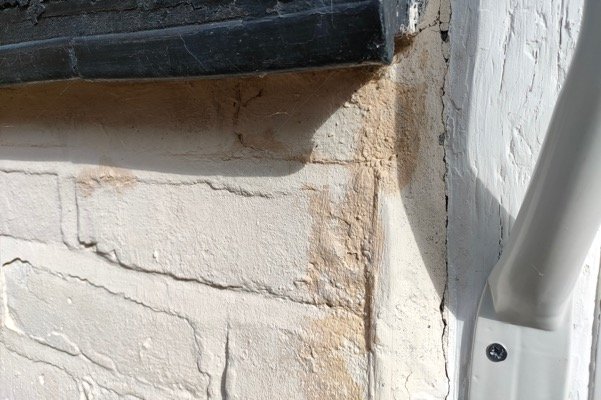 Immediately outside there is some discolouration suggesting that water occasionally flows over the brickwork.

Cracks on the outside, such as this one by the door, should be filled with an acrylic caulk. 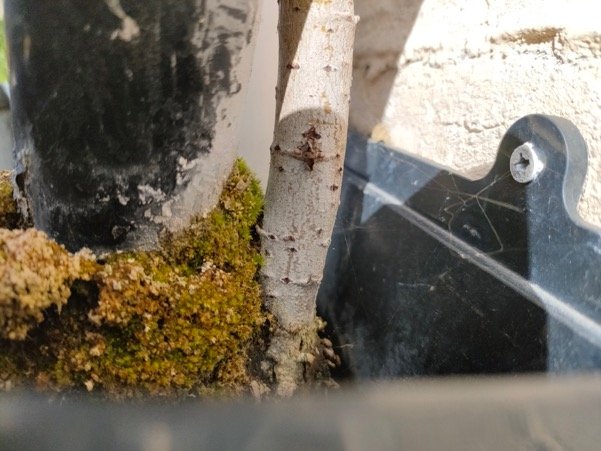 I found a sapling growing out of the hopper. I understand that shower water flows out occasionally. 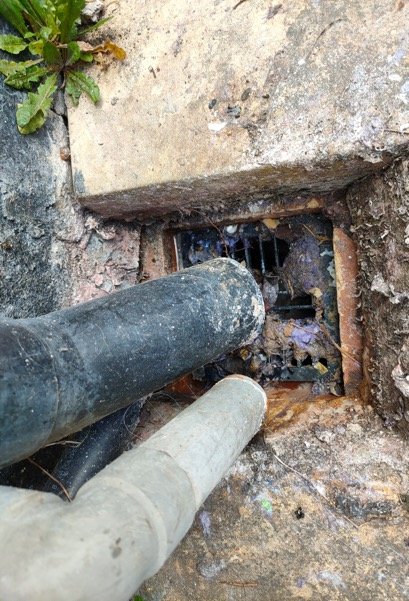 I understand that the rear kitchen drain blocks up regularly. Note the cracks around the drain.

Blocked drains can result in moisture flowing through cracks. Cracks should be raked out filled with a cement-based render. 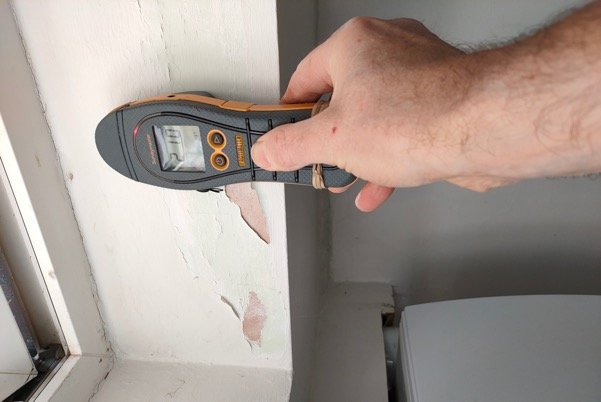 By contrast the damp meter reading under the lintel in both radio frequency and condensation mode was low. 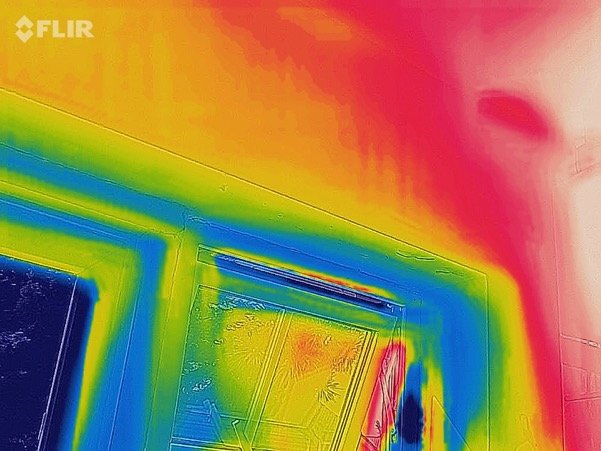 Looking through a thermal imaging camera you can see the heat loss underneath the lintel.

In the thermal imaging camera blue/green is about 5˚C colder than yellow/orange. 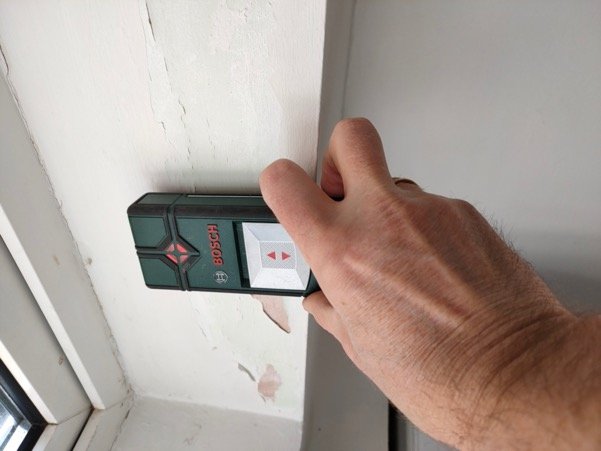 The metal detector demonstrates that there is metal within the lintel which would account for heat loss. 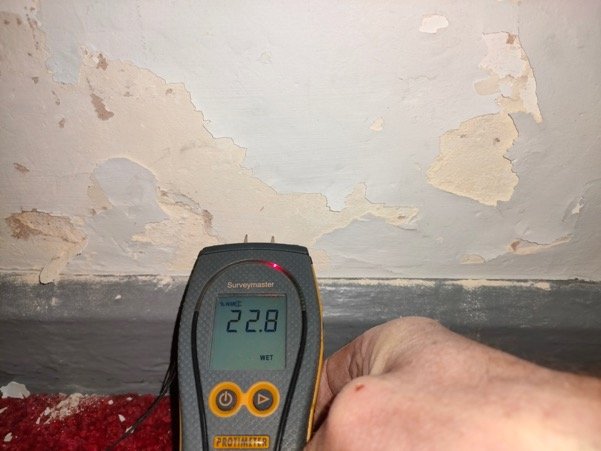 There was a modestly high damp meter reading along the party wall in the corner.

The flanking paint suggest that the issue is worse than the meter indicates. 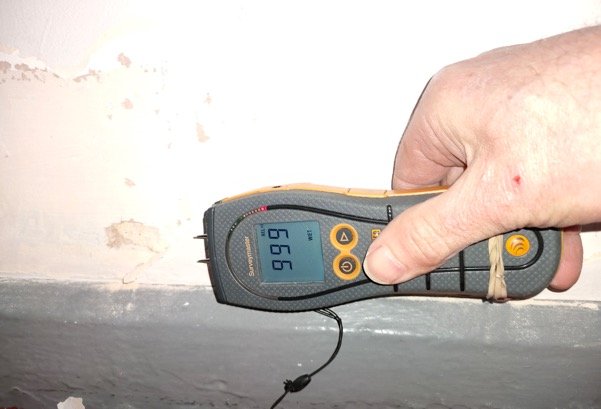 Again it was damp deep within the wall. 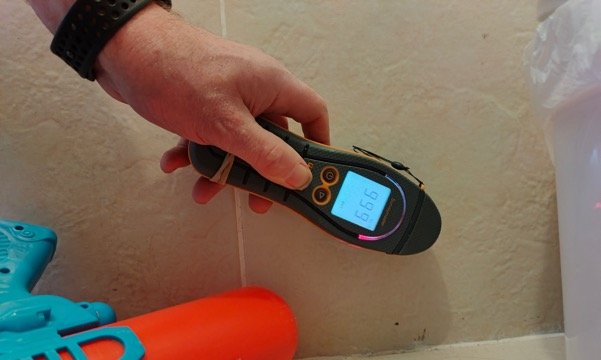 On the other side there is a toilet, where the floor is dropped below the suspended floor to increase the height.

Dropping the floor on one side, can cause problems as 1) it creates a thermal bridge, area of eat loss on this side, but as there are tiles, dampness is not showing. 2) potential bridging of the damp proof course, if for instance they used a permeable plaster.

The humidity in your subfloor void was not high, this suggests that there is insufficient moisture in the brick to require a damp proofer cause. However, if moisture doesn’t dry out despite reduced internal vapour on your side, and walls dry elsewhere, then: 1) consider removing the ground floor skirting board, cutting base of the plaster by 10 – 20mm back to brick (chisel, grinder or better still Oscillating Multi Tool, such as Bosch). Run a bead ~10mm of an absorption reducing Thixotropic cream such as DryZone by Safeguard (Amazon etc), along the exposed brick. Replace the skirting board. 2) consider asking your neighbours to replace plaster with a thermal insulating plasterboard at least below their ground floor. 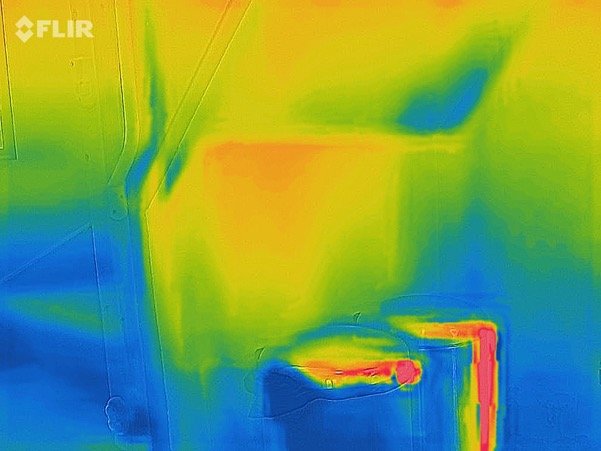 There is a cold spot by the warm despite the radiator.

My recommendation is to reduce and monitor the humidity and monitor dampness in walls for 10 months. If the kitchen wall remains dry but this wall remains damp then you may require your neighbours to remedy their side of the wall. 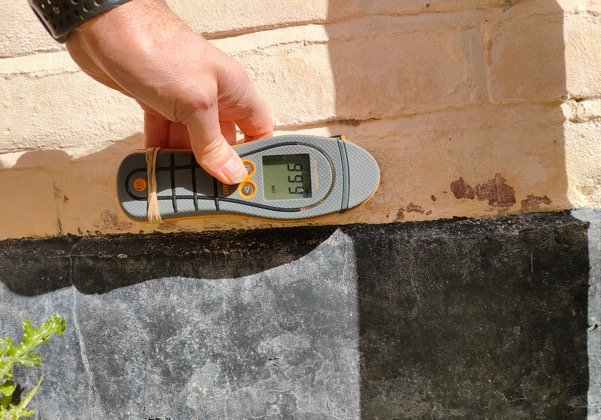 Masonry paint is flacking away, exposing the external wall. 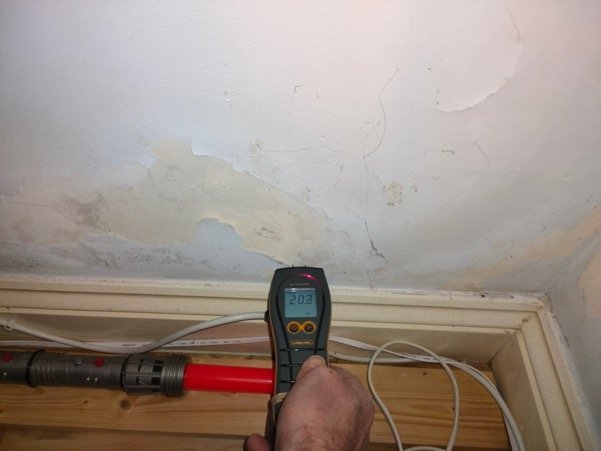 There is damp on the front reception section of wall by the front door.

This area is vulnerable to heat loss and therefore condensation. Note the mould. Mould is inhibited by nitrates found in groundwater. The presence of mould at the bottom of a wall eliminates rising damp as the cause and points towards unvented excess vapour. 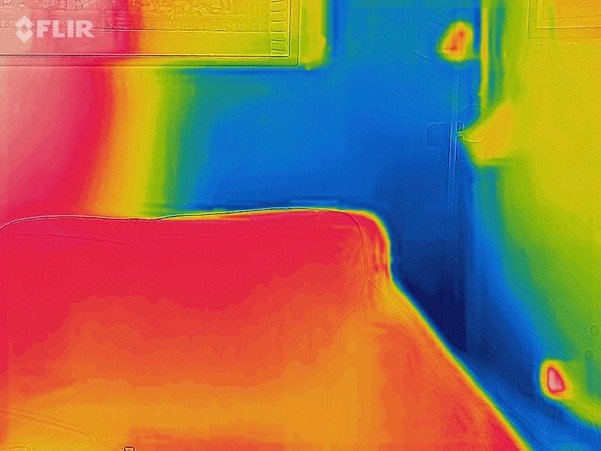 The thermal image shows that the front meter of wall it’s considerably colder than the rest of the room. 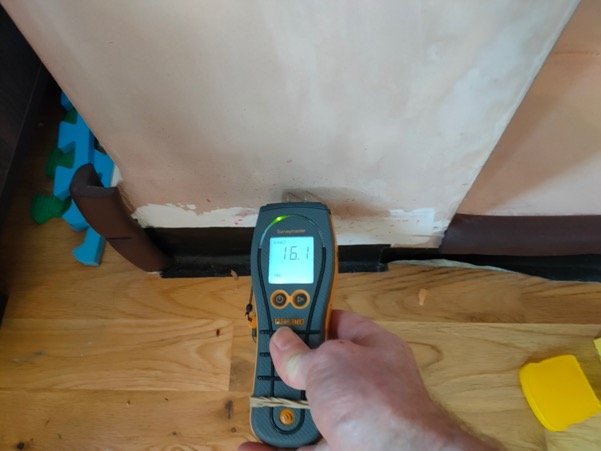 The newly plastered chimney breast is dry on the surface.

When you paint you should apply a drizzle coat made of about 50% water to 50% paint, to improve adhesion to the new plaster. 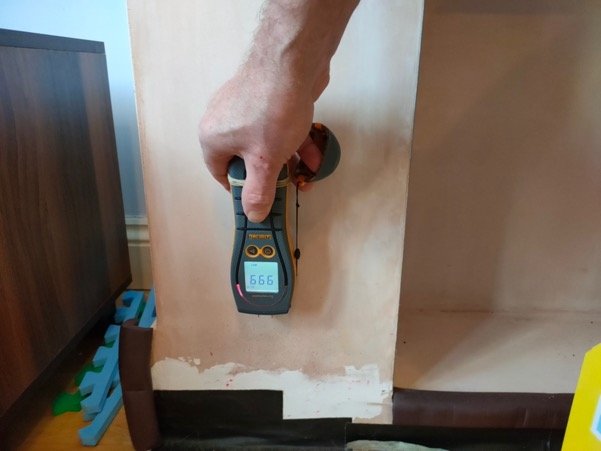 Unfortunately there is damp a deep within the wall.

Chimney breasts are often humid inside because there is a greater expanse of brick in the subfloor void, causing increased heat loss to the sub-floor void and absorption of sub-floor vapour. 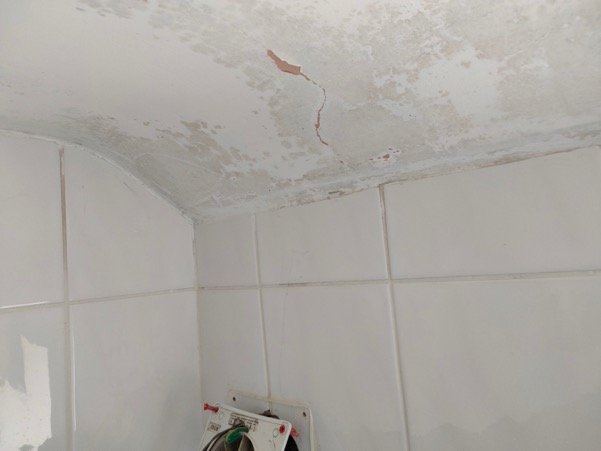 There is mould growing on the cold, uninsulated eaved ceiling of the bathroom. 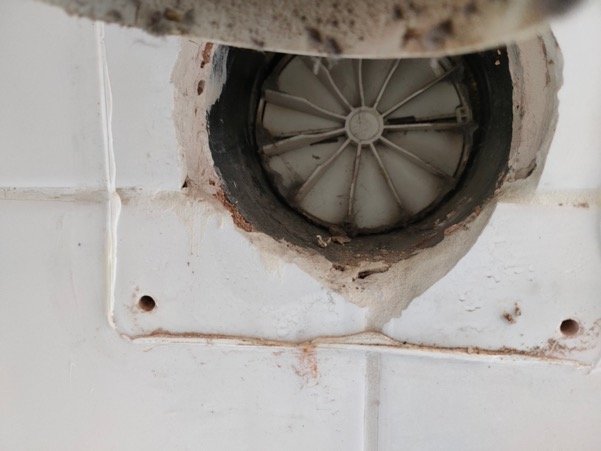 The bathroom vent is running very slowly not helped by a blocked back draught shutter, which I removed. 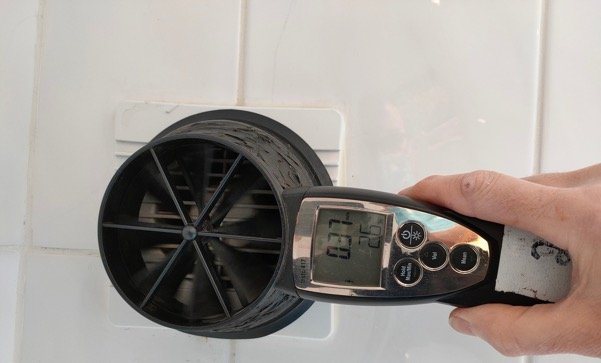 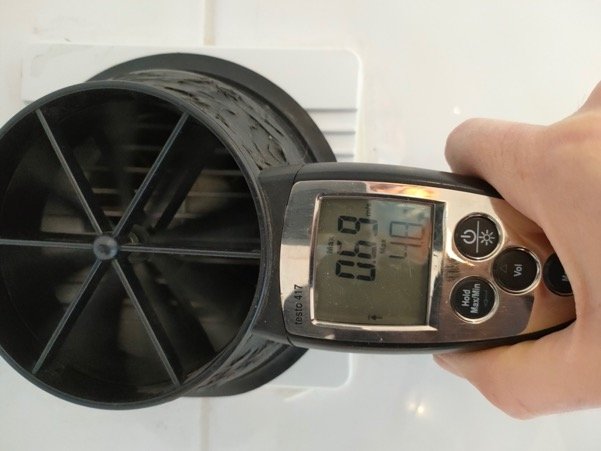 I improved the speed to 4.8 L per second, that recommend an and upgraded bathroom vent.