This architecturally renovated Victorian house had damp along the party wall. Naturally they assumed it was coming from the neighbours.

Condensation resulting from vents ducting into each other causing recycling. 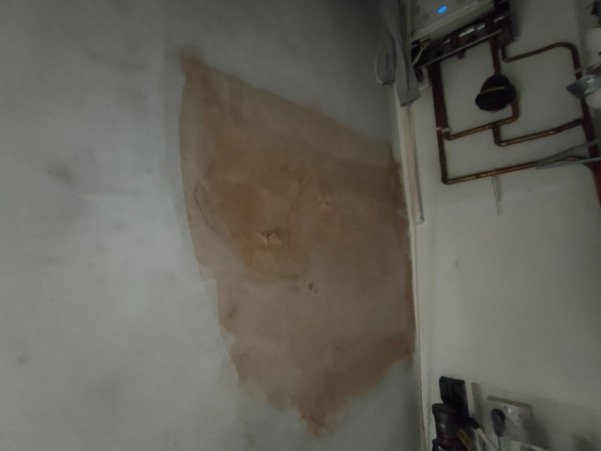 The original damp issue was caused by a leak to the pipe seen in the centre of this image. 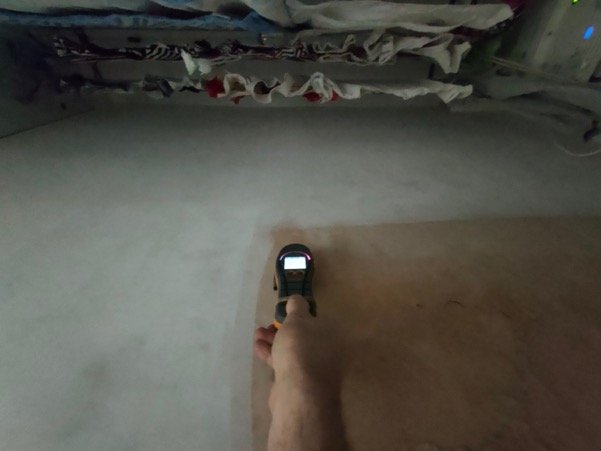 Using a damp meter I was able to detect damp from about 2.5M down to ground level.

I don’t believe I was aware you were drying clothes in this room. Clothes produce about ½ L per person per day. In my view you should have a continuous flow of air while clothes are being dried. I recommend an Elta Mori dMEV continuous flow fan, which provides 5 L/s of airflow with a 15l/s high humidity or light activated boost function, see actions. 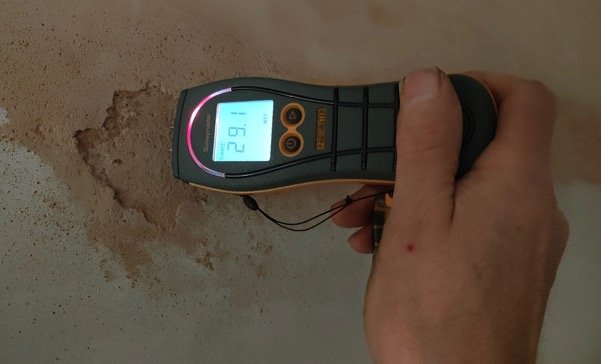 The worse of the damp is in the centre where there are surface salts and high surface meter readings.

My suspicions are that the water damage in the centre was caused by the original pipe leak. Calcium sulphate is puckering the surface plaster. Calcium sulphate which is also known as gypsum is a key ingredient in cement, plaster and other building materials. If diluted in water, salts tend to move to the surface. These can be removed with sandpaper, filled and painted when dry. The dry time could be months. 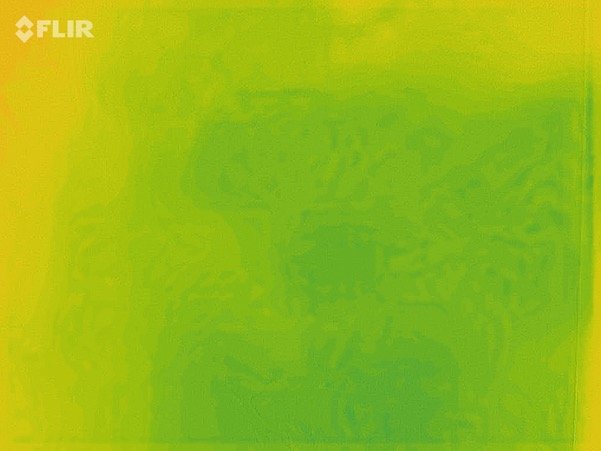 It’s difficult to tell with this thermal imaging lens but the wall is cold and damp down to the ground. 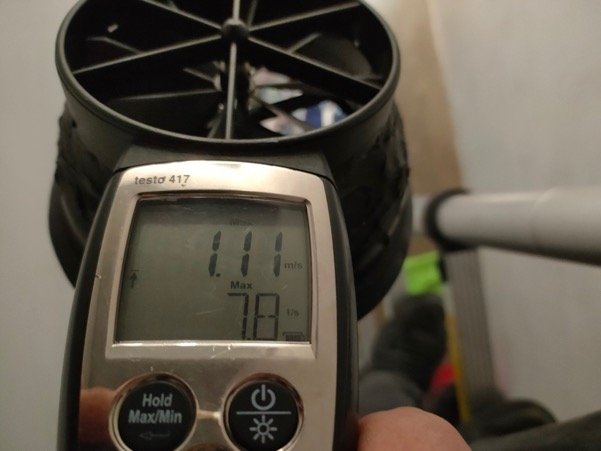 The extraction rate of the utility room fan is 7.8 l/ and only last a few minutes after lights are switched off.

Building regs. extraction requirements for bathrooms is 15 l/s for 30 minutes. Utility rooms produce similar amounts of vapour to bathrooms, but over a longer time period. 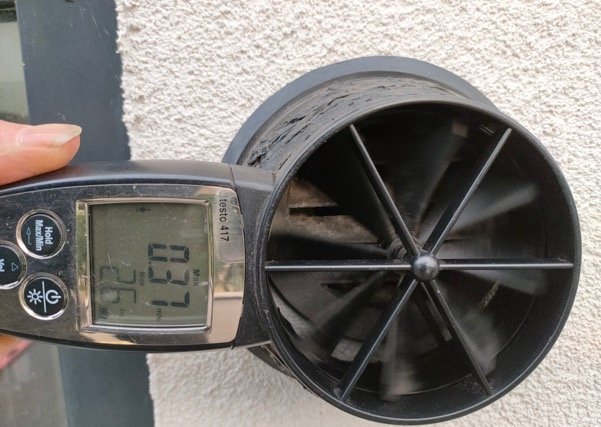 The extraction rate from the external vent is 2.6l/s, therefore only 50% of the air is being removed. 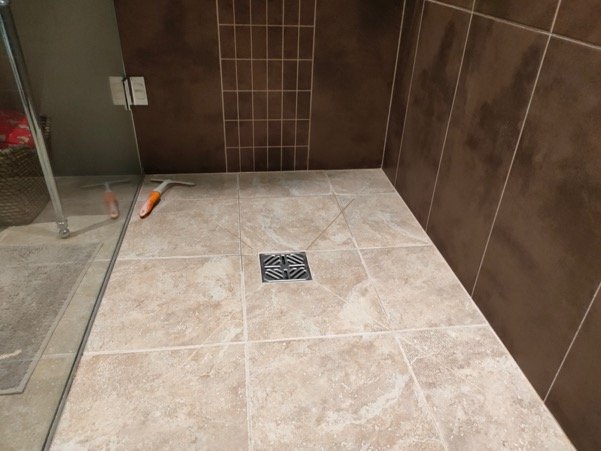 I visited the neighbours lower ground floor flat and found a shower on the other side of the damp wall.

It is possible that water is leaking through small gaps in the tiles. However, I could find no gaps and normally a leak would be accompanied by a stain which there isn’t on your side of the wall. 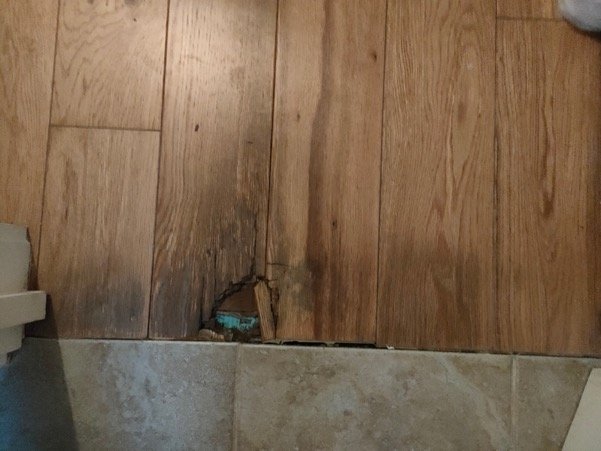 There is rot on the floor by the bathroom entrance. This suggests that water is flowing across their solid floor. 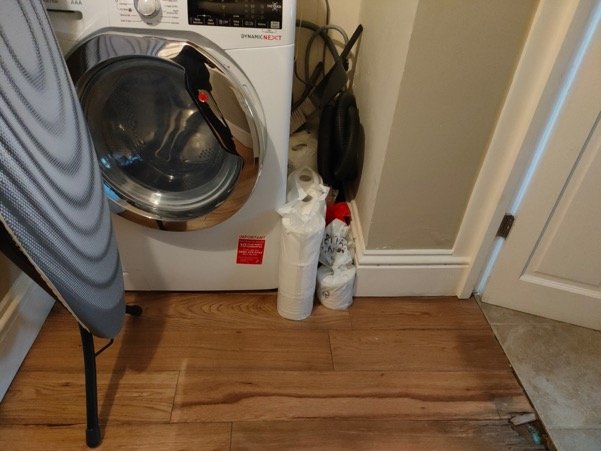 There is a washing machine in the alcove opposite the party wall.

I understand from the tenant that there was a leak and that the machine had to be replaced a few months ago. 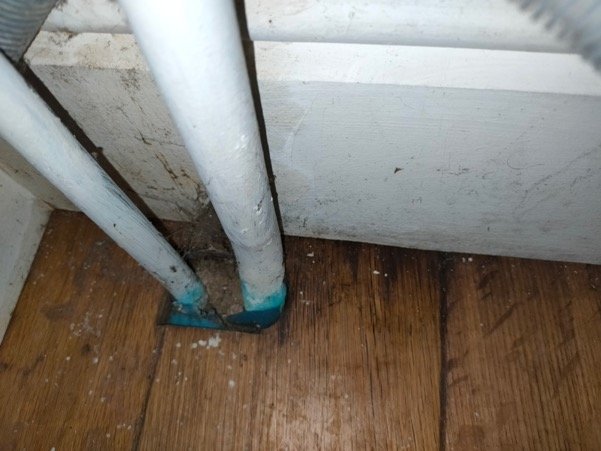 Looking behind the washing machine there was dampness on the timber floor.

I suspect that there is a small ongoing leak. Whether it is enough to affect your house is difficult to know, but it should be repaired anyway. 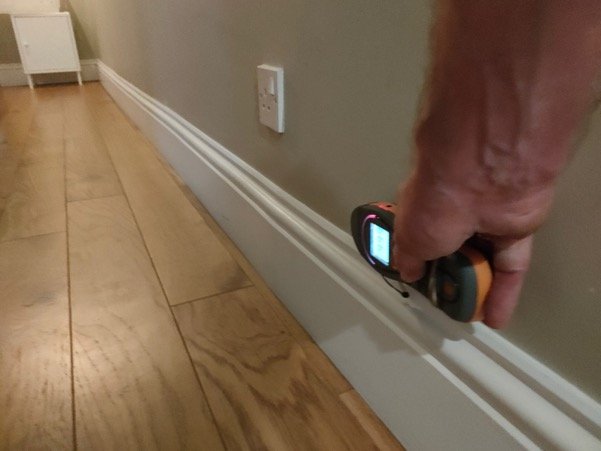 There was measurable dampness deep within the neighbour’s side of the lower ground floor party wall. 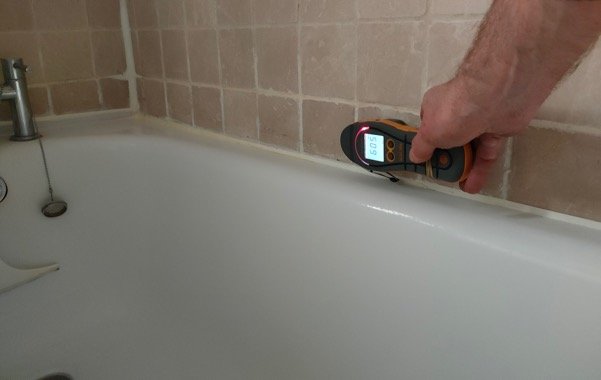 I visited the upstairs neighbour’s bathroom but found no signs of a leak or damage to grout.

If the issue as coming from this first floor flat you would expect dampness on your side to start higher, for there to be one or two discrete points of entry and discoloration from water being drawn through a wall. None of these were present. 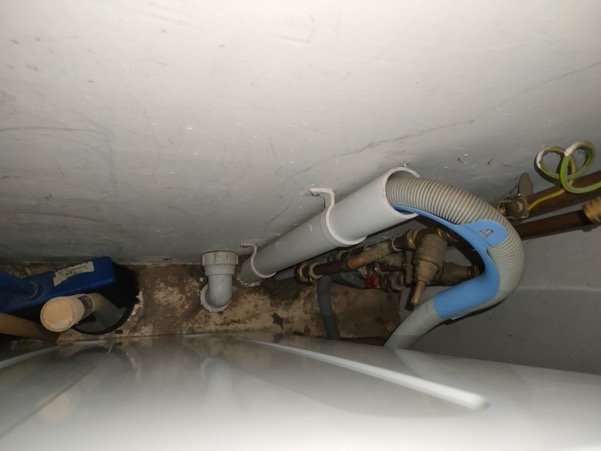 I checked behind the upstairs neighbour’s utility cupboard, there were no signs of damp there either.

This report is provided to help the owner of the property as a courtesy, without payment or benefit from recommended actions and therefore without accepting any responsibly.