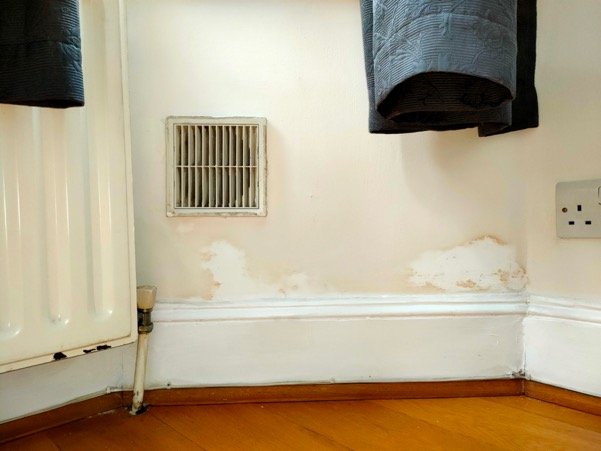 There is discolouration to the front wall. A film was put over the airbrick causing heat loss without ventilation.

The tenants were drying clothes in the front room whilst blocking airflow. 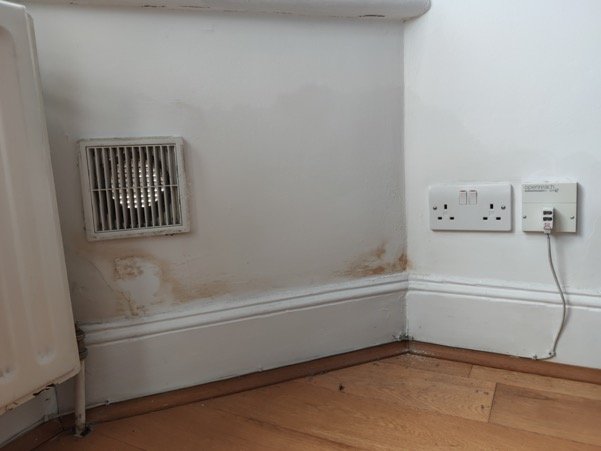 The wall and discolouration has not changed significantly since 2020. 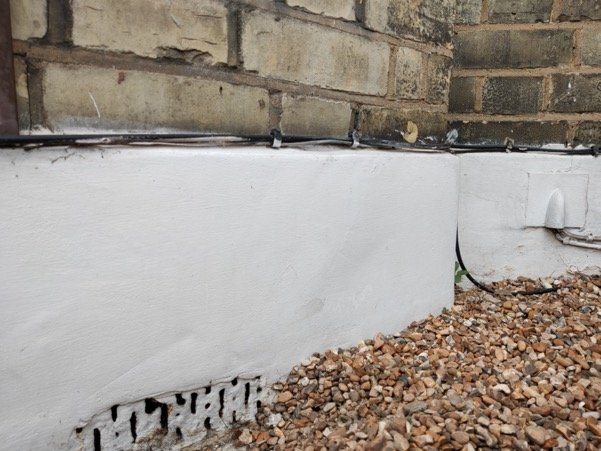 Shingles to the front were causing water to enter into the sub-floor. I moved the shingles back from the vents. 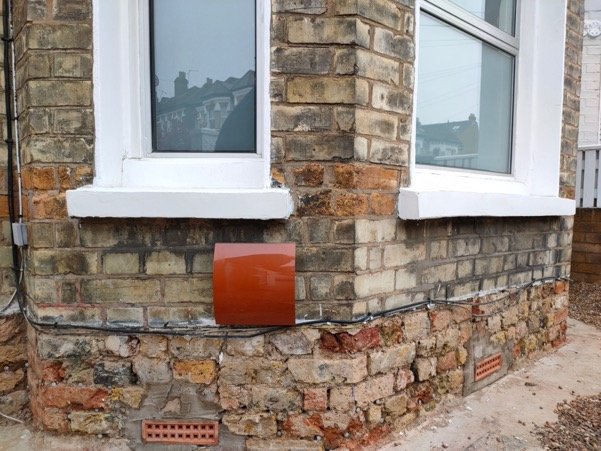 The render plinth has been hacked off, chemicals injected, and sub-floor vents replaced.

Rising damp is from walls absorbing groundwater, i.e. the water under the water table: the risk is remote as: 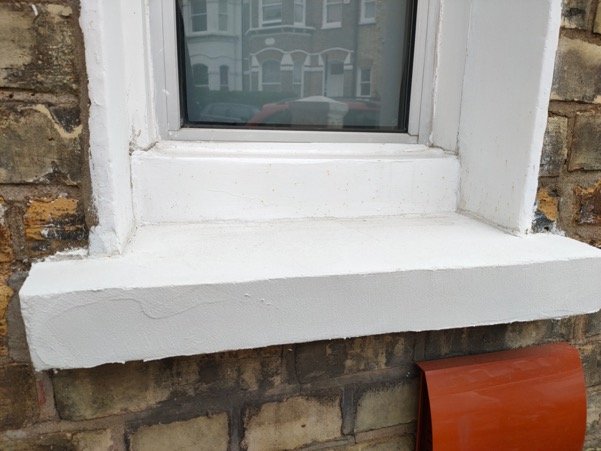 The windowsills have been sealed up, which looks good. 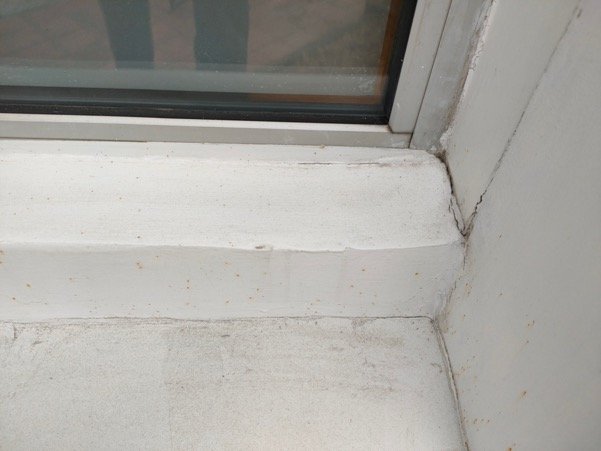 The builders should confirm that they plan to seal all remaining gaps, such as visible here. 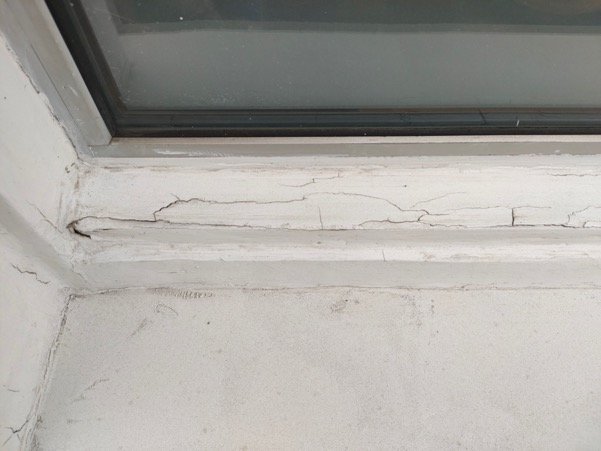 The timber should be stripped, sanded down and repainted to reduce the risk of window rot. 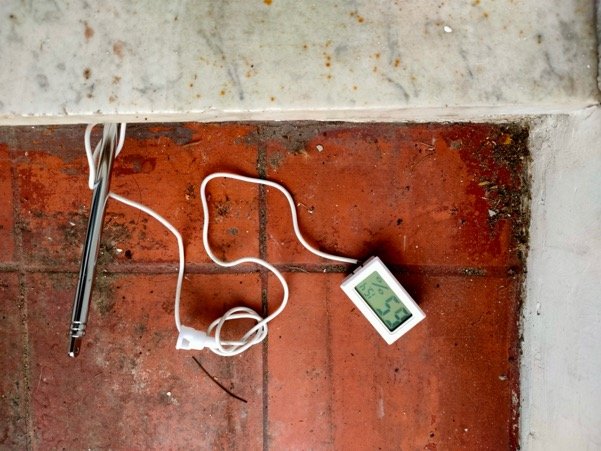 The sub-floor relative humidity is 65%RH which is normal, confirming that there is no rising damp. 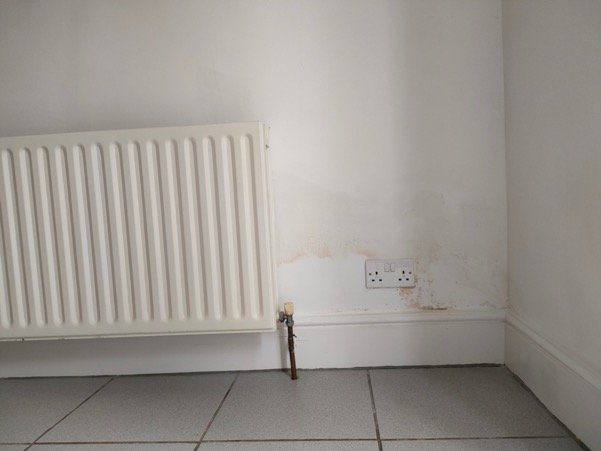 The dampness to the kitchen in 2020 was believed to be caused by poor ventilation or a leaking heating system. 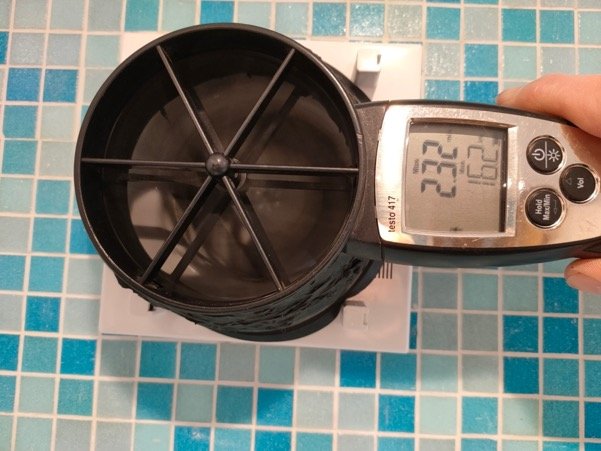 Since I improved bathroom ventilation last year, humidity from the bathroom is no longer likely to be a factor. 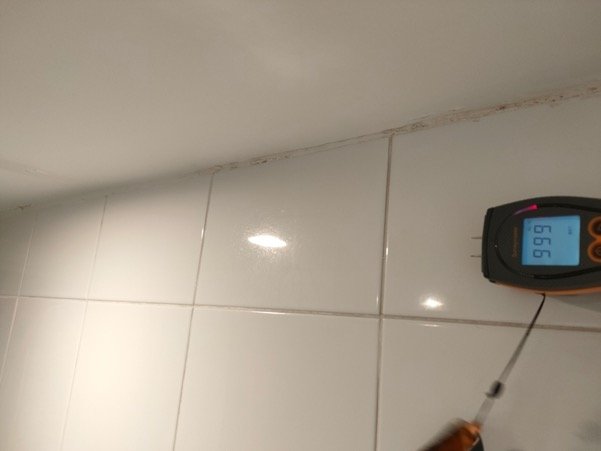 Dampness is detectable high up on the wall. This could be from showering or a neighbour. 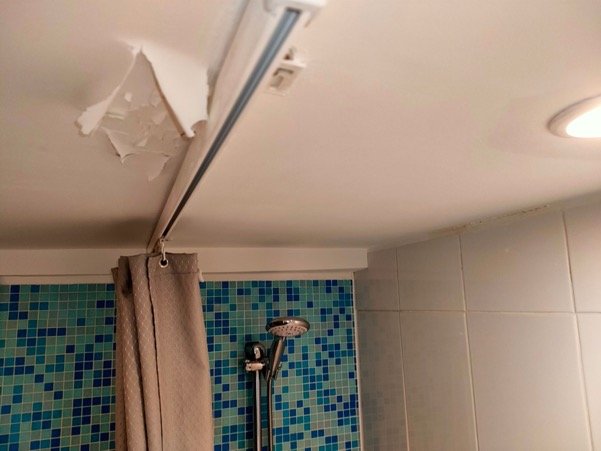 Surface salts are visible on the ceiling. I tried to access the flat above and the side, neither where occupied. 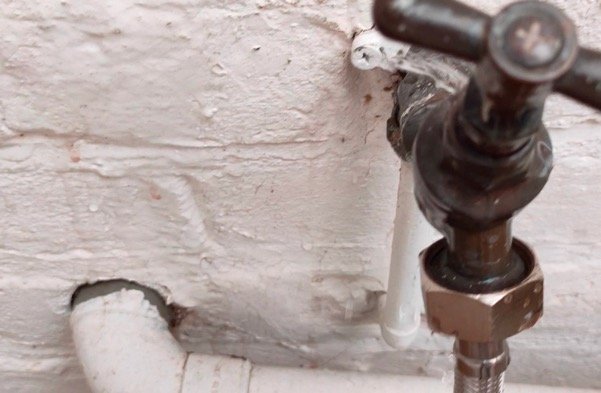 The external tap leaks when it is running. I could not test for pressure loss from the mains. 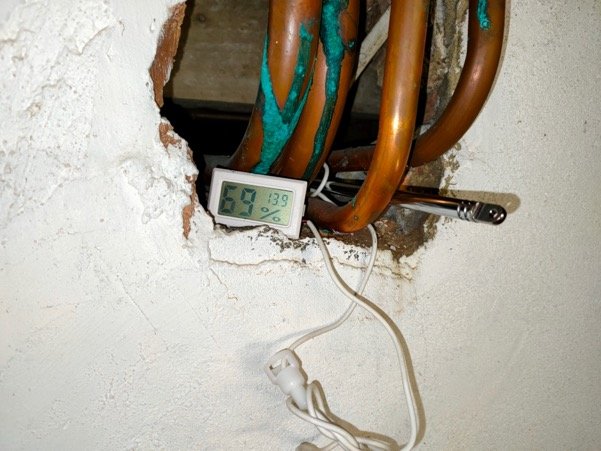 The sub-floor relative humidity to the rear is also low.

Conclusion from a process of improving obvious defects first and elimination:

4) since the vent was repaired in 2020, condensation is less likely on this wall (but can never be eliminated without supporting data),

All evidence points to a slow heating system leak as the most likely cause, 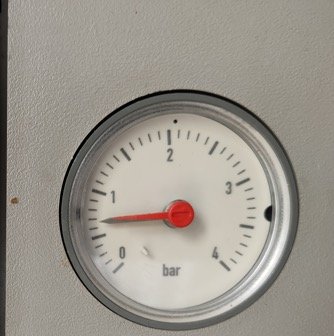 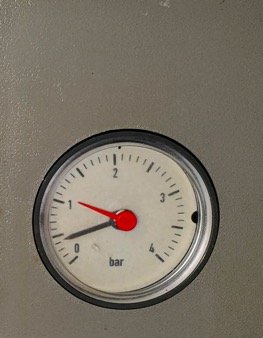 The heating system has lost water pressure since 2020 suggesting a leak, is it topped up during winter?

When I surveyed last year, I believed that this damp reveal was caused by condensation as the bathroom fan was ineffective, so I fixed the bathroom extractor fan so that it now runs above Building Reg. requirements and for 30 minutes. If the fan was kept running and the property heated as it should have been, then the wall should have at least partially dried out since last July. However, the reveal is still damp. Dampness on the shower wall up to the ceiling suggests that the issue is compounded by another source, either from a neighbour or the shower. I tried visiting the flat above and to the side, but the occupiers were not at home.

Action: This is likely to be caused by the central heating system leak, probably coupled with insufficient use of kitchen ventilation.

The cellar walls are normal dryness for a London Victorian property. Cellars were built to allow moisture from rain to evaporate out through sub-floor vents.

Unfortunately the walls have been covered in a moisture retaining coating that water is trying to break through from in places. It would be better to remove the coating and allow air to evaporate away, but the benefit hardly justifies the cost, in my humble opinion. It could be tidied up by carefully removing flacking masonry every so often.

Some people use “StormDry masonry protection cream” made by safeguard. I think it’s similar to the Silane/Siloxane Thixotropic cream used by most damp proofers – see instructions/Safeguards website. I understand that it is designed to stabilise brick, allowing evaporation while reducing absorption. I wouldn’t use it myself.

This action list is provided to help the owner of the property as a courtesy, without payment or benefit from recommended actions and therefore without accepting any responsibly.