The property is an a semi-detached Victorian lower ground floor flat with a solid wall made of two brick widths (225mm). The front door faces north.

Changes to the property’s original design

Properties are not designed and built with damp problems. Understanding changes to a property since first inhabited is the starting point for tracing damp back to its root cause.

There was condensation and mould caused by thermal imbalance and insufficient use of ventilation.

The property has been damp proofed. However the issue is excess condensation through insufficient ventilation. 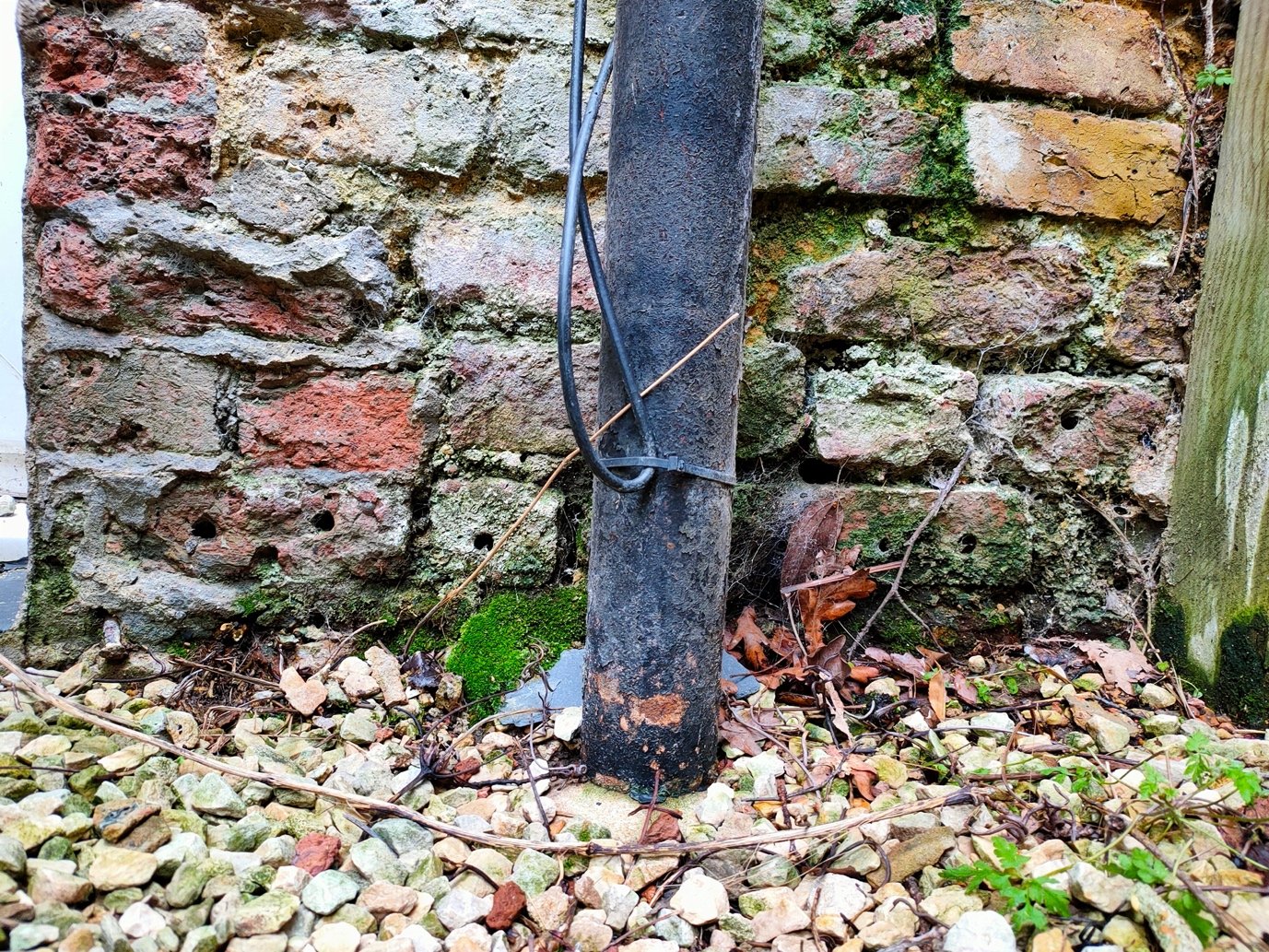 Holes at the base of the wall shows that the property has been damp proofed using chemicals.

Unfortunately the damp proofers have damaged the plinth, which should be reinstated. 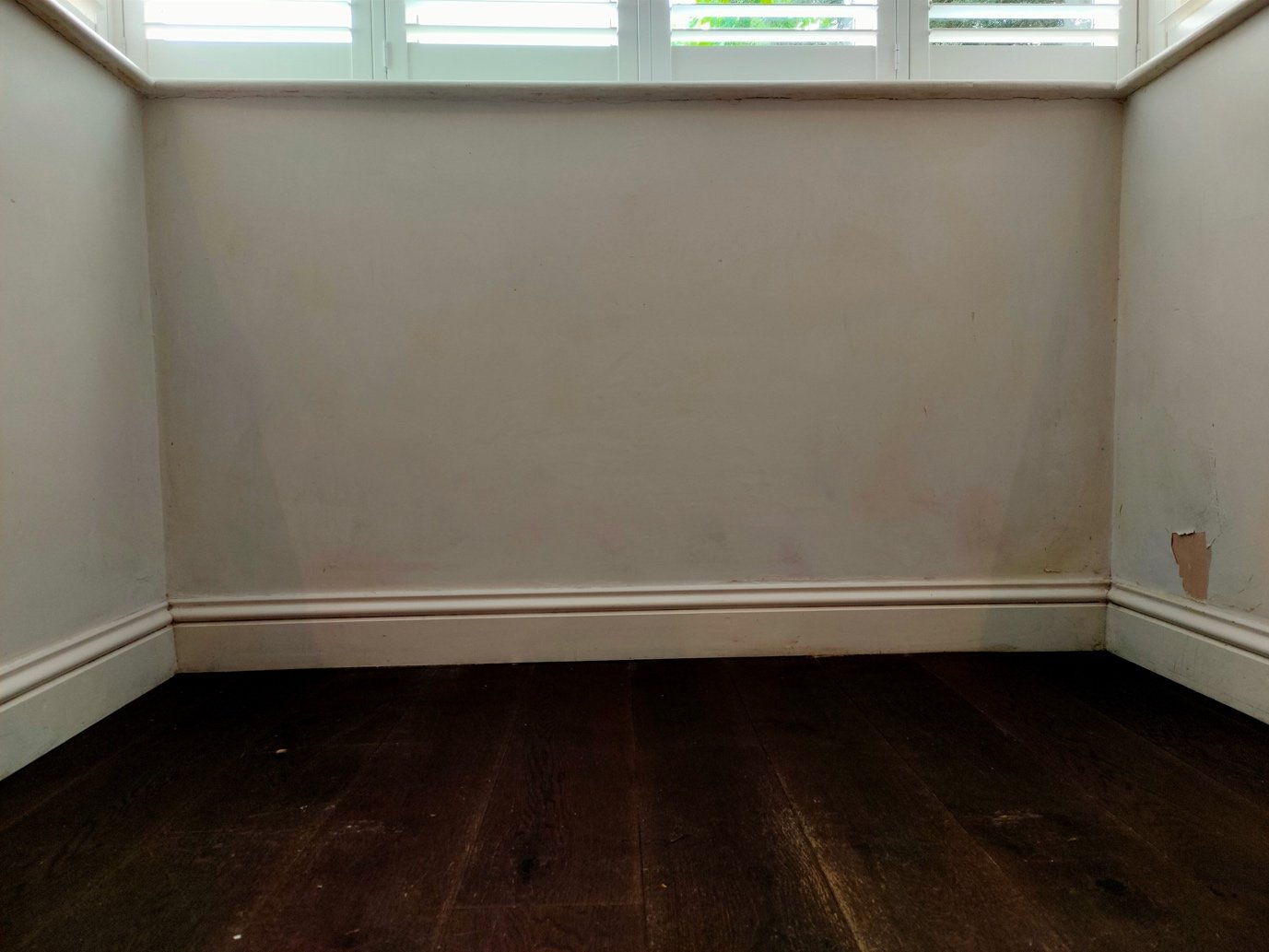 Signs of dampness, surface salts and mould was found on front bay.

There are a number of damp issues in the property they all come down to one root cause.

The front Bay has mould and flaking paint from surface salts. FACT: white surfaces salts are typically calcium sulphate, a key ingredient in cement and other building materials. If diluted in water salts move to the surface. Use sandpaper to remove salts and decorate. 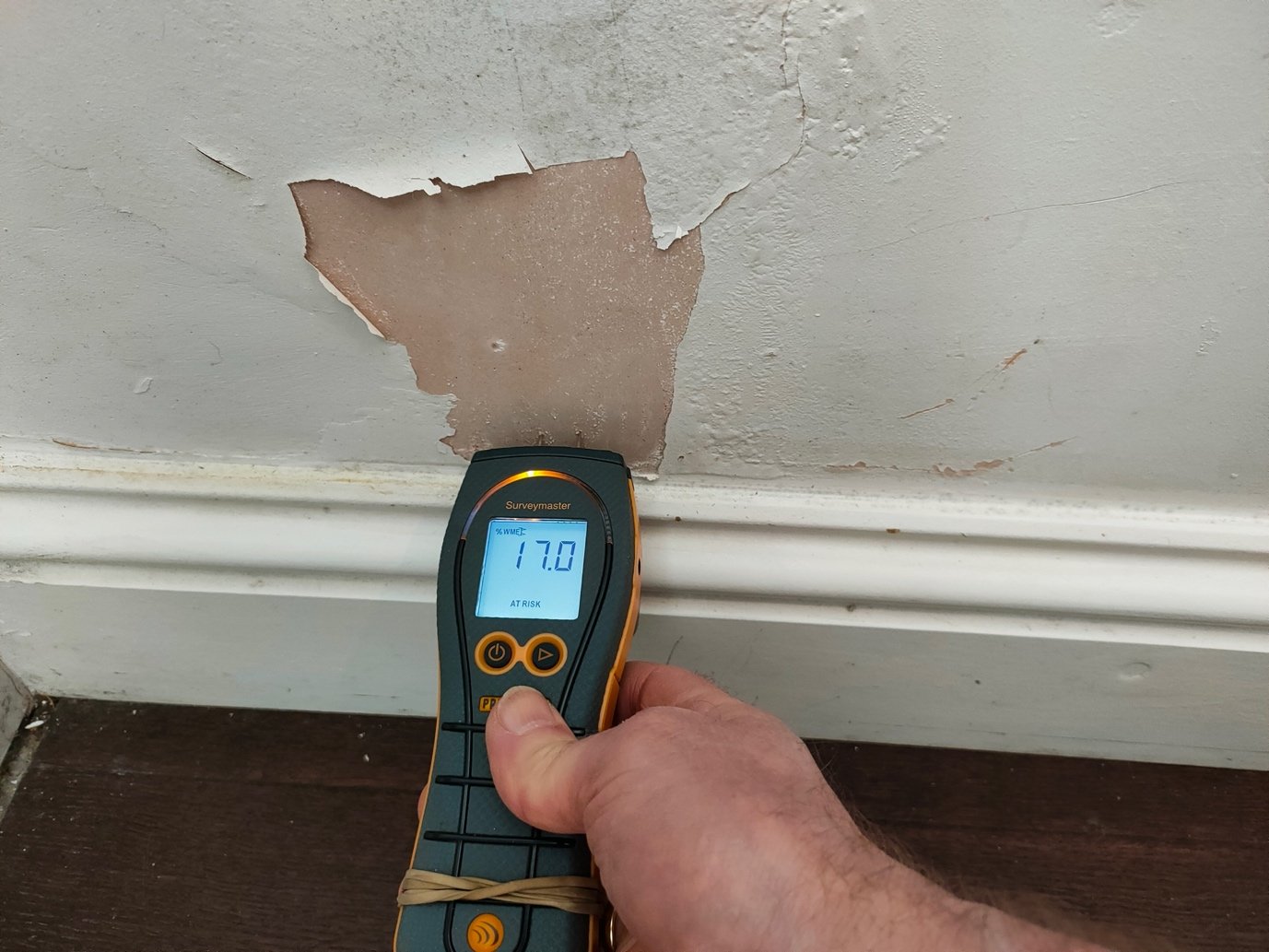 Mould was growing at the base of the wall next to the surface salts.

TIP: detecting surface damp. The wall surface was dry at the time of the survey there’s mould above surface salts. FACT: mould is inhibited by nitrates Groundwater is rich in nitrates. The presence of mould at the bottom of a wall eliminates rising damp as the root cause and points toward condensation from unvented excess vapour. 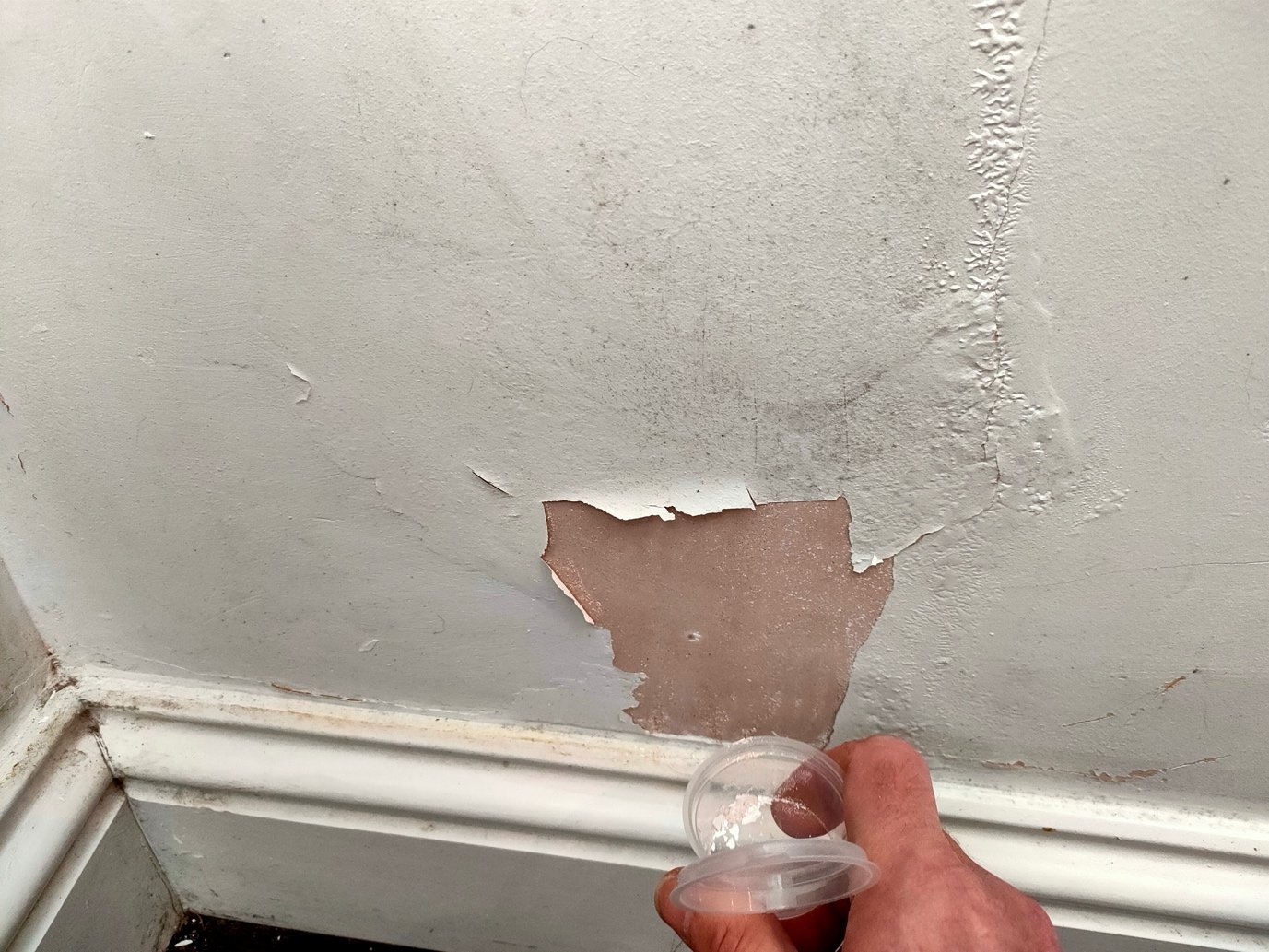 TIP: testing for nitrates. There were no significant quantiles of nitrates. If there are no nitrates, then we can eliminate rising damp as root cause of damp. 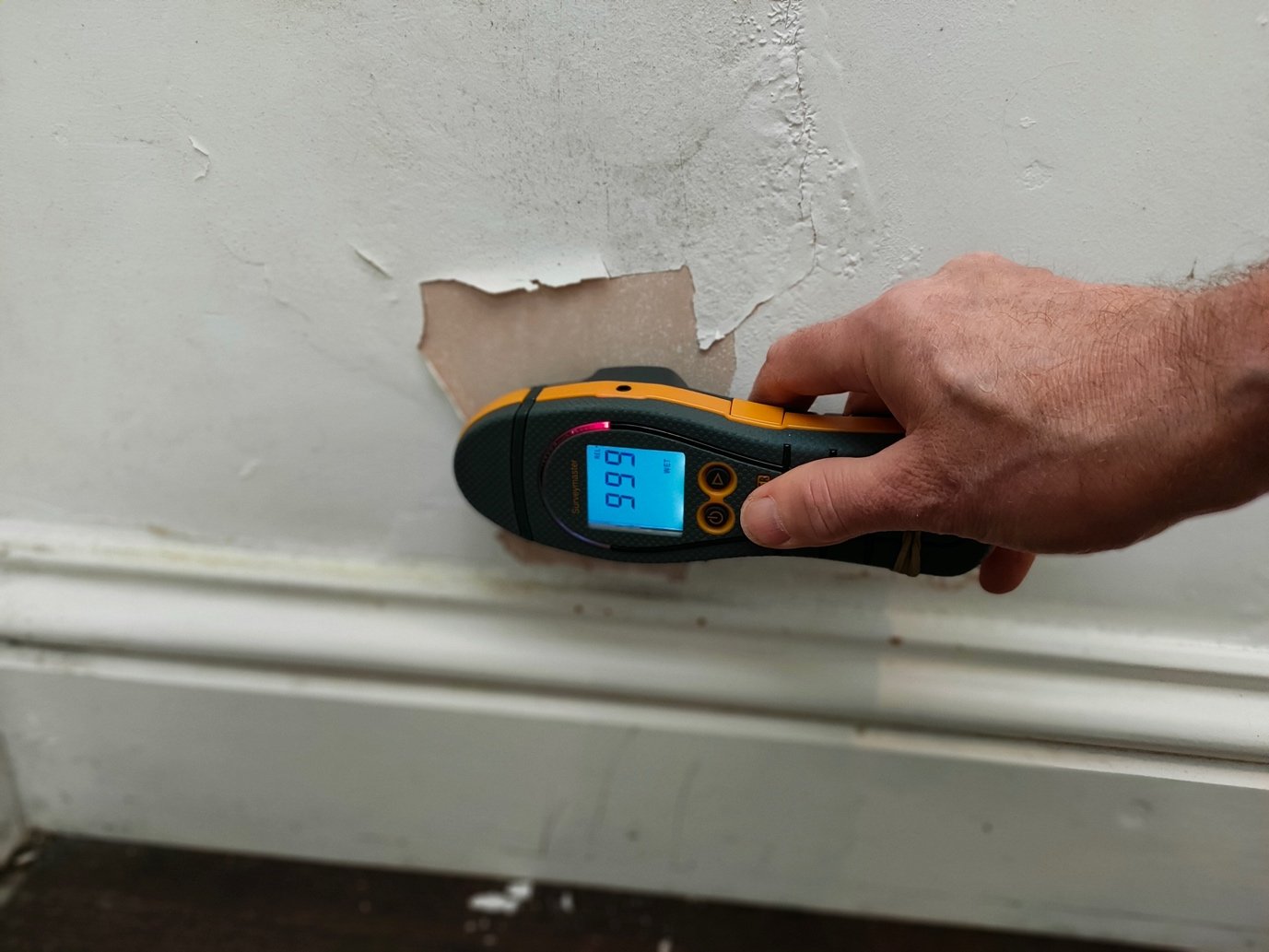 There is dampness deep within the wall.

TIP: dampness deep within a wall when there is no surface dampness is often a sign of moisture trapped by an impermeable surface replaced as part of damp proofing treatment. 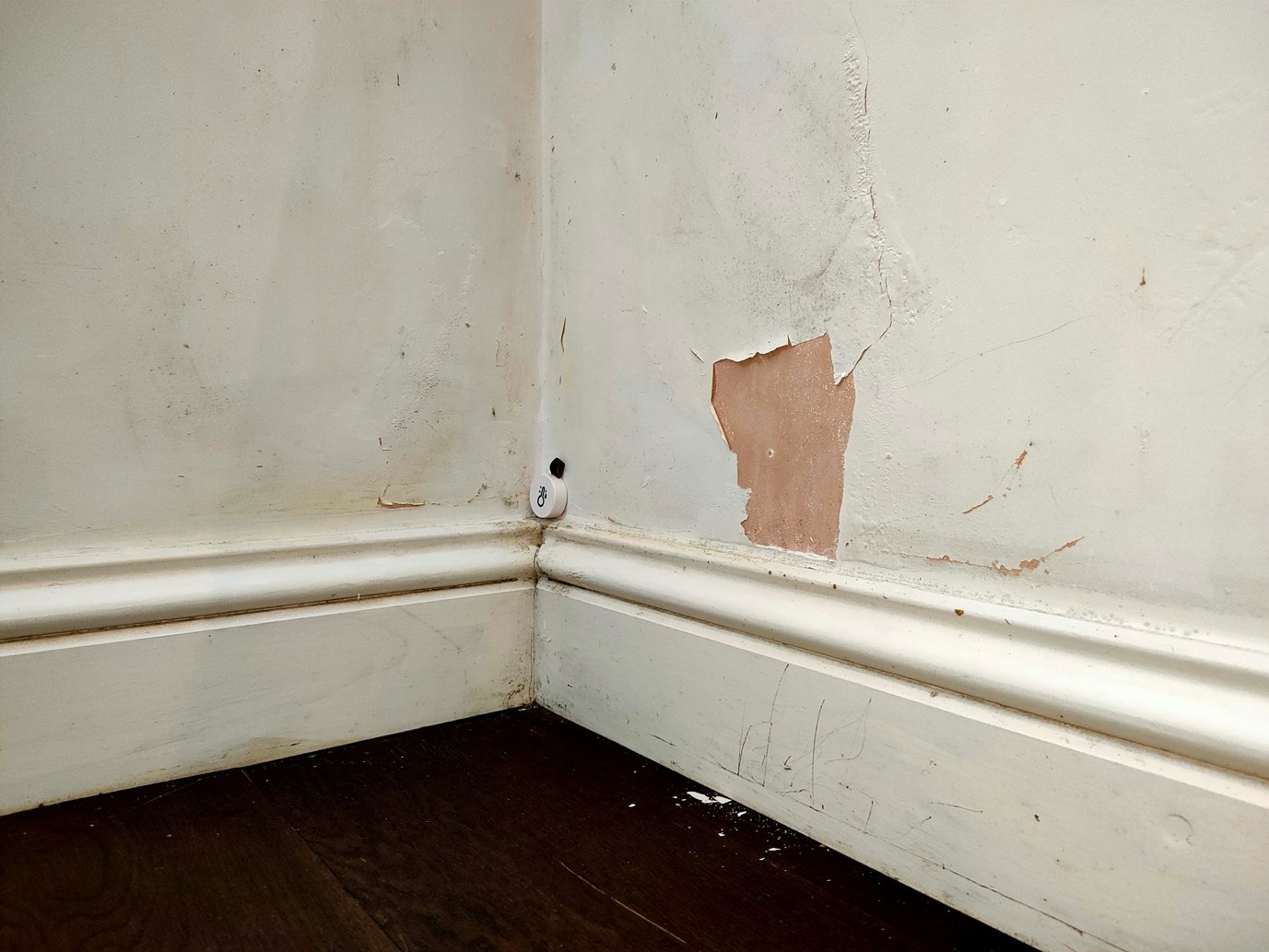 I left a data logger to record relative humidity and temperature overtime.

TIP: dataloggers log relative humidity and temperature over time. They can be used to help determine the cause of damp, and sometimes if a wall is drying out. 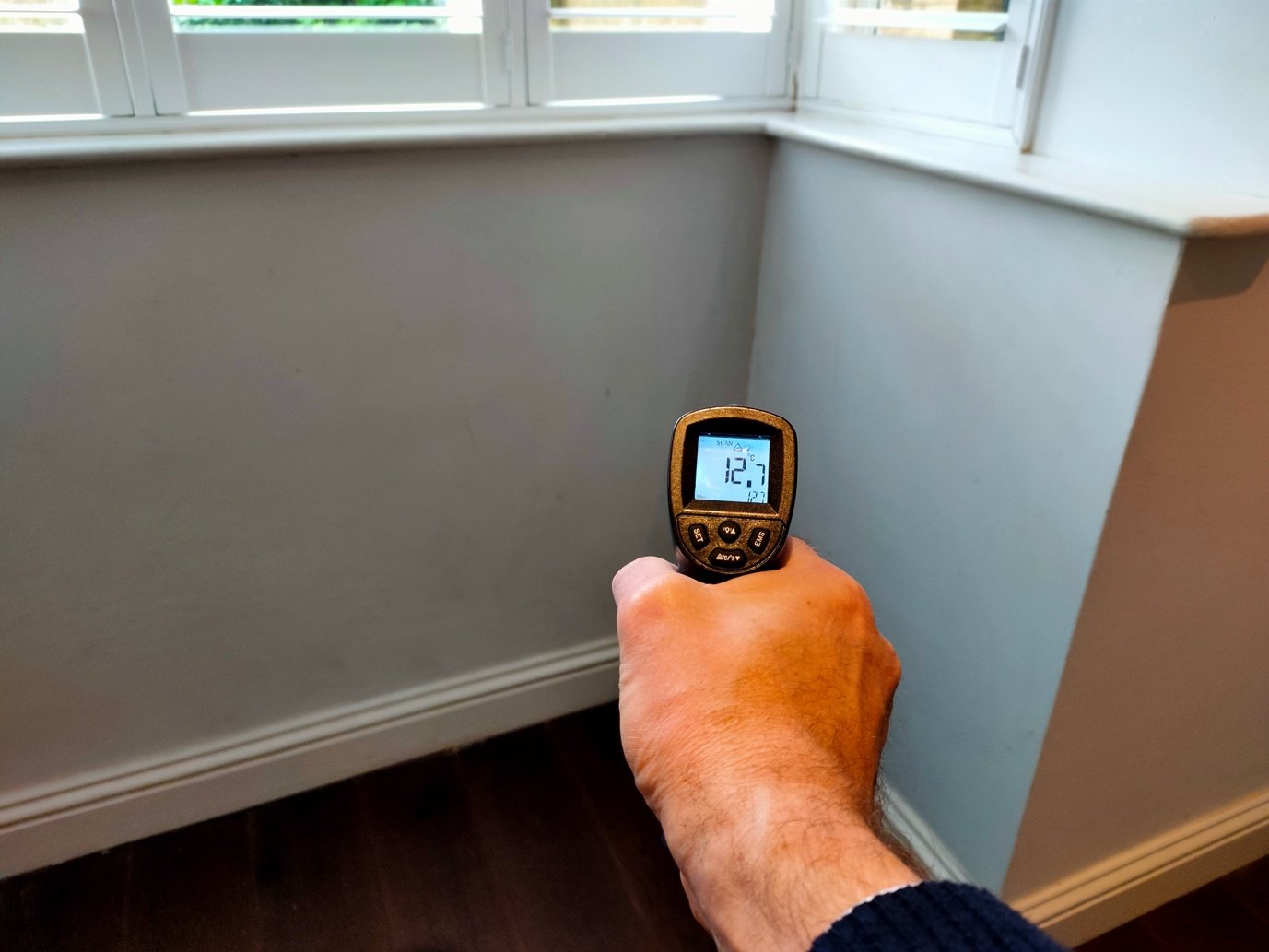 I measured the temperature as 12.7°C this is compared to an ambient temperature of 16.4 °C.

TIP: measuring heat loss. Condensation will form on the coldest part of a property first. 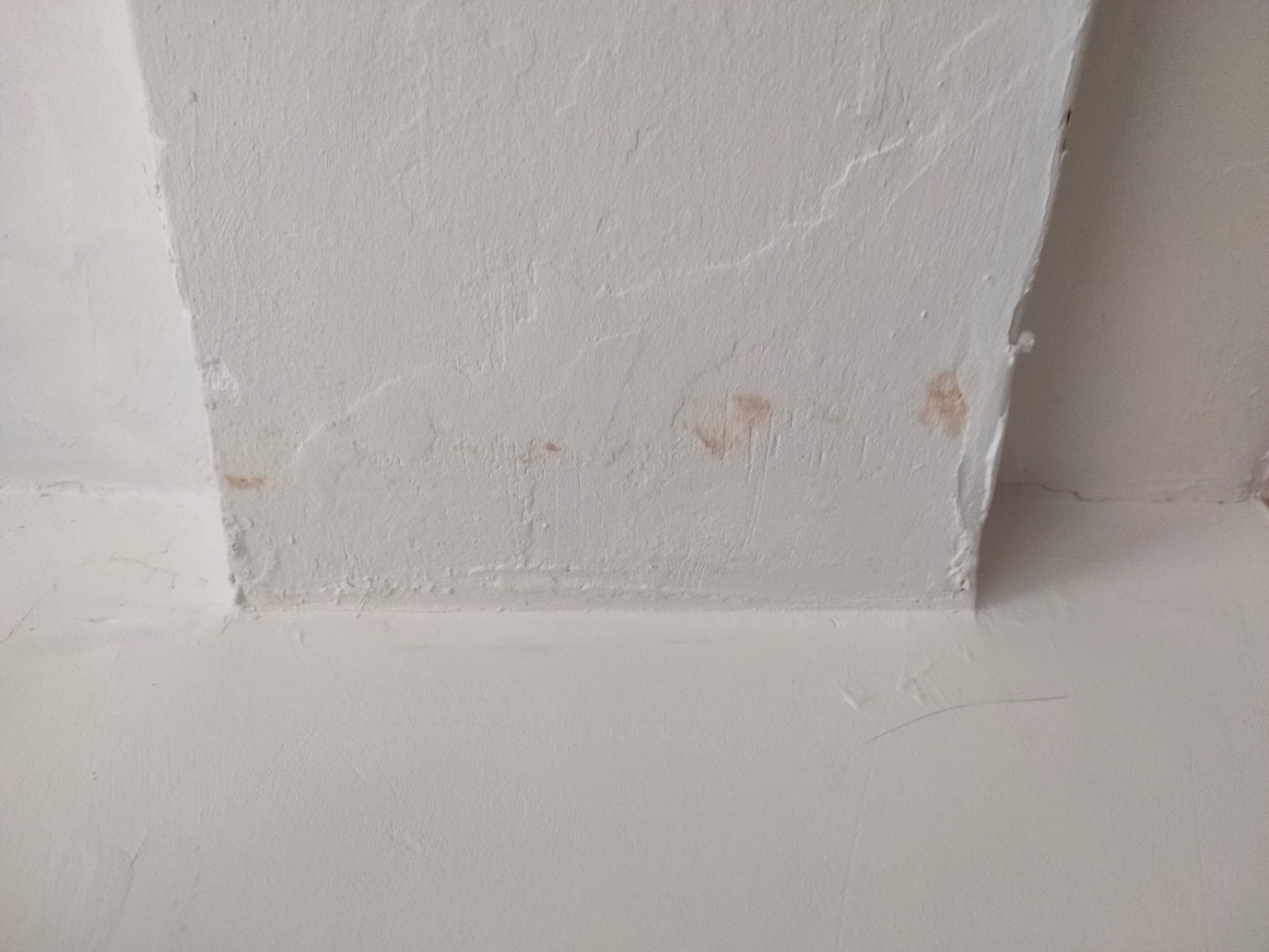 There is damp at ceiling level underneath under a steel beam known as an RSJ. 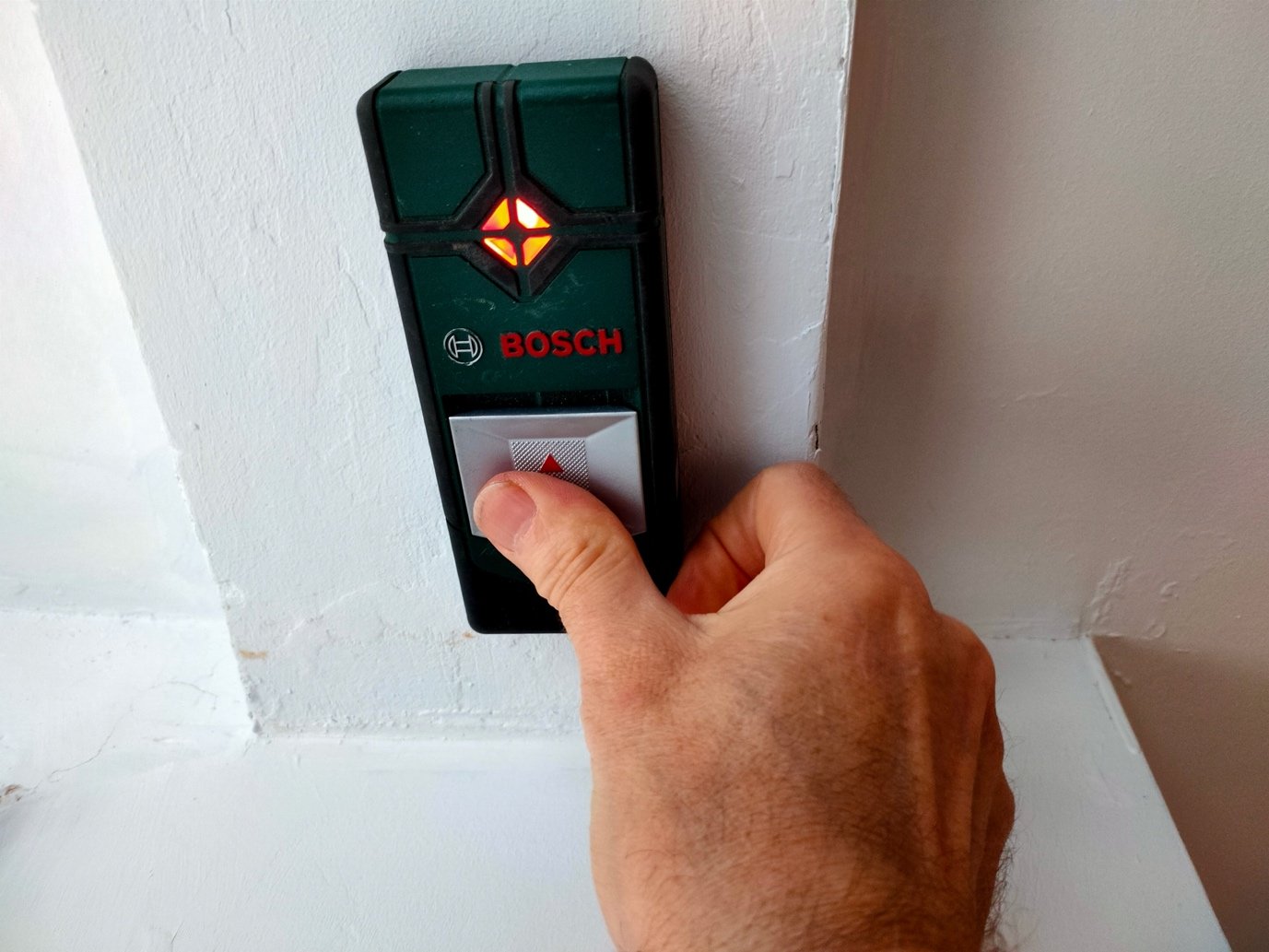 Using a metal detector I determined that there was a large metal beam.

The discoloration is almost certainly rust under the condensation forming on the steel beam. 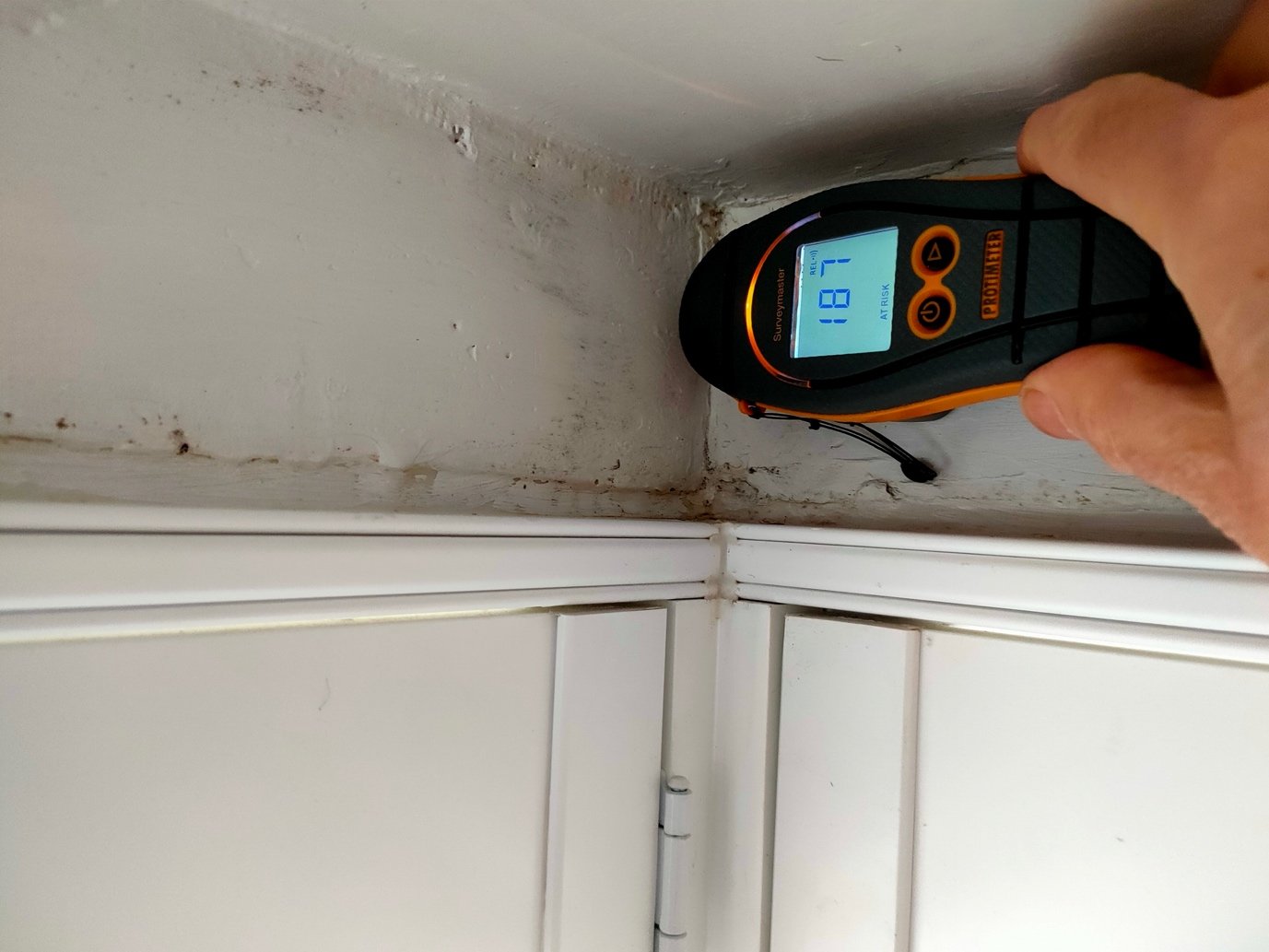 Mould is growing high up in the corner. At the time of the survey this wall was dry. 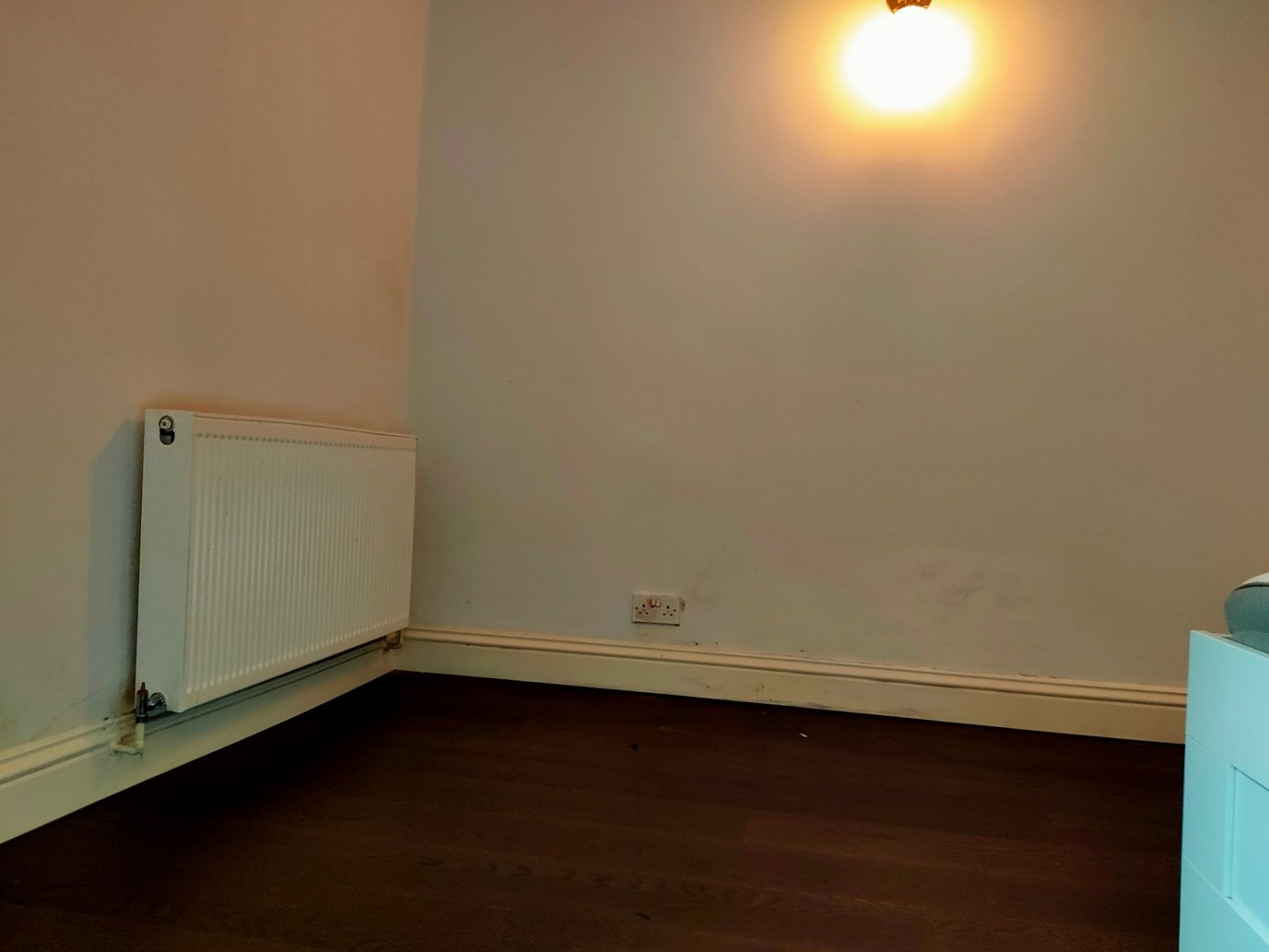 Mould is growing in the master bedroom on an internal wall.

I understand that the tenant had a lot of camera equipment stacked up against this internal wall reducing air flow he also turned the radiators off and the bedroom. FACT: airflow restrictions cause a built up of surface humidity creating the perfect environment for mould. 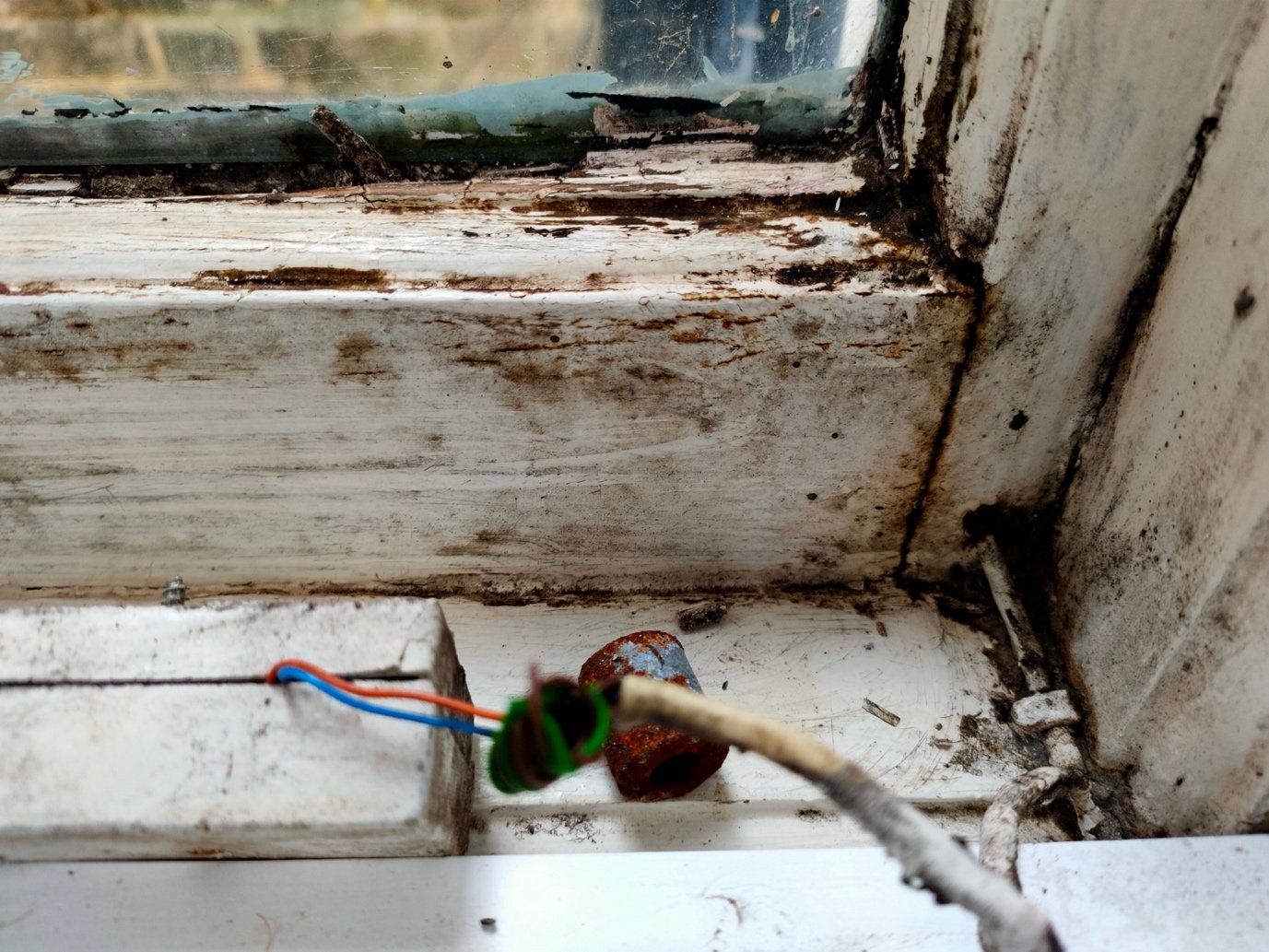 There are early signs of window rot.

FACT: single glazed windows are prone to window rot from condensation. FACT: window rot is common in period properties. TIP: cut out rot, apply wood glue, hardener and filler, sand down and paint with a gloss paint to protect timber from water (the cause of rot). 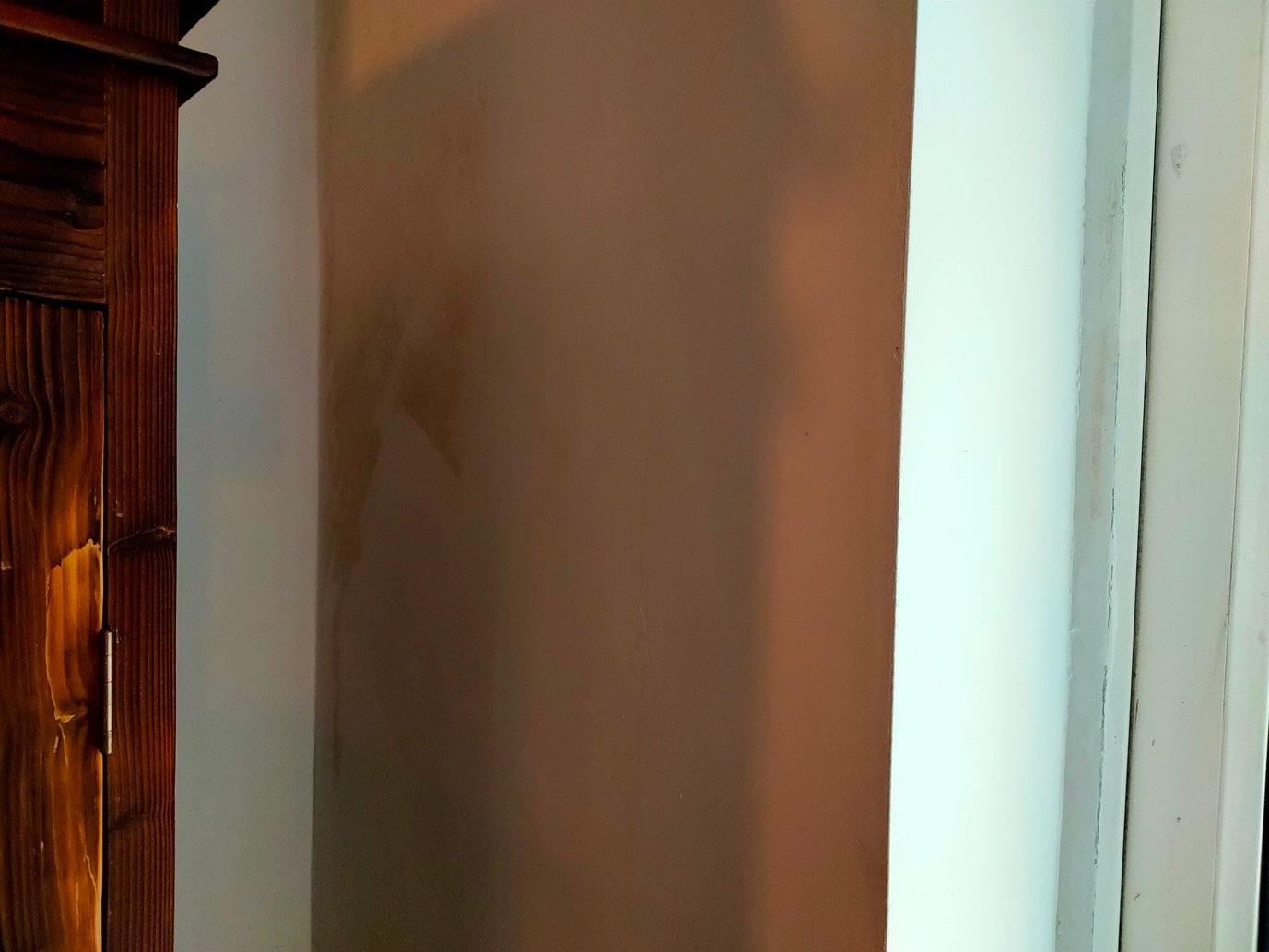 Mould is growing behind the bedroom cupboard.

FACT: cupboards by external walls are at risk of mould. TIP: insulated between cupboard and wall. 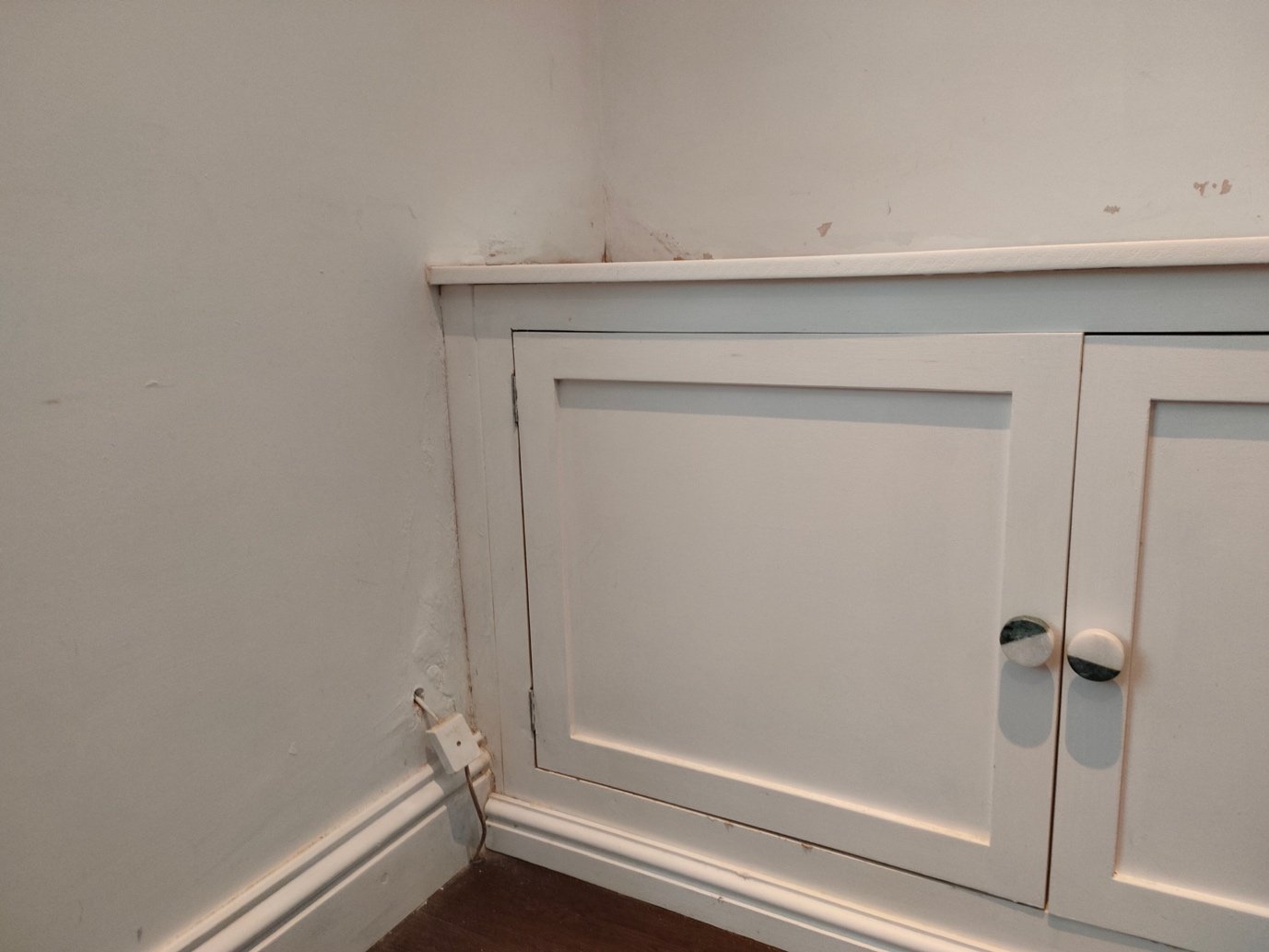 Calcium sulphate salt are appearing around the sides of built-in cupboards.

There are three interrelated causes of the disruption. 1) excessive vapour, 2) reduced air-circulation from furniture, thereby reducing the benefit from heating, increasing the relative humidity, 3) it is probable that an absorbent plaster or filler was used to complete the installation around the furniture and wiring. 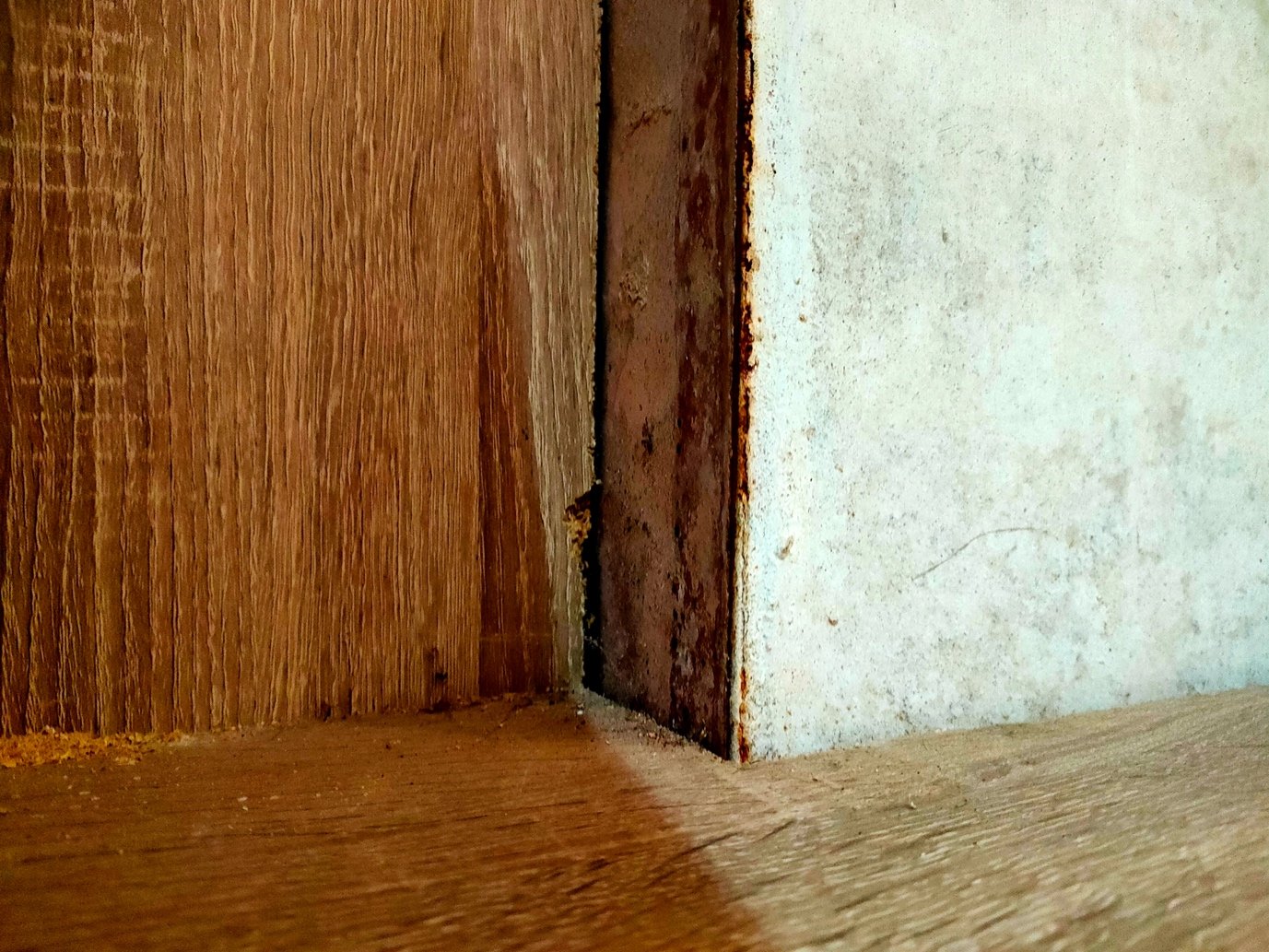 There is mould and rust at the base of an internal kitchen cupboard. 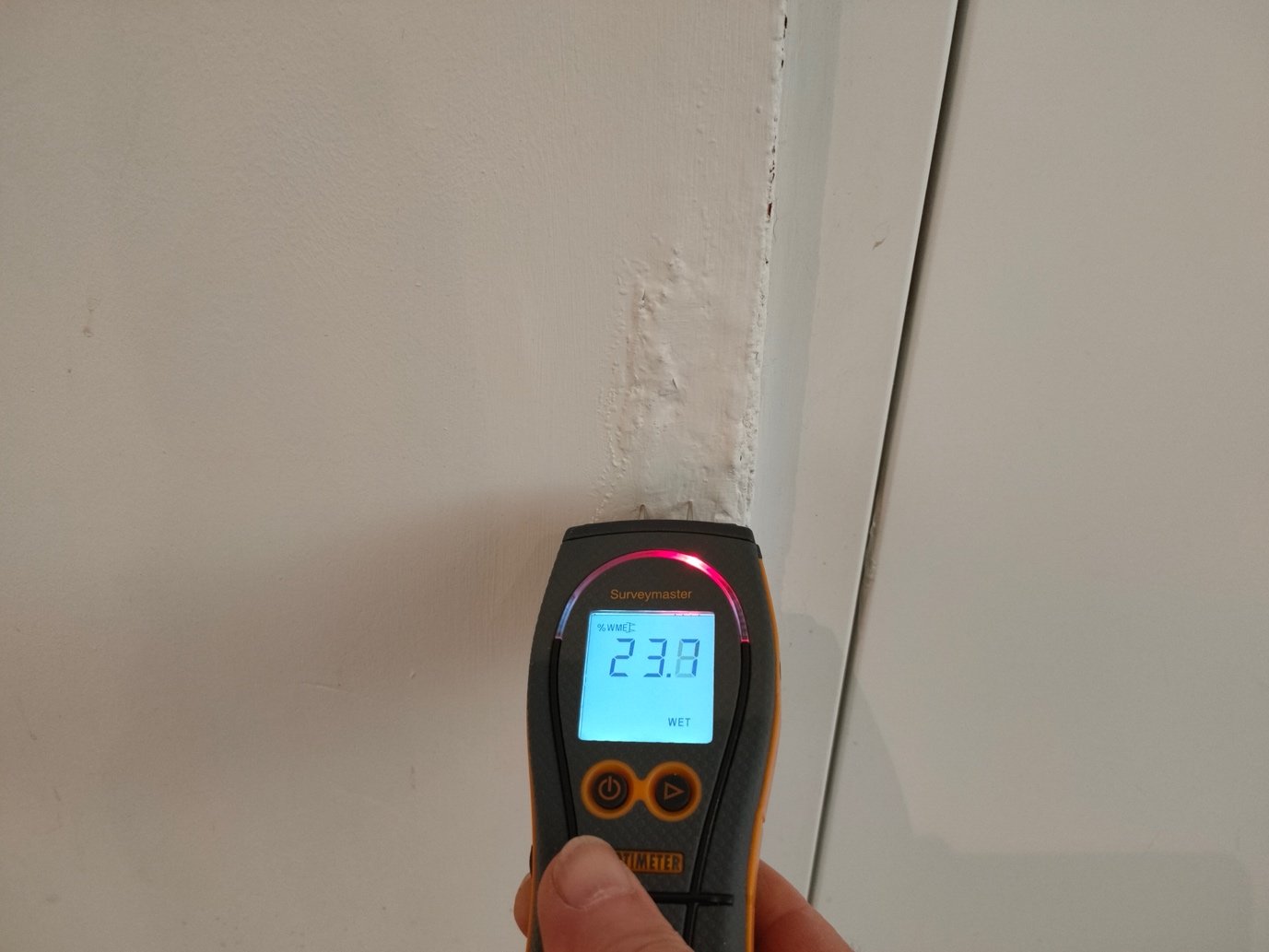 Dampness is high on an internal kitchen wall by the plasterer’s beading.

The floors are solid, probably made of a concrete screed. FACT: solid floors are prone to condensation as the ground is typically the colder than walls, increasing the risk of condensation. TIP: plaster should not touch a solid floor. The issue is 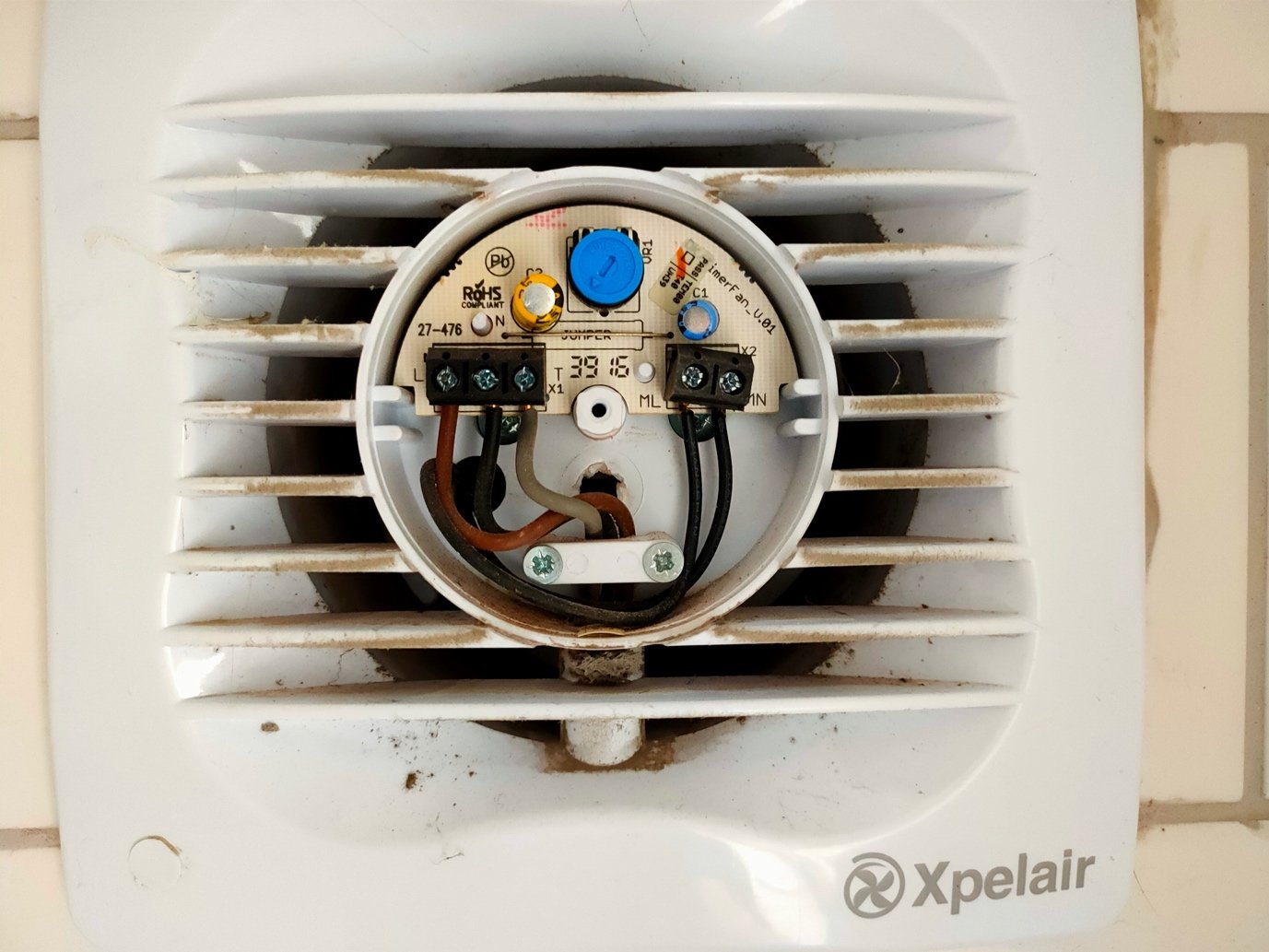 The bathroom extractor fan is running fast, but was set to stop after about 15 minutes.

FAFT: 90% of vapour remains in a bathroom after lights are switched off typically. TIP: bathroom extractor fan overrun. The blue dial in the above image, can be adjusted, clockwise to extend it, which I did during the survey. This alone could have stopped damp. 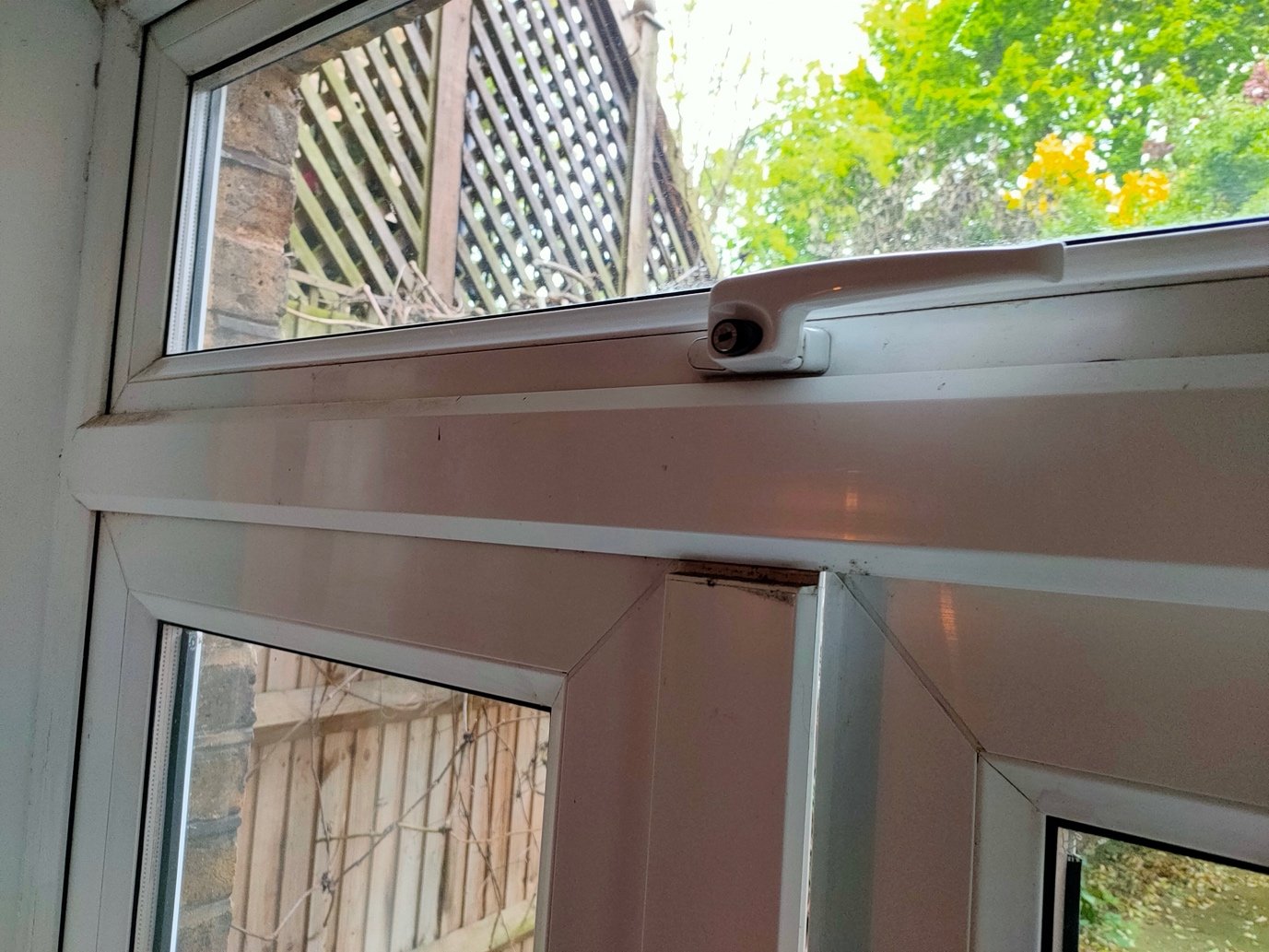 There is very little background ventilation.

TIP: keep windows open on the safety lock, it is as good as using a trickle vent. 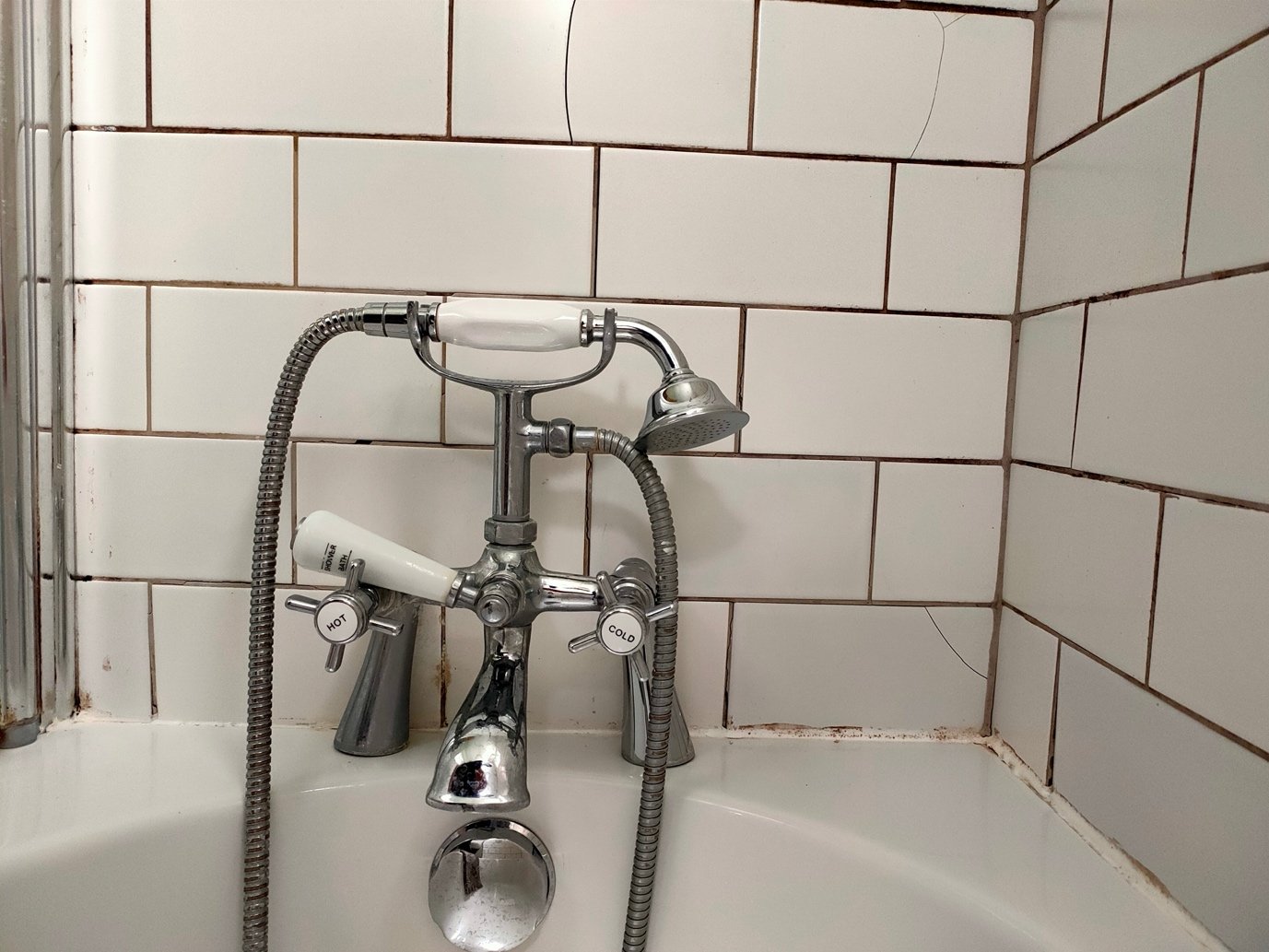 Cracks to bathroom tiles could result in water being absorbed into the wall. 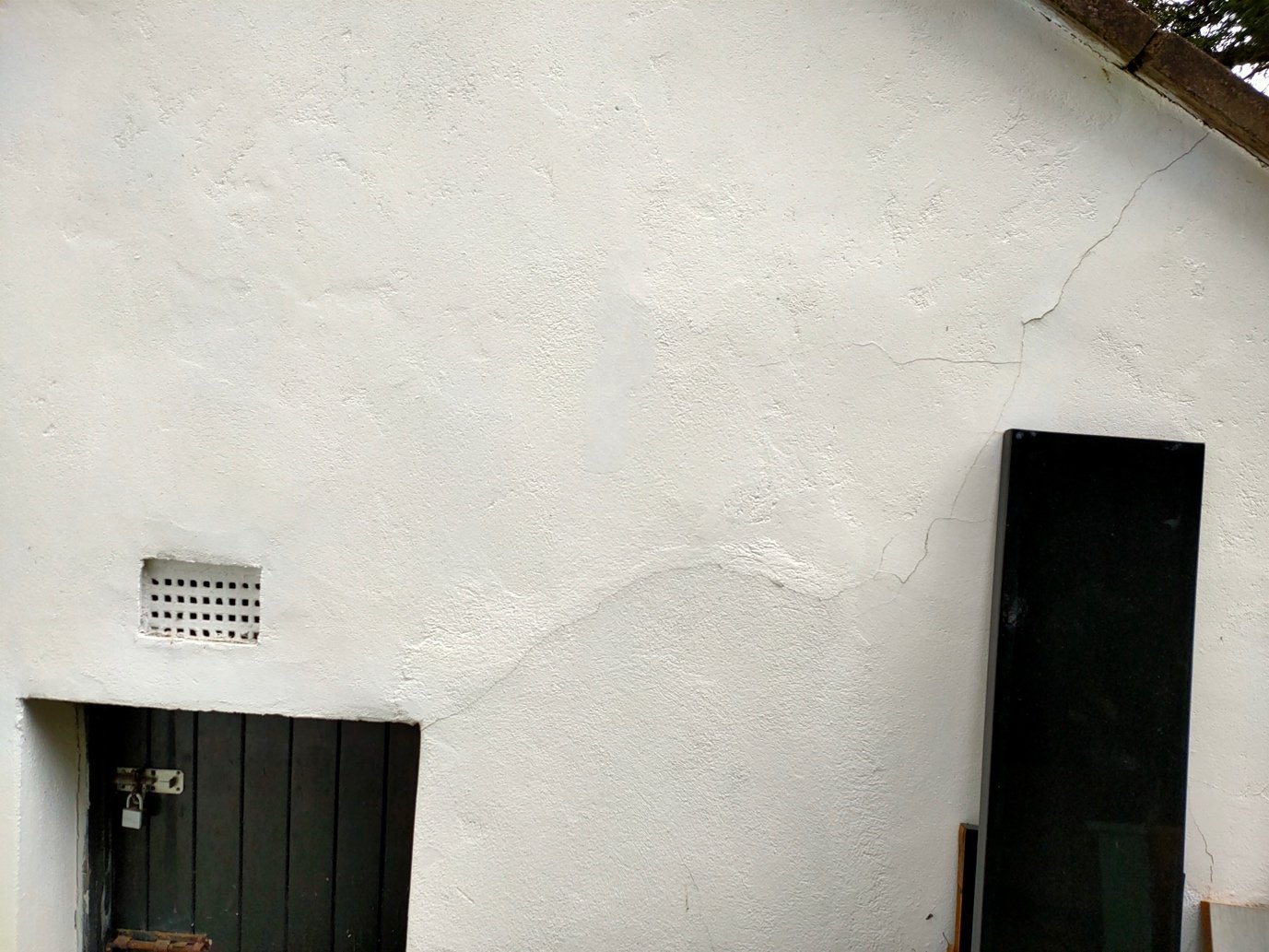 There are render cracks around the property. These are probably the freeholder’s responsibility.

FACT: penetrating damp where water travels through bricks or timber normally leaves a brown stain. FACT: dampness in bricks reduces insulation by about 50%, increasing the risk of condensation and mould. FACT: horizontal cracks cause more ingress than vertical cracks. FACT: render cracks suck in water, but render stops water from evaporating out. 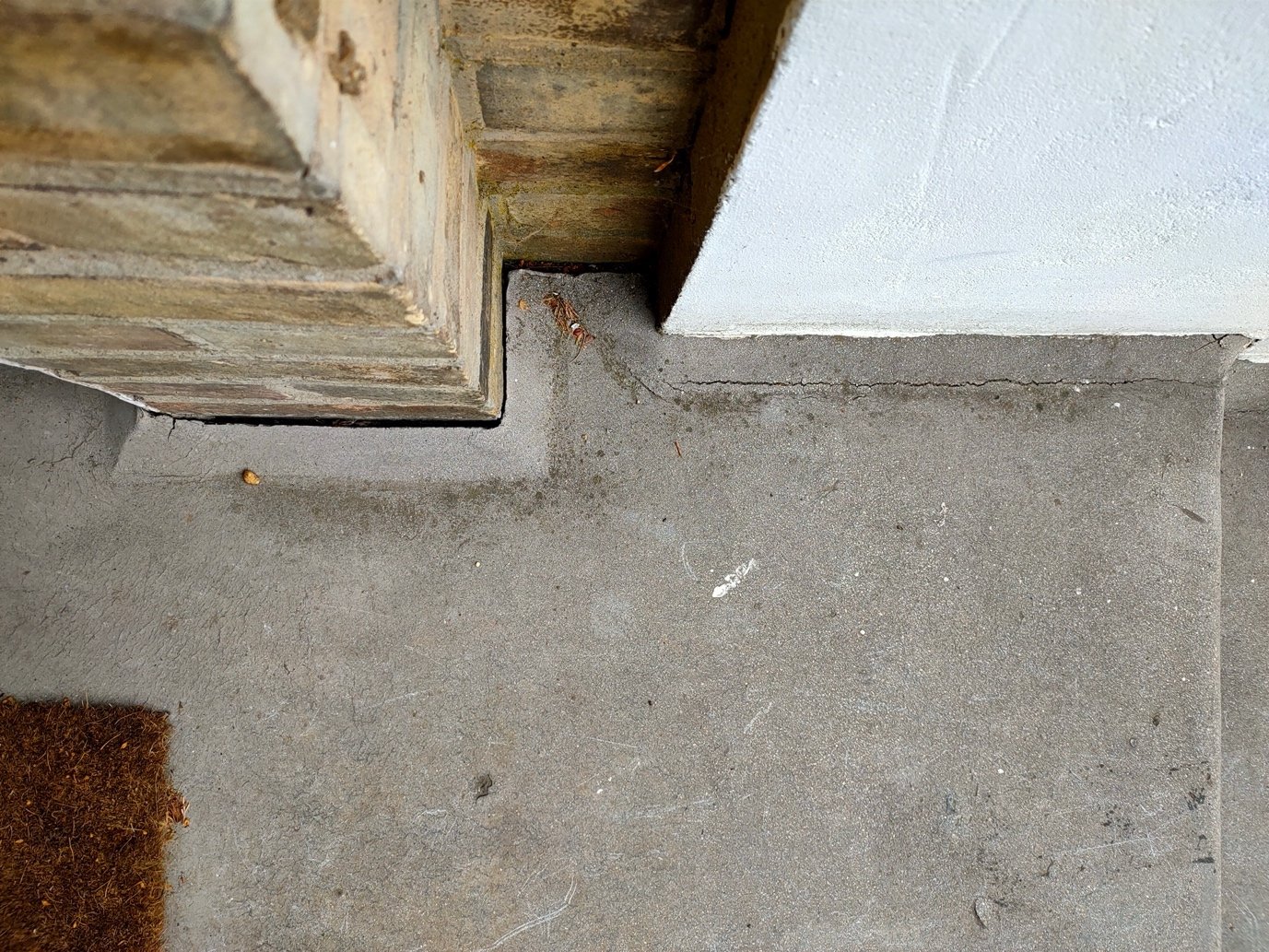 Gaps in the surface above the kitchen should be filled in.

The down pipe from above the bay appears to be undrained. There are cracks in concrete base.

This is presumably a freeholder responsibility. The drain should be cleared. Make sure it is effective. Cracks should be filled with a similar cement-based mortar. Check slope to drain.

TIP: Observe and film around the property during a rainstorm to see where water flows, making sure water flows/drains away from the building. Check every 6 months. 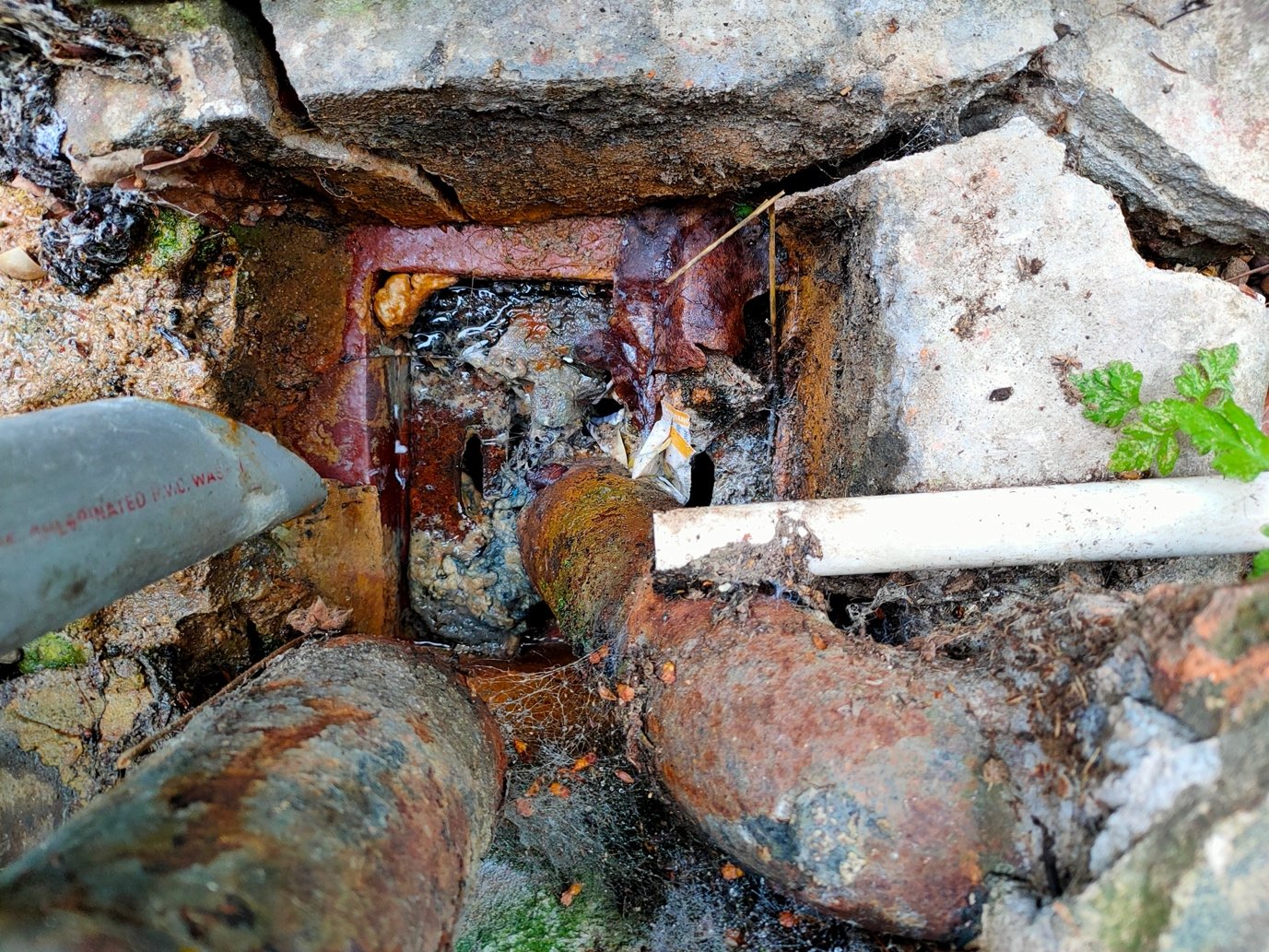 FACT: drain leaks are often misdiagnosed as rising damp. Given the state of the drains and the previous damp proofing treatment, the freeholder should commission a CCTV drain survey. 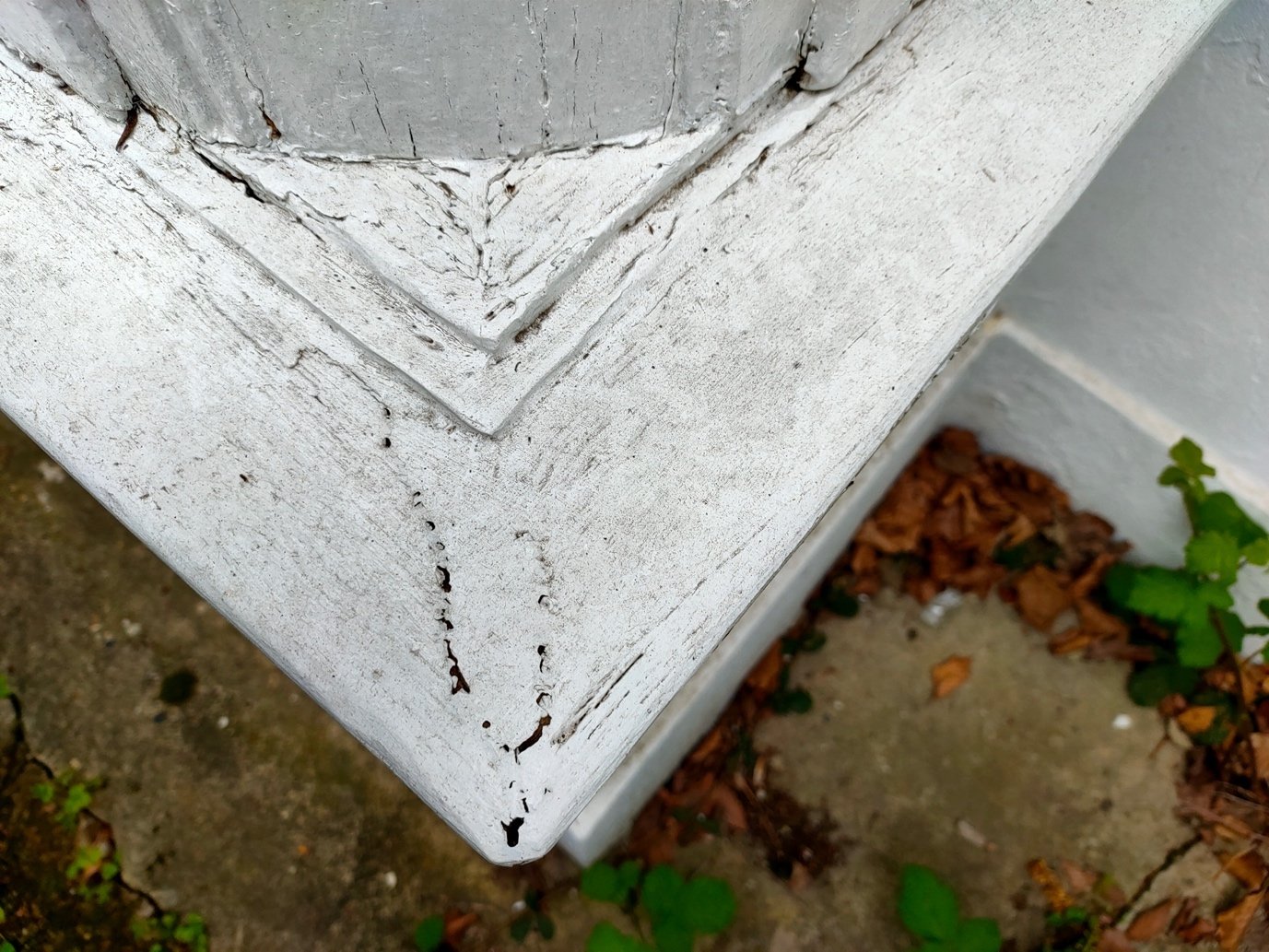 Timber is at risk of window rot if it is not regularly painted.

TIP: check for unpainted timber, gaps around windows and render cracks, fill and paint as required.

This is a graph from your datalogger and a comparison to external temperature and dew point.

Relative humidity is a measure of how much vapour is in the air compared to air’s capacity to hold vapour. It is a function of vapour pressure (quality of vapour) and temperature. As temperature rises, air can hold more vapour. Conversely as temperature drops, air holds

Dew point is the temperature where condensation takes place. It is also a proxy the vapour pressure. Comparing the dew point of one area to another makes it possible to see where vapour is being generated or conversely removed (normally through ventilation).

In conclusion from the dataloggers

A general builder can complete most work. CheckaTrade.com, trustatrader.com and trustedtraders.which.co.uk are good sources of general builders. Once the recommended remedial actions are completed and the walls allowed to dry, dampness will not have a material impact on the value of the property.

It is the client’s responsibility to check that a contractor has sufficient insurance and competence to undertake any work that we recommend.

Visible effects: mould and condensation, mould to all corners.

The property is an a semi-detached Victorian lower ground floor flat with a solid wall made of two brick widths (225mm). The front door faces north.

Changes to the property’s original design

Properties are not designed and built with damp problems. Understanding changes to a property since first inhabited is the starting point for tracing damp back to its root cause.

Bathroom extractor (nearest damp wall) The extraction rate was 14.3 l/s (the Building Reg. minimum is 15 l/s). The extractor overrun was 15

minute(s) after the light was switched off. It should overrun for at least 30 minutes.

I extended the bathroom extractor fan overrun to 30 minutes. Note is slightly noisy and in my experience probably resulted in the tenant turning the fan off on the isolator.

Kitchen ventilation
The kitchen does not have an externally ducted extractor fan.

Thermal imbalance
The main source of unvented vapour appears to be the bathroom, kitchen and from drying clothes internally.

Ventilation improvements
Keep the bathroom door closed. In addition, dry clothes in a vented room or vented tumble drier (externally ducted). Install an externally ducted extractor fan to the kitchen. Keep heat balanced across the property and across the day and night so that the wall temperature doesn’t drop below the dew point. Consider retrofitting trickle vents into double glazed windows.

Ventilation overall
The main source of unvented vapour appears to be the bathroom, kitchen and from drying clothes internally. You should consider upgrading your ventilation. In the meantime, keep a balanced heating system and wipe away mould and condensation as soon as it appears.

The drains seem to function correctly.

There are no suspicions of significant timber decay.

There are no obvious signs of a significant mains or wastewater leak.

Sub-soil rocks: Rocks with essentially no groundwater.
Signs of groundwater: rising damp is not of concern.

Therefore risk of rising damp is highly unlikely, see a good explanation by

Despite the low risk of rising damp, there has been an attempt at treating the building with chemicals to stop rising damp.

The property was reasonably uncluttered, which improves the distribution of warm air currents, but is unlikely to have been when tenanted.

By taking a root cause approach, rather than a focus on blocking the symptoms of damp the savings are likely to be around £5,000.

There are no outstanding matters. The remedial actions should resolve the highlighted damp issues. If they don’t, and the wall is given sufficient time to dry (6 – 10 months for any form of remedial treatment).