This London flat was interesting for many reasons:

Conclusion from the datalogger

I was sent me a comparable week from last year when the flat was occupied.

The consistently high relative humidity in 2020 and explanation for why this is, accounts for most of the dampness in the master bedroom and kitchen. 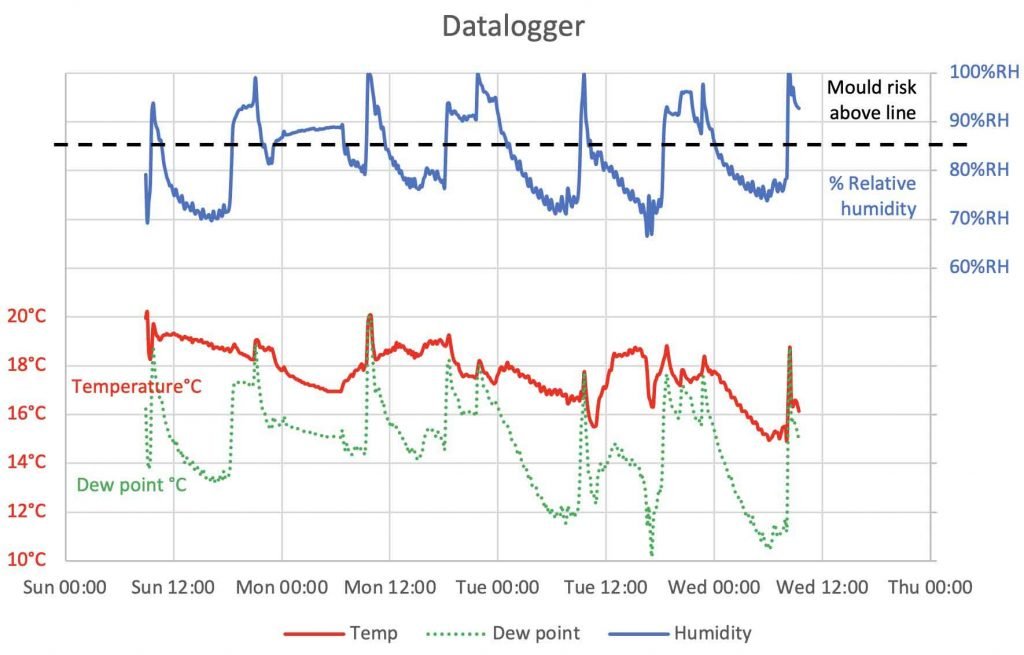 Here is a typical example from a property suffering from mould and condensation. Note I have slightly changed the scales and added extra information.

This graph shows that the example property is constantly exceeding 85%RH (% relative humidity), risking mould and dust mites. It spikes at the dew point 100%RH when condensation forms. We can see vapour is highest around 9AM and 10PM, suggesting the bathroom is the primary source of dampness and mould. Follow my recommendation and monitor improvements.

The green dotted line is the dew point, a calculated field, that provides a proxy for quantity of vapour. Mould point is typically about 2°C above the dew point. Comparing results from two dataloggers, helps identify the source of vapour. Laser thermometers measure wall temperature, see mouldpoint.co.uk for surface relative humidity and mould risk forecasts.

The main damp issue solved during the survey 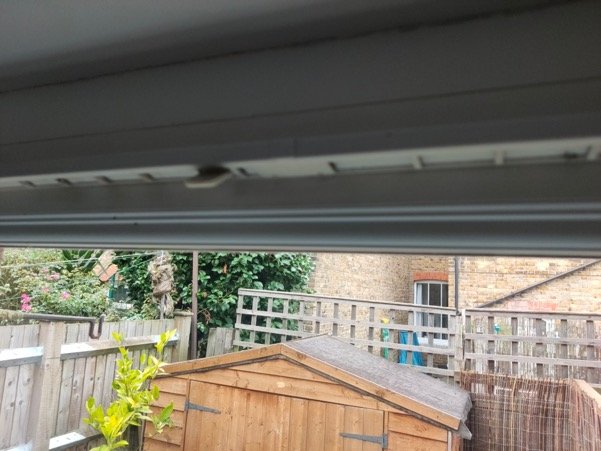 The cause of the damp is insufficient ventilation. None of the trickle vents were open, so the property was effectively hermetically sealed. I opened trickle vents during the survey. 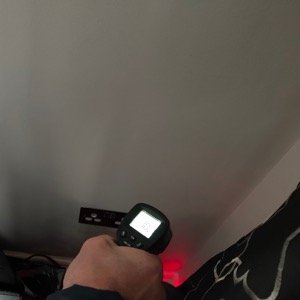 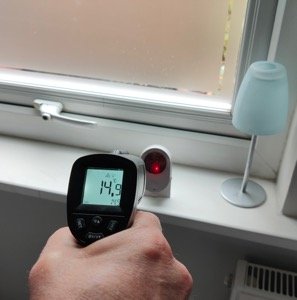 I moved objects away from damp walls, to improve circulation of warm air from radiators, together with the open trickle vents, this should solve your main damp problem over time. 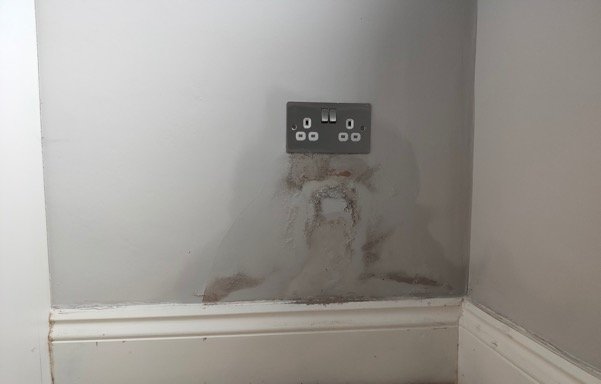 There is a damp patch to the master bedroom. Sockets are prone to dampness as a section of wall is cut out, a metal box installed and covered in absorbent plaster, all of which exacerbate the effects of condensation and absorption, see surveyor.tips/sockets.

There appeared to be calcium sulphate salts on the surface. Calcium sulphate is a key ingredient in cement and other building materials. If diluted in water, salts tend to move to the surface. These can be dried and removed with sandpaper prior to being decorated. 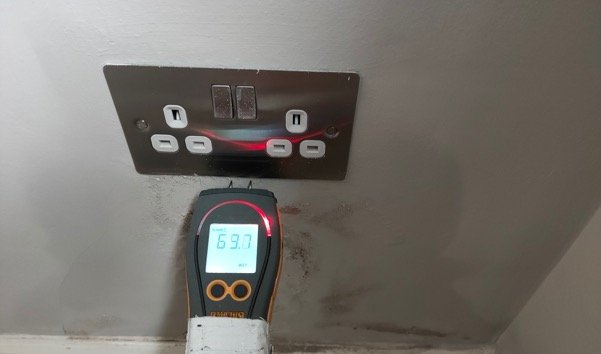 I tested the surface on the inside at the base of all external walls every metre, chimney breasts and a sample of internal walls with a Protimeter damp meter in conductance mode. These meters measure electrical conductance of salts in water, a proxy for dampness.

Readings below 20WME are considered dry. The range is 8WME to 99WME. See surveyor.tips/dampmeter. Walls measured were largely dry on the surface except where mentioned in this report. Here the wall is clearly damp, very damp. 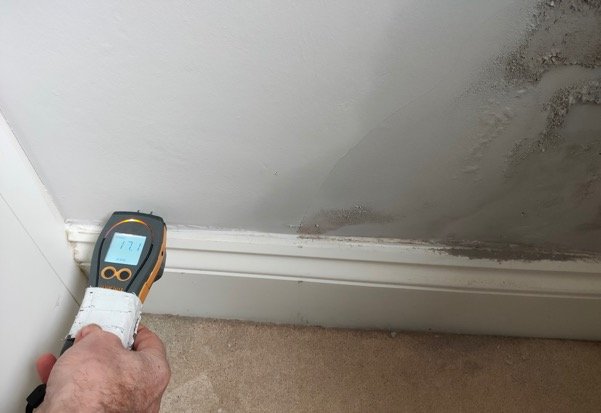 The base of the wall is dry a short distance away, which it would not be if there was rising damp, as rising damp is from groundwater which rises evenly up a wall like flood water.

Note I checked and found no signs of penetrating damp, or relevant external damage. 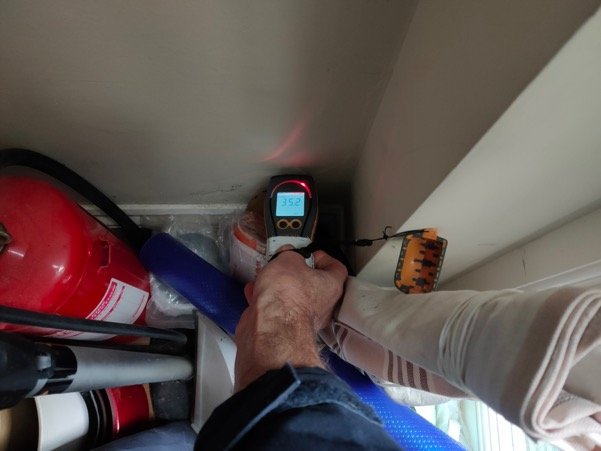 There is dampness to the rear of the kitchen wall behind various objects. 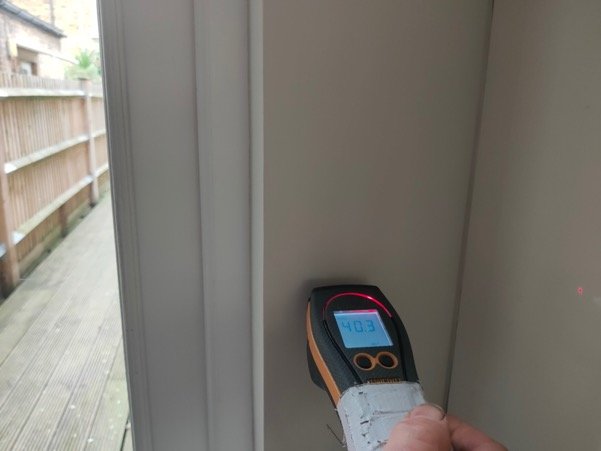 The dampness in the kitchen extends to about 1.5M above the floor. Walls around openings are almost always poorly insulated and therefore at risk of condensation. Again the profile of damp was not consistent with rising damp. 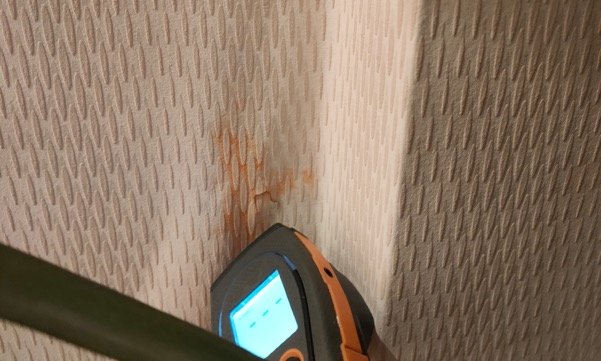 There was a stain and some slightly loose wallpaper in the corridor. It was dry, so I assume that the stain comes from another source. 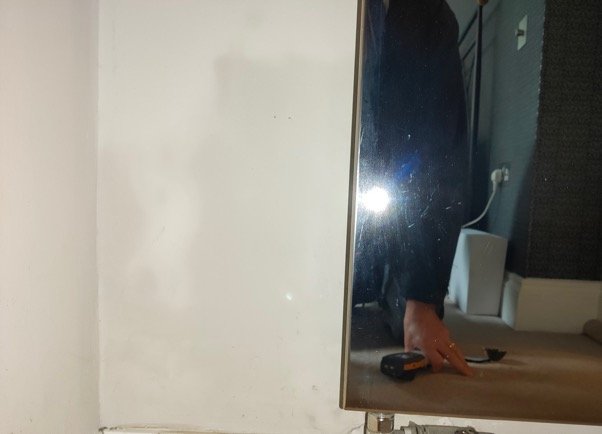 The master bedroom right-hand flank wall is damp up the left-hand side of a warm radiator. 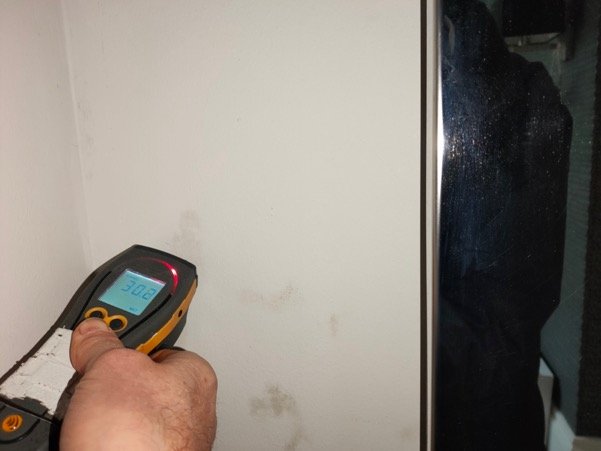 Again the damp meter recorded high readings on the surface. The damp patches were discrete reaching to about 2M above ground. There was no brown tea bag stain like discolouration, the tell-tale sign of penetrating damp from rainwater.

The patches were vertical and not horizontal as would be the case if there was rising damp. 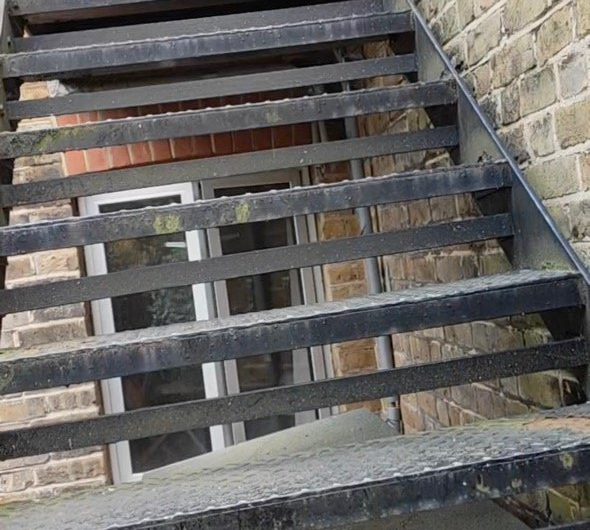 Looking immediately outside we see slight algal growth, a sign that water is bouncing off the wrought iron staircase, and potential thermal bridging, increasing the risk of condensation. However, the profile of the internal damp was inconsistent with these external issues. 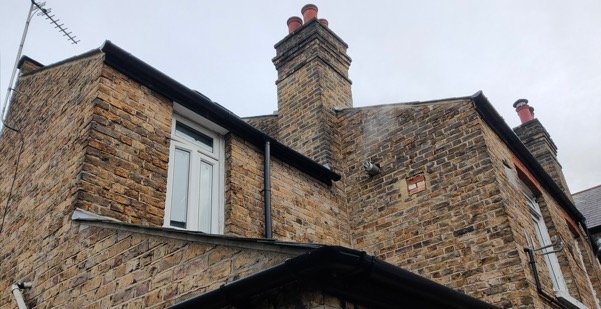 The profile of the internal damp patches is consistent with either condensation or hygroscopic salts that cause condensation at a normal humidity levels – see later.

Looking back up at the building, we can see two chimney stacks. The rear stack is above the damp patch. Hygroscopic salts come from manure or the historic burning of manure briquettes or coal see surveyor.tips/hygroscopic. Calcium nitrate is the most common. 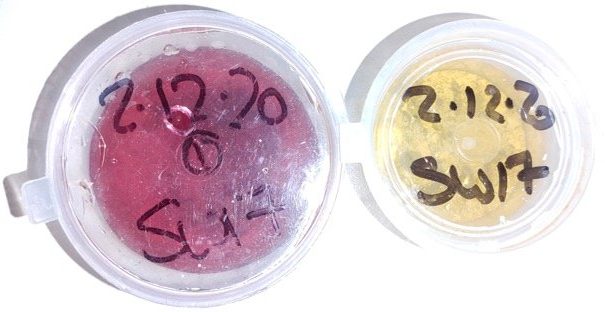 Two samples of salt tested: the positive, red result is from the wall by the silver radiator.

the negative, yellow result is from the salts under the sockets.

Nitrates are found in soil, so water passing through soil will contain some nitrates. Groundwater and in the case of London, the mainswater is high is nitrates. Damp stains caused by hygroscopic salts from old chimney breasts are normally very high in nitrates.

The result of the chemical analysis is that the concentration of nitrates is very high, supporting my conclusion that the damp on the master bedroom right-hand flank by the silver radiator has hygroscopic salts, causing condensation at normal levels of humidity.

This supports my conclusion that the dampness under the master bedroom sockets is caused by condensation. 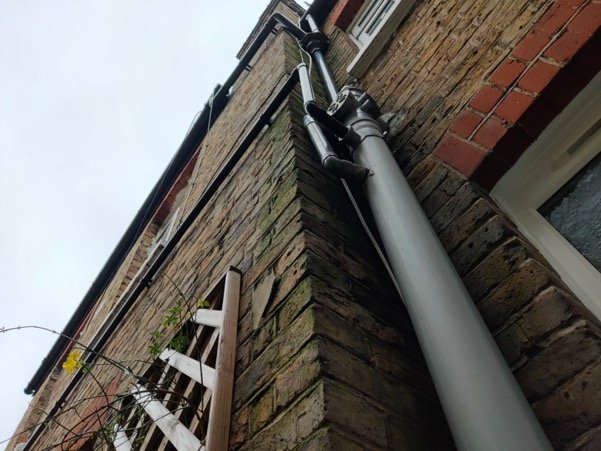 There is algal growth on the outside of the side return. It appears to originate from the upstairs rainwater hopper, which probably needs unblocking. 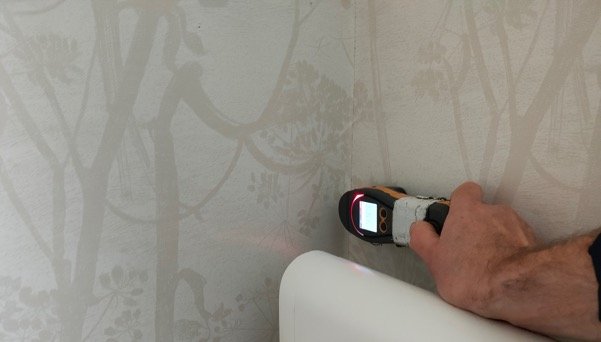 I measured the surface of the corresponding internal wall and found it to be dry. However, using a more sensitive, but less accurate radio frequency damp meter, I detected damp deep within the wall.

There is no decorative spoiling of the internal wall. However, it would be wise to observe the outside during a rainstorm and if as I suspect the hopper is blocked, you should clear it or the gutter above. 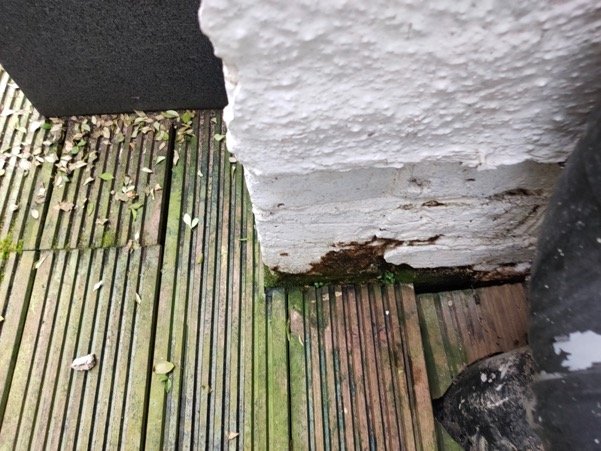 There is also an exposed surface of the wall in the same corner, below the damp proof course. It would be wise to touch up the paintwork. 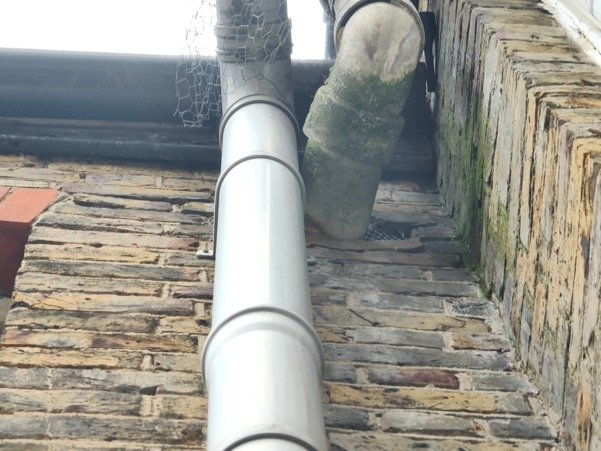 There was another damp patch under the upstairs gutter. This appears to be localised and not of consequence but should be monitored and notified to the upstairs neighbour. 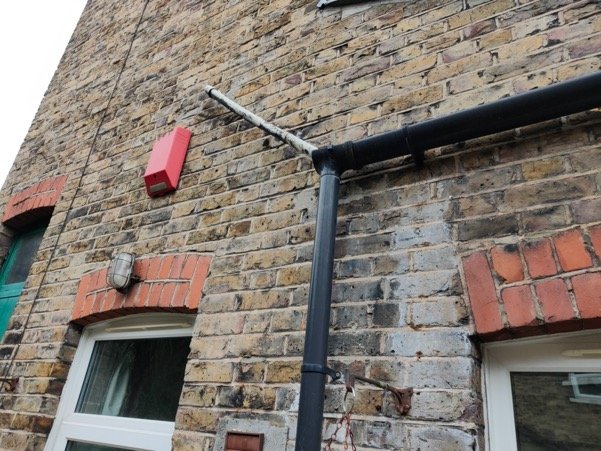 There is an efflorescent stain under some guttering to the rear. This appears to be old and not of consequence but should be monitored and the gutters checked twice a year. 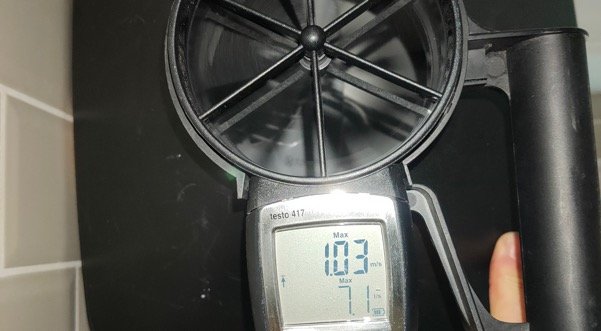 I measured the bathroom extractor fan and found that it is running at about 50% of Building Regulation 2010 Part F requirements. This flow rate is very common. Ventilation is most effective when air is extracted close to the vapour source; bathroom, kitchen, drying clothes and occupied rooms, best achieved with mechanical extractor fans. Low flow rates can be mitigated by running fans for longer. See surveyor.tips/vent_regs specifically P39 and P19: